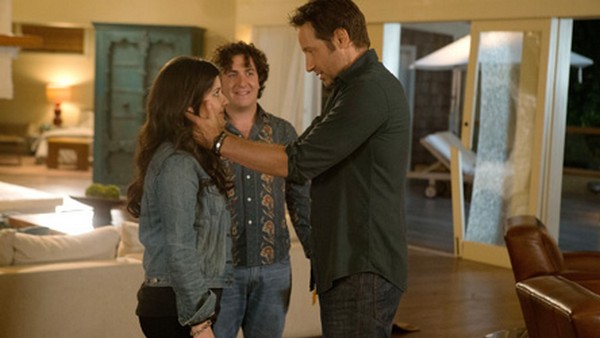 Tonight on Showtime Season 7 of CALIFORNICATION airs with its tenth episode called, “Daughter.” On this evening’s episode, the ratings are in for ‘Santa Monica Cop’ – and Hank may soon be out of a job, which sends Charlie reeling.

On last week’s episode Hank enticed Karen into dinner, but Julia interrupted their romantic evening. Later, Charlie, Marcy, Krull, and Levon brought even more drama to the table. Rath showed up with Eddie Nero, who’s in “research mode” for an appearance on ‘Santa Monica Cop.’ And Stu’s assault on Charlie’s manhood sent the night into chaos. Did you watch the last episode? If you missed it, we recapped it all right here for you.

On tonight’s episode, with the revenue stream drying up Marcy decides to accept Stu’s offer. Karen arrives with a special guest: Becca, who makes a big announcement. However, Levon spoils Karen’s plans for a family reunion. Also, the ratings are in for ‘Santa Monica Cop’ and we may soon see Hank out of a job which doesn’t sit well with Charlie.

Tonight’s episode looks like it is going to be great and you won’t want to miss it, so be sure to tune in for our coverage of Showtime’s Californication at 9:30 PM EST! While you wait for our recap hit the comments and enjoy the sneak peek preview of tonight’s episode below.

The ratings are in for ‘Santa Monica Cop’ – and Hank may soon be out of a job, which sends Charlie reeling. With the revenue stream drying up Marcy decides to accept Stu’s offer. Karen arrives with a special guest: Becca, who makes a big announcement. However, Levon spoils Karen’s plans for a family reunion.

Tonight’s episode begins with Hank, Julia, and Levon watching Santa Monica Cop. Hank falls asleep but when he wakes up Julia and Levon share how horrible the episode was. After Levon complains that he works for such a terrible show, he is off to bed. Julia comes on to Hank when they are alone, so they head off to the bedroom. Levon comes into the room, interrupting the two, because he is having a bad night and needs some comforting. He shares that he is also worried about the show being cancelled and all of them being out of a job. Julia leaves Hank all alone as she goes to comfort Levon.

The next day, on set, Rath comes in and tells everyone production is closing and they are all on hiatus as of now. Levon is upset and tries to get everyone to fight this injustice, but Rath shares with Hashtag and the gang that America did not like Hashtag. Meanwhile, Charlie gets the call from Hank and shares the news with Marcy. She is upset knowing she has no choice but to sleep with Stu. Charlie begins to cry knowing his wife will have to sleep with Stu, and that he could not provide for his wife. She tells Charlie that since she is going to have to be with Stu she will allow him one night with another woman so it is fair. She doesn’t want to know anything about it, and it can only be one time. Charlie gets excited about the idea, as does Marcy and the two end their discussion with a quickie.

Rath and Hank meet to discuss the ending of the show. Hank asks what is next for Rath, and he shares that he’ll likely move to another show from the studio. He asks what is next for Hank. Rath tells Hank that he has what it takes and he should consider writing a show of his own. He tells him to write a show about his life…his kids, Karen, Julia, etc. Hank promises to think about the idea.

Later, Charlie meets a sexy woman at the bar, and gives her a compliment after noticing her across the bar. She buys her a drink. She asks if he is married, and he says they have sort of an arrangement. Charlie describes in detail, as she eggs him on, what he would do to her in the cheap motel he suggests they go to. As she seems to be just as turned on as he is, she asks for more details. He begins to get up and show her how he can “work it” from behind. Just then a very large man walks up and Charlie asks who he is. The woman introduces her boyfriend to Charlie and Charlie ends up with a punch to the face after the woman tells her man what Charlie was planning for the two. This may not be as easy as he thought!

Meanwhile, Hank tries to encourage Levon not to get down about losing his job. As Levon is eating pizza, the doorbell rings and Becca is at the door. Levon welcomes him. Becca seems very surprised and confused, but just as Hank walks in the room, Levon pushes Hank to tell Becca the truth. Just then Julia walks in and knows Becca as well. Becca is really confused now, and cannot understand how all these people she does not know, seem to know her. Julia is so excited to meet her and says how great it is for her to finally meet her brother. “My brother?” Becca asks. Julia spilled the news before Hank got a chance and now Hank feels terrible.

Marcy goes to see Stu. Stu practically jumps for joy when Marcy shares that she is willing to go through with the offer. Marcy tells him that they should get this over with as soon as possible. They want to get started right away, but it just isn’t right, so they plan to make it happen the next day. Marcy signs a couple contracts and heads out as Stu goes to his bedroom to practice on his Marcy-lookalike mannequin. CREEPY!

Becca is getting the scoop as Karen, Becca, Hank, Julia, and Levon sit around to discuss how Becca came to have a brother. Levon get very pushy wanting to immediately start up a relationship with his sister, but Becca is not so willing and gets upset when Levon calls Hank “dad.” Levon gets very upset then when Hank tells him to take it down a notch and Julia has to calm him down when his jealousy gets the best of him. Hank asks about Becca’s recent trip and her boyfriend.

Becca gets upset when Hank cannot even remember her boyfriend’s name. She shares that she is getting married and Hank tells her she cannot. She wants to walk out, but Hank wants to talk to her more so the two talk privately outside. Hank tells her she is too young to be married. Becca tells Hank it feels right to her and she wants to go with her gut, despite Hank’s advice to wait. Becca reminds Hank of all he’s put her through and she tells him it is happening and she is not going to let him make her feel miserable about it.

Next week is not only the season finale, but also (sadly) the series finale, and we’ll be recapping it for you. So don’t forget to check back next Sunday!