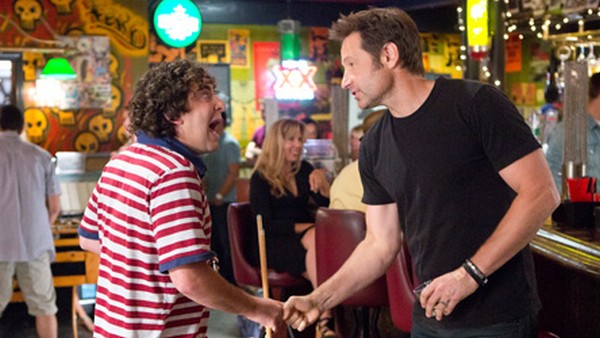 Tonight on Showtime Season 7 of CALIFORNICATION airs with its season finale called, “Grace.” On this evening’s episode, Hank makes a life-altering decision.

On last week’s episode with the revenue stream drying up Marcy decided to accept Stu’s offer. Karen arrived with a special guest: Becca, who made a big announcement. However, Levon spoiled Karen’s plans for a family reunion. Also, the ratings were in for ‘Santa Monica Cop’ and we soon saw Hank out of a job which doesn’t sit well with Charlie. Did you watch the last episode? If you missed it we have a full and detailed recap, right here for you enjoyment.

On tonight’s episode, Season 7 ends with Hank making a life-altering decision. Meanwhile, Karen steps in to smooth over the situation when Hank doesn’t approve Becca’s plans. Later, Hank and Levon reconnect with Hank’s old student Tara; and Hank reassures Julia and invites her to a special dinner.

Tonight’s finale looks like it is going to be great and you won’t want to miss it, so be sure to tune in for our coverage of Showtime’s Californication at 9:30 PM EST! While you wait for our recap hit the comments and enjoy the sneak peek preview of tonight’s episode below.

RECAP: Hank does not agree with Becca’s plans; Hank and Levon reconnect with one of Hank’s old students; Julia gets reassurance over dinner; Charlie is urged to save Marcy. Karen massages the situation – even though Hank is still not on board with Becca’s plans. Later, Hank manages to reassure Julia over a special dinner, urge Charlie to save Marcy, plus, make his own life-altering decision. Series finale.

Tonight’s final episode begins with Hank having a nightmare of Becca taking her life by falling from a bridge after telling him how the damage he has done has affected her view of relationships. He wakes up in a cold sweat to find Charlie in his bed wanting to sleep over after a fight with Marcy.

Hank goes to see Becca and runs to Karen’s to ask where she is. She tells Hank that Becca left to meet her fiance’s parents. Karen reminds Hank of some of the mistakes they’ve made as she explains it as “their story” as she tells Hank that it is understandable that Becca wants something better. While their discussion gets heated, Hank gets a frantic call from Julia about Levon as Karen continues to pack to follow Becca.

Charlie is upset with Marcy as he sees her all dressed up to head over to Stu’s house. Charlie is very insecure over the whole thing, and Marcy is trying to be understanding knowing how hard it is on him.

Julia and Hank are picking up Levon from the police station after he was arrested. They are both upset with him with Julia crying that he now has a criminal record. She blames Hank saying it was all HIS fault. Levon was arrested when he was caught trying to pay for sex. Hank talks to him at the bar about getting real relationships and stopping with the hookers. A girl at the bar grabs his attention and Hank encourages him to make a move. The woman is the former student of Hank who they’ve met before, but still Levon screws up the entire conversation by saying all the wrong things. She seems to feel sorry for him and decides to cut him a break by agreeing to have a drink with him. Hank gives him a little pep talk while the woman goes to the bathroom. He takes off after a few words of encouragement. He goes to see Julia and tells her that everything is okay with Levon. Hank tells her that Levon is the best surprise of his adult life. Julia and Hank kiss. He stops and says he wants to do things right. He tells her he wants to take her out to dinner later. As he walks out, he tells her to wear her best dress.

Krull brings over two hookers for Charlie. When Hank arrives home he finds Charlie in his bed with a hooker, but Charlie could not get it up and the hooker was pretty disappointed. Krull is in the living room having fun with the other hooker. Charlie gets up to leave and get dressed. Meanwhile, Stu goes over all the things that he and Marcy have done since she arrived…swam, meditated, had massages, etc., and he cannot wait any longer for the promised sex. He blows up at her and runs to the bathroom. While he is in the bathroom, Marcy finds the Marcy-Mannequin and gets very creeped out. When Marcy goes to leave, Stu throws her on the bed and Marcy struggles to get out of his hold. Just then Charlie comes in and throws Stu off of her. After Stu runs after them as they are leaving, complaining that he wants his money back, Charlie finally explodes and tells him he is not giving back a penny and he could ruin him if he let it be known what Stu did. Stu has a change of heart and starts confessing for his wrongs, crying and hugging them, begging for forgiveness. He tells them to keep the money as his way of making up for what he’s done. Stu, in red speedos, hugs an uncomfortable Marcy and Charlie.

As Julia sits at the restaurant hank promised to meet her at, she is approached by Rath and the two realize they have been set up by Hank. They both decide to stay afterall and have dinner together. Meanwhile, Hank is alone in his car dreaming Karen is next to him, but she is not. He sees a plane flying over his head and knows he needs to go to her. He rushes to the airport, gets a ticket, and jumps on the plane to catch Karen before she leaves. The woman next to Karen won’t move out of her seat to accommodate the desperate Hank. Hank gives Karen a letter he wrote, but she won’t read it. He tells her that he will then have to read it out loud himself. She tries to stop him, but he begins reading his letter. It is his mea culpa to her, telling “their story” as all the passengers melt upon hearing it. He tells her he didn’t finish the story because it is not over…it will never be over. As long as there is grace and there is hope, it won’t be over. The woman next to Karen cannot help but get up at that point so Hank and Karen can sit together as they go support Becca. He tells Karen “til the f*in wheels come off baby” as he holds her hand and their plane takes off. They smile at each other knowing their story is not over.

As Rocket Man plays, we get the chance to see Stu having wine and dinner with his Marcy doll, Levon having a great time with his lady friend, Julia and Rath kissing, Marcy and Charlie holding hands and enjoying each other’s company, and lots and lots of old memories of Hank, Karen, and Becca. The last scene shows Karen and Hank kissing.

We are so going to miss this show but happy it ended with Hank and Karen together. What did you think of tonight’s season/series finale? Uneventful or just right? Tell us below.