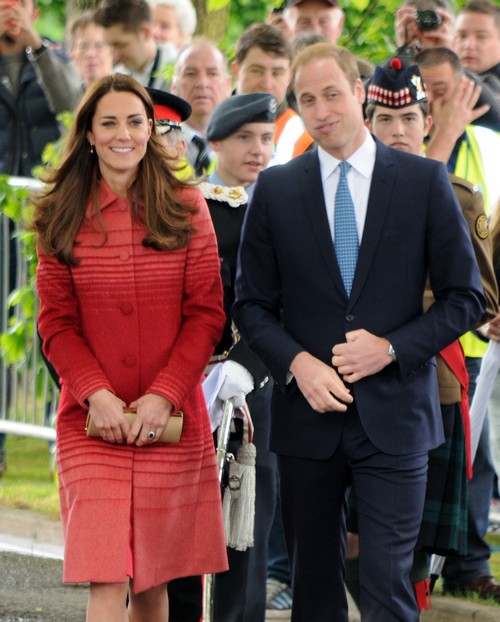 Kate Middleton and Prince William landed in Scotland with smiles on their faces, acting as if nothing was wrong. Unless you’ve been under a great big rock then you already know that earlier this week a German magazine published a photo of Kate’s bare bottom on display as a wind gust blew her skirt up. It’s not the first (or even third) time such a thing has happened and that has led to a debate over whether or not Kate enjoys this type of attention.

No one was more ready to crucify Kate than Camilla Parker-Bowles who hates the duchess simply for being everything that she is not. Camilla hates that Kate gets rave reviews and even when she screws up the royals – including Queen Elizabeth rush to protect her. It’s a courtesy that has never been handed to Cami and one of the reasons that Prince Charles’ wife drinks like a sailor. Since the press was speculating about Kate’s rebellious behavior (really, how hard is it to put on a pair of spanx?) Camilla thought that maybe, just maybe some of that support for Kate would waiver. Instead the queen has already forgiven the misstep and it’s business as usual for Kate who spent her first day in Scotland swaddled in a nice red coat.

Of course Camilla’s reaction has been to hit the gin bottle and to fight with Prince Charles. According to the current issue of GLOBE Magazine he recently stormed out on his belligerent wife and this current twist has certainly continued to strain things. The message is clear, Kate can do no real wrong while everything that Camilla does is wrong. Even when there is an opportunity for Elizabeth to change her opinion, she doesn’t. Is this the point where Cami gives up and goes forward with those divorce threats? She has made it clear that if she can’t be queen then she expects the royal family to buy her silence. What will Camilla’s next move be? Tell us your thoughts in the comments below!