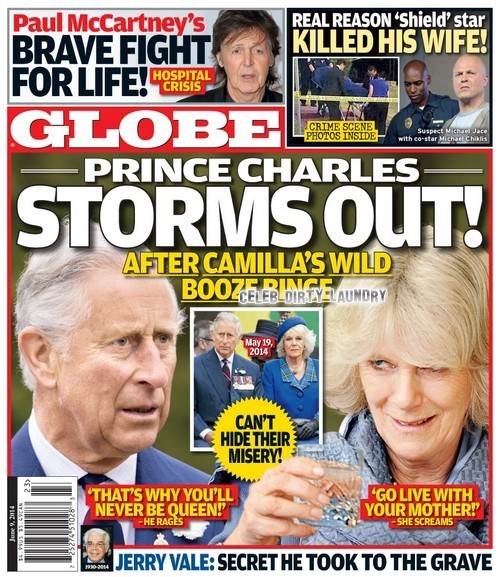 We have been telling you for over a year just how awful Prince Charles’ marriage to Camilla Parker-Bowles is. These two are constantly locked in battle over nearly everything. The biggest issue is Charles’ birthright. While sitting atop the throne has never been huge on his list of things to accomplish good old Cami has been on a mission to be the next Queen of England for more than 30 years and she is not about to let this opportunity pass without a fight. According to the June 9th print edition of GLOBE magazine Camilla told Prince Charles to go back to live with his mom, Queen Elizabeth, after the usually heavy drinker downed even more gin.

Charles isn’t exactly enjoying the fact that he is married to an angry drunk and after one particularly ugly fight he actually stormed out of the palace that the couple shares. Of course Cami had to get in the last jabs and ordered him to run back to his mommy. I’m not sure if Charles really did land on the Queen’s doorstep but the evening was one more example of how the relationship is failing on a grand level.

I think everyone was surprised last week when The Shield’s Michael Jase shot and killed his wife while their two small children were in the home. As more info came out we learned that Jase has been accused of domestic violence in the past and GLOBE Magazine is all over this story with the latest details including crime scene photos.

Also in the June 9th print edition of GLOBE Magazine you can learn about the secret that Jerry Vale carried with him to the grave. What can it be.

Former Beatles member, Paul McCartney fighting for his life with and suffering a health crisis. GLOBE exposes all the details of Paul’s battle to live in this week’s edition.

For these stories and lots more make sure to read GLOBE’s June 9th issue. GLOBE gets right inside the Palace to report on what actually happens between the royals. I want to know what goes on between Prince Charles and Camilla Parker- Bowles and how that affects Kate Middleton and Prince William and Only GLOBE can provide that level of reporting accuracy. The second I’m done with my work today I’m sitting down with my copy for a good read!