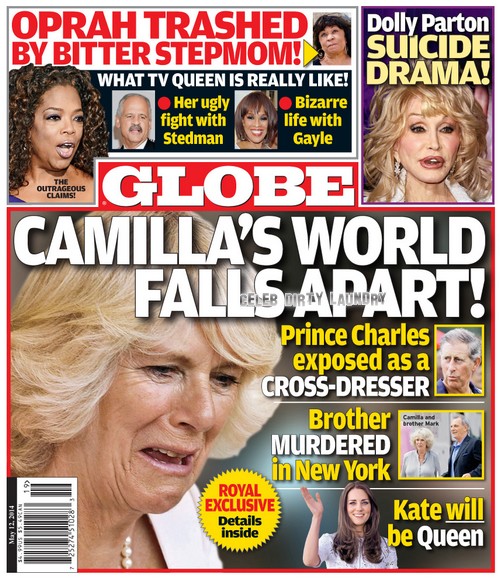 It has been a really rough month for Camilla Parker-Bowles. First she has had to suffer through all of the rave reviews that Kate Middleton has garnered while showing off her near perfect prince of a son while touring down under. Then Camilla got the news that all of her work to win over Queen Elizabeth had basically failed as she penned a letter to Kate while in Australia declaring her ready to step up and become Queen. Then Camilla’s brother was found dead on a NYC sidewalk after a night of heavy drinking over Easter celebrations. GLOBE suggests that Mark Shand might have been murdered!

According to the May 12th print edition of GLOBE Magazine Camilla has come to terms with the fact that all she really has to show for her embattled life at this point is her cross-dressing husband, Prince Charles. That, was one of his many secrets that The Duchess of Cornwall chose to keep to herself for decades but at this point she feels as though she has lost everything anyway so she has no interest in saving anyone else from embarrassment.

Also in the latest issue of GLOBE magazine Oprah Winfrey’s step-mother is dishing the dirt on what really happens behind the scenes in Oprah’s life. Things are certainly not perfect as she has had one hell of a blowout with longtime partner, Stedman while continuing to carry on that unique relationship with Gayle King.

The May 12th print edition also takes a close look at Dolly Parton’s recent suicide drama. She remains a longtime fan favorite and you can catch the latest news on her right here.

In the meantime, do you think Cami will go on the record eventually and drop a multitude of bombshells regarding the royal family? Between her drinking and frustration anything is possible. Luckily GLOBE has all the details on what goes on inside and outside the Palace walls! Each week GLOBE shares with readers insider information on the royal family – including facts that other news magazines are afraid to reveal or just don’t know. It is this type of reporting that keeps me as a loyal reader who enjoys hours each week with my copy of GLOBE.