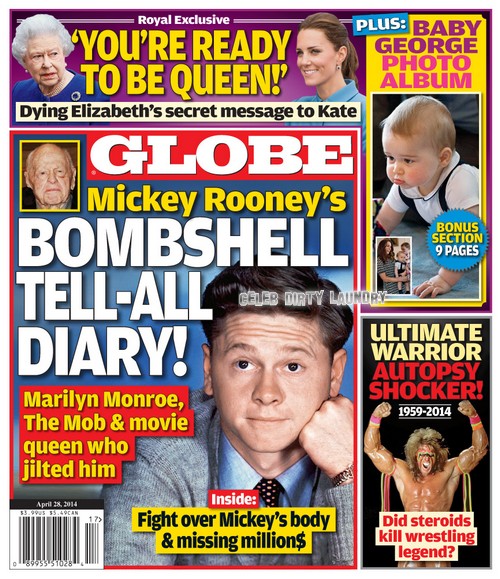 Kate Middleton sure has come a long way from her days of being good ole’ “waity Katey”, hasn’t she? She took some heat for being a commoner when she married Prince William but especially in the last year, she has completely proven that she does indeed deserve her position within the royal family. This month alone we have watched Kate, William and their baby son Prince George traveling to New Zealand and Australia and they have made it look easy. Kate has clearly gotten past her postpartum depression and appears to have really found her groove with motherhood and she seems to have a good tempered baby on her hands.

According to the April 28th print edition of GLOBE Magazine Queen Elizabeth has watched Kate’s metamorphosis very closely and believes that she is indeed ready to be the next Queen of England. Not only is Elizabeth mulling over the idea but she has apparently reached out and communicated it to her as well. Kate and William are the logical choice for who should take the throne next but the notion has been met with resistance because it is technically Prince Charles’ birthright. Even if he doesn’t care too much about fulfilling it, his drunken wife, Camilla Parker-Bowles fully intends to sit beside him on the throne, sooner rather than later.

GLOBE always dips into Hollywood’s breaking news in each and every issue. This week they have the inside details of Mickey Rooney’s explosive diary which has details on the ladies he loved and how he lost millions.

WWE’s Ultimate Warrior died last week of a heart attack, shocking fans worldwide and leaving wrestling fans to grieve together. Could steroids have played a part in his heart issues? It’s well known that anabolic steroids increase bad LDL cholesterol levels and blood pressure – both which lead to the formation of deadly blockages in the coronary arteries. Grab the April 28th print edition of GLOBE Magazine to read all of the latest details on the autopsy.

In the mean time, do you think will Kate be the next Queen of England? Will we see Prince William leap frog over Prince Charles as the next King? We know that GLOBE always has the inside track on the behind-the-scenes Palace intrigue and that’s one reason I never miss an issue. The time is approaching when Queen Elizabeth will be forced to abdicate and name her successor. I know GLOBE will be the first out with the Queen’s final decision on who will ascend the throne next.