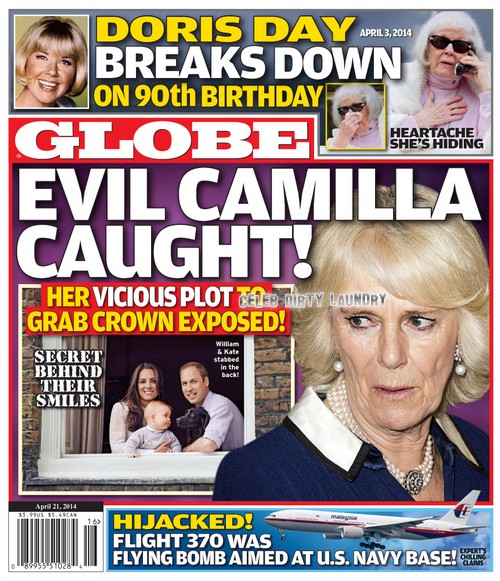 Every family has at least one member that is always trying to manipulate things and for the royal family Camilla Parker-Bowles really does fit the bill. She seems to want to sit on the throne a million more times than her husband Prince Charles does in spite of it actually being his birthright! She has spent the last 18 months working behind the scenes to completely unravel Kate Middleton in any way possible.

We have already told you that Queen Elizabeth really favors the idea of putting Prince William and Kate on the throne once she’s gone because they are well-liked by the British people and are also young enough to be somewhat relatable. Everyone in England isn’t loaded but many young couples’ are finding their way through parenthood for the first time and so in that way they are similar.

According to the April 21st print edition of GLOBE magazine Camilla’s plan to make a clear cut grab for the crown has come undone. We have seen her go to great lengths to discredit or even make fun of Kate in recent months. Anything that would make the Princess Kate look foolish has been fair game but it seems that as of right now, none of her information matters. The worse she tries to make Kate look the more impressed Queen Elizabeth seems to be with William’s wife.

Also in the April 21st print edition of GLOBE magazine you can catch up on the latest information on the search for Malaysian flight MH370. Some experts suggest that the flight was hijacked for a planned bombing of a US Navy base. Searchers have been desperate all week long to be able to triangulate that pinging noise that they have picked up on multiple occasions. If they can triangulate it then the thinking is that the point where all three sides intersect is where the plane is likely resting at the bottom of the Indian Ocean. As for what exactly happened to the plane it still officially remains a mystery. What do you think the real story is here? Did the captain or first officer purposely lead over 200 people to their deaths?

GLOBE reveals tragic news on iconic Hollywood Star Doris Day. It seems that poor Doris was distraught on her 90th birthday and broke down.  The classic star is hiding terrible heartache which GLOBE will reveal for its readers in this week’s print edition.

We’ve known Camilla to be a snake for decades ever since she destroyed Princess Diana’s marriage to Prince Charles in her shameless role as his married mistress. The Queen should never have accepted the vindictive hussy into the royal family. Now GLOBE exposes Camilla’s dastardly plan to steal the crown and further undermine Kate and Will. Leave it GLOBE to uncover the evil plot and explain all the shocking details to its faithful readers. I’m rushing out right after I post this to get my copy – I can’t wait to learn what Camilla’s done this time!