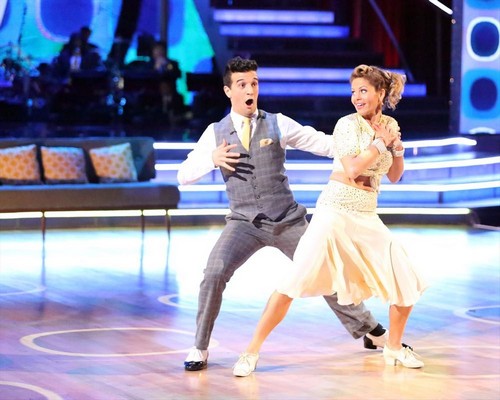 Actress, producer and author Candace Cameron Bure danced a Viennese Waltz to  If I Knew by Bruno Mars, on tonight’s season 18 episode 9 of Dancing with the Stars with Mark Ballas for their DWTS semi-final performance. Emmy Award winning director and choreographer Kenny Ortega makes his “Dancing With The Stars” debut as a guest judge on American Icons Night when he sits alongside Len Goodman, Bruno Tonioli and Carrie Ann Inaba  If you missed tonight’s show you can read a full and detailed recap, right here.

On last episode Candace performed a Foxtrot and Carrie-Ann loved it saying, : “First of  all I know you are in jeopardy you have been having trouble finding your footing.  Tonight I have seen a brand new flare and you are getting your footing.  You are back on track.”  They scored Cameron 36/40.

Candace Cameron Bure and professional dancer Mark Ballas: dancing a Jazz.  Amy has been getting ready for her dance tonight.  She tweeted, “Guess who? Getting jazzy for tonights show. @dancingabc #DWTS 8pm. We’re first up- don’t miss it!…”

Judges comments: Len: “Well tonight is all about pressure.  You have two new dances tonight.  The pressure got you a bit.  A few mistakes, but I understand. You are the first one out. I Understand.”  Kenny: “You are blowing me away week after week.  Your determination I have to give it to you.  I saw you surrendering yourself to the partnership.”  Bruno: “You started it very well.  If you go wrong cover it. Don’t show it on your face.  It is part of learning to perform.”  Carrie Ann: “We have all been there we have all messed up. But you continued on you trusted Mark and you surrendered to Mark and trusted him.”