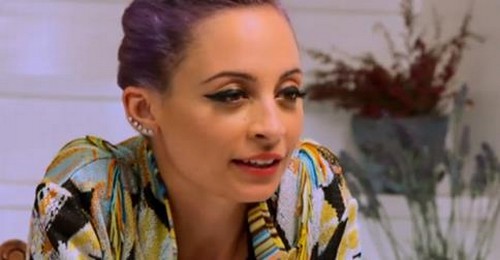 Tonight on VH1 Candidly Nicole airs with a new episode called, “How to Go Offline.” On tonight’s show Nicole wants to learn how to reconnect with her sibling, and attends her first support group.

On the last episode Nicole was the guest Editor at her friend Katherine Powers’ online fashion magazine WhoWhatWear. Nicole had a lesson in proper office etiquette when she’s assigned a working position. Did you watch the last episode? If you missed it we have a full and detailed recap, right here for you.

On tonight’s episode, Nicole feels like she’s been drifting away from her sibling, which encourages her to want to learn how to reconnect with her sibling, that she decides to attend her first support group.

The topic of tonight’s episode of Candidly Nicole is cell phones. It starts with her having a conversation with her half sister Sofia that is difficult because she is being ignored in favor of Sofia’s phone. Nicole is trying to discuss how her whole early life was built around 90210 storylines and Sofia is disinterested at best. Nicole then meets up with a group of friends and tries to talk to them about how phones prevent people from connecting- but they are all too distracted by their phones to really be present in the convo. Eventually Nicole makes them put their phones in the middle of the table and confiscates them.

NoMoPhobes are people addicted to their phones and they have support group meetings. Nicole goes to a group meeting and interacts with a guy about 90210. She has a real connection which makes the group leader happy.  The session ends with a group selfie. Nicole then sits down with friends to discuss 90210 and makes the point that kids today don’t miss anything because of their phones. They have no idea what it’s like to miss things.

Nicole decides to book her friends on a Beverly Hills 90Tour10. They seriously visit all of the landmarks featured on the show. They end up off the bus re-enacting old scenes between Brenda and Kelly. By the end of the trip even Sofia admits that it’s not so bad. Emily Balentine was a 90210 character played by Christine Elise and she just so happens to be doing a book signing. Of course the crew attends and Nicole gets touchy feely with Christine. Tune in next week for more of Candidly Nicole.