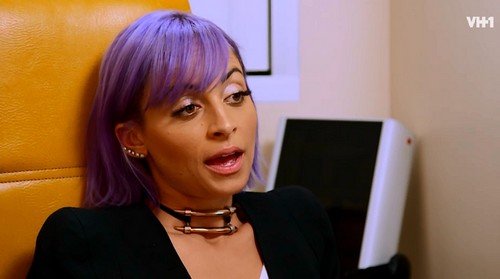 Tonight on VH1 Candidly Nicole airs with a new episode called, “How to Be Short.” On tonight’s show Nicole believes her height is impeding her ability to live a full life; Nicole considers a list.

On the last episode Nicole started to worry as she noticed what she believed that the other mothers were starting to treat her differently, she tried to find out what’s going on. Did you watch the last episode? If you missed it we have a full and detailed recap, right here for you.

On tonight’s episode, Nicole feels her short stature is preventing her from living a full life. After seeing her Podiatrist, Nicole goes through a list of ridiculous things she’ll never be able to do because of her height problems.

It’s time for #CandidlyNicole. At Soul Cycle, Ben and Nicole go to a spin class. She finds her feet don’t touch the pedals. She says being short has kept her out of runway modeling and politics. The Soul Crusher trainer leads the spin class. She still can’t reach and he comes to help her lower the seat. The class begins. The teacher offers her a high five she can’t reach. Ben tries to talk Nicole up and tells her to pretend she’s in the club with vodka and sparklers. She’s looking insanely rough and sweaty. Nicole’s foot is stuck in the pedal and everyone else has walked out. She curses.

She waddles into the changing room in pain and says it’s great. She says this isn’t good for her size. Ben says it’s a tiny bike. Ben says she’s confusing short with being unable to be athletic. She says when she was in sixth grade she went to the doctor and he told her she was done growing and she says her life flashed in front of her eyes, she had to be in a wheelchair and on bedrest for three days. Sad music plays.

Nicole says there is a whole world up there she’s missing out on. She says sun visors don’t work on her in the car, she can’t reach things at the grocery store. She says she has to eat kids cereal because it’s all she can reach. She says runway modeling is out. She says she always wanted to throw a first pitch at a Dodger’s game. Ben says he knows a guy. She asks if they can scoot it up but he says you have to throw from the mound and Ben tells her she sounds crazy.

Nicole goes to see Doctor of Sole about foot pain. She says walking hurts and he takes a look. He finds a pain spot and she meows and says that’s a cute way of saying it hurts. He tells her that her plantar fascii is the problem but she says she can’t give up heels but she can’t talk to people’s nipples anymore. She says being short is an emotional problem (sad music again) and she says she’s done therapy.

He says the heels are the problem and says he can give her support shoes. He offers some really said orthotic type ones. She hears laughter in her mind and tries them – there is velcro. She asks if the heels will kill her and he says it won’t go that far. She says she needs her heels to be taller. She says she has to wear heels like he has to be Asian. He says that’s not a choice and she says – exactly.

He tells her to make some changes. (more sad music) She agrees to stop wearing heels and won’t let anyone she loves wear them or even talk about them. He says that’s a little far. She says she wishes Man In the Mirror was playing right now and hugs her doctor who is freaked out.

Nicole says she’s going to train with Ben and Gabi to throw her Dodger’s pitch. She says she doesn’t have to fake her height anymore. We see she’s in flats but standing on a box. At the ballpark, they go to practice. Nicole has a hover round and Gabi is appalled and tells her it makes her shorter. Ben tells her she’s ridiculous and shouldn’t be rocking a rascal. She says she’s been injured and has no true acceptance. Ben tells her to give up on the short activism.

She says she’s never thrown a baseball before. Ben tells her to get out of the Rascal. She’s in the ugly orthopedic shoes. She trash talks her pretend teammates. Ben demonstrates how to throw. Ben goes to catch for her. She throws a few and they are all bad. She’s getting nowhere near the plate. She complains it’s hurting her arms. Finally she gets one close to the plate so they have to take a selfie. She tags it #shortpeopleproblems.

Nicole says she’s throwing the first pitch at the Dodger’s game and wonders if she’ll get scouted. She and Ben head over to the game. She says she’s doing it for all the short people around the world. He asks if she’s retired the Rascal and she says she’ll let her body decide. She asks if they can go in the locker room like on Sex and the City. He says she doesn’t want to see that and she asks if they’re all limp and sweaty.

She says you don’t get dirt on your junk when you play and Ben is uncomfortable and tells her to focus on the pitch. She says she just has to try and get it to the plate but then says she’s getting nervous. She worries about the jumbotron. They pull up and she hops out in her orthos. She asks where the hell they are and she realizes he’s brought her to a little league game in Santa Monica.

Ben tells her it’s a Dodger’s game. She says it was like real Dodgers and he says she thought she would be at home with people more her size. He admits he thought he had an in, but didn’t. He says at least she can look them in the eyes and she says she doesn’t want to let the little assholes down. She asks if they were cups and Ben says little tiny ones.

Nicole is announced and Ben tells her she’s the tallest one out there and says to have fun. She tells the players that this is for all the shorties and spits. The kids tell her that’s messed up. She does her pitch and makes it to the catcher (barely). The crowd goes wild. She says – let’s play ball. Ben gives her thumbs up. She’s dancing on the pitcher’s mound and then lurks there as the game starts.

Everyone stares at her while she coaches the pitcher. He asks why she’s still out there. She heads to the other players for high fives and lurks around. She gets in the way and runs for a ball. She calls for a huddle and says she wants to see murder in their eyes. She says no actual murder, but murder their souls. She asks if the kids have seen Indecent Proposal. She tells the kids smell you later and goes.

Nicole talks to people about height. She talks to a really tall girl then a short one about being a runway model. She asks the tall girl how old she was when she hit 5’1”.