Cara Delevingne Slept Through Vogue Interview And Then Complained About It – Entitled And Rude! 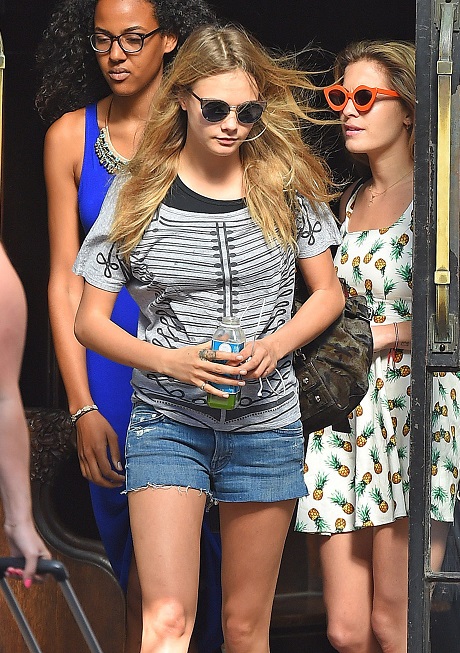 Cara Delevingne has somehow managed to make it to the top of the A-list without doing much of anything. But I’m guessing that professionalism is not her strong suit, considering her current feud with Vogue Magazine. I mean, it’s VOGUE Magazine. Sure, the brand took a huge dip after putting freaking Kimye on the cover, but you think that Cara would be on time and engaged for a Vogue interview, right? Nope.

According to the Vogue write-up, Cara missed her meeting with the interviewer by thirty minutes because she ‘overslept’ [a.k.a. she was hungover]. And, if that’s not bad enough, she then fell asleep during a massage in the midst of the interview and was passed out for hours.

At the risk of repeating myself, this is VOGUE Magazine. Honestly, I’m surprised the writer had anything good to say about Cara at all, but they managed to turn it into an interesting character analysis piece about Cara’s partying. In fact, the writer just makes it sound like Cara has a sleeping problem, even though she fully references the fact that Cara was out partying with Lily Allen until 5 A.M. the previous night.

But, of course, most celebrities absolutely cannot handle criticism, and Cara’s no different. She went on Twitter after the Vogue article came out, and she raved and ranted about how she was misrepresented in the article. She wrote, “Why do people in the industry lie so much???? They would rather see you fail than succeed. What happened to supporting each other. It’s even worse when your trying to fight people that have all the power because then you are powerless. All I can say is that I work extremely hard and ‘sleeping’ is proof that sometimes I work too hard. I apologise for being so ambitious….”

Wow. So Cara is claiming that she, the budding actress and model, has less power than a magazine. Is that why she had the ability to be thirty minutes late without getting fired? Whereas if the writer had been thirty minutes late, Cara would have surely complained to the magazine. The ego of these people, I swear. Also, I wouldn’t consider partying until the wee hours of the morning to be working ‘extremely hard’.

In addition to that, Vogue consistently writes kiss-assy pieces on celebrities all the time. So if Cara wasn’t the subject of an extremely flattering interview, it’s not because Vogue wants to see her ‘fail’, but because her behavior didn’t warrant it.