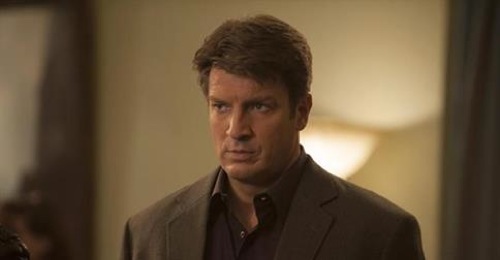 Tonight on ABC CASTLE starring Nathan Fillion continues with an all new Monday October 13, season 7 episode 3 called “Clear & Present Danger”. In tonight’s episode, a pool shark’s death is investigated, and evidence suggests the killer may possess supernatural abilities. Meanwhile, Castle and Beckett try to resume their ordinary lives and move on from his disappearance.

On the last episode, while the team investigated the murder of a toy company CEO, Castle uncovered a lead to his mysterious disappearance, launching him into a dangerous investigation of his own. Did you watch last episode? If you missed it we have a full and detailed recap, right here for you.

On tonight’s episode, when a pool shark is murdered by an unseen force, Castle and Becket uncover evidence that the killer may have paranormal powers. Meanwhile, Castle and Beckett attempt to get their lives back to normal following his disappearance

Tonight’s episode is going to be great so be sure to tune in for CASTLE on ABC at 10PM EST. We’ll be blogging all the action, be sure to hit up the comments and tell us what you think of this new season.

Loud music plays and a rocker dude shoots pool and drinks. There’s a knock at the door. He opens it to an empty hallway. He looks back inside his house then back to the hall. He yells no, then runs. Castle and Kate sit looking at their tablets and she asks if he wants to do something tonight. She asks about a movie and he says if she wants too. Then she suggests maybe they could try something else tonight. He asks if she means… you know… and he says he thought she wasn’t ready and she says the same. He says he’s so ready and she says she is too. Just as they’re about to pounce on each other she gets a work call.

Kate promises Castle when they get back home, she’ll slip into his little Valentine’s day gift. Their perp has a pool cue through his chest. William Fairwick was 25 and the neighbors downstairs heard a struggle a little before eight. Castle shows her that damage runs left to right indicating a left handed assailant. The doors and windows were locked. Javi found 20k of cash in a drawer. A guy rushes in, Henry, a neighbor, and asks what happened to Will.

Kate asks if they head anything but he was playing an RPG online and had headphones on. Castle knows the game and asks if he’s a goblin. Henry admits he’s the goblin king and Castle gives him a fist bump. He says he and Will pretty much only talked about gaming. He tells them he was a pool hustler by night and an insurance adjuster by day and hustling was how he made his real money.

They go to the pool hall and the owner says that Will mostly hustled Wall Street guys that wouldn’t kill over a bit. He says Will mostly worked upscale clubs but went to a seedier place recently called O’Neills. He says what people say and what they do are two different things. Kate asks him to explain. He says he asked Will once how he got so good and the guy told him he made a deal with the devil.

He says Will looked nervous the other night and he asked him what was going on. He says Will told him his time was up and he was about to lose his soul. Castle is intrigued. Kate is skeptical. She gets a text and says Javi has something for them at the precinct. They head back. Kevin says his place of work is closed til tomorrow and she asks him to check at the bar on his way home.

Javi and Ellis show them security footage from the hall of Will’s building. It shows Will running and screaming and then the door opens and closes on its own but no one walks in or out. Kate says it’s impossible and Castle asks to see it again. He says the killer is right there. He says it was the devil that came to collect his due.

Kate mocks Castle about the devil killing someone with a cue. Castle says you live by the cue and die by the cue. Kate says Will left a window open and a gust of window shut it. He reminds her that Javi said the windows were closed and locked. She offers other theories but he insists it’s the devil. She says the devil is in the details. He says he wants to uncover her back at home, not clues.

Her phone rings and he tells her not to pick it up. She does and it’s Lanie. They head down and she shows them multiple stress fractures on the left wrist. Kate asks if she’s saying that he destroyed his own apartment. Castle says it’s because he was fighting off invisible evil. Ryan comes in with info and says trouble could have followed Will home from O’Neills pool hall.

He shows them a photo of an ex-con, Jiggy Michaels, who he got in a serious altercation with. He hustled Jiggy out of 20k and the guy threatened to kill him. Jiggy is known for his B&E skills and is known as the Ghost. Kate tells Castle that makes perfect sense. Jiggy asks for a lawyer and Ryan and Javi says he may want to explain to them first about killing Will.

Javi says they have a cabbie dropping him off nearby. Jiggy says his boyfriend lived near there and says Will didn’t hustle him, he cheated him. He says he cleared the table with one ball. He says he was mad but Will offered him the 20k back in exchange for some knowledge. He says he wanted him to give him tips on how to break into a brownstone that had a ton of security.

They ask for the address of the brownstone. Kate says the place is owned by Tom Talmadge, founder of Hitch, the car service that has giant thumbs on the roof. Tom’s place was broken into and he was assaulted but he refused to provide a description of his assailant. They go talk to him and he says he doesn’t want to make a statement.

They ask him about Will and he says he doesn’t know him. They show the photo and he obviously recognizes him but won’t say how. He’s still in the hospital so he couldn’t have killed the guy. He says this may sound crazy and says he came home early and got a beer but felt like he was being watched. He says something threw him to the ground – some force he could feel on top of him but says nothing was there.

He says when he came to, Will was there screaming – stop it, you’re killing him, that wasn’t the deal. He says he thinks Will saved his life. Castle asks what the force wanted and Tom says he thinks it just wanted him. Kate and Castle study the murder board and she finally admits it’s weird but says it’s not the devil. Castle says he thinks it was likely just an evil minion.

Kate says she’s going to look at the security footage again. She asks the evidence cop where the DVD is. She says put it in there and asks who has been in there. The cop says no one has been there since she brought the box back. Castle says clearly the killer isn’t the devil, but the invisible man. The evidence cop and Kate both look at him like he’s insane.

Kate called Will’s place to get copies of the security footage but it’s all been wiped and the manager says no one has been there. Castle says this all makes sense – that it’s the invisible man. She asks Javi what else he found out about Will. Javi says Will had a lot of heavy encryption on his laptop. They also got his wireless record and there’s a new number that started six weeks ago.

He was talking daily to a marine biology professor – Donna Brooks. Kate asks how she knew Will and she says there were dating again now but dated back at MIT when they were in college. She says he was the smartest guy in their class but dropped out after a semester. She says they talked about him getting back to finish his degree.

Castle knocks on the glass of an aquarium in her office and Donna says cuttle fish don’t like it and tells him to stop. She says Will started acting paranoid last week and thought he was being watched by “them.” She says she told him to get help and says it sounded like MIT all over again. She says he left MIT after a nervous breakdown but says maybe, since he’s dead, he was being followed.

Kate theorizes that Will may have destroyed his own apartment and stabbed himself. Ryan says Will works remotely for the insurance office. Henry, the neighbor, says he saw him leave for work everyday. He had a key card that was scratched up like it had been used so they head to his apartment to get it. Kate finds the lanyard with the keycard but then something snatches it from her. She’s being choked.

The coffee table smashes and Castle is being beat up by forces unseen. The door slams and the force is gone. Castle says the invisible man is real. Kate says whatever it was, it ran out with their only lead. Castle says he swapped his credit card for the key card and still has it. They wonder if it’s still in the room with them and she pulls her gun as they look around nervously.