Castle Detailed Recap: Season 7 Episode 7 “Upon a Time in the West” 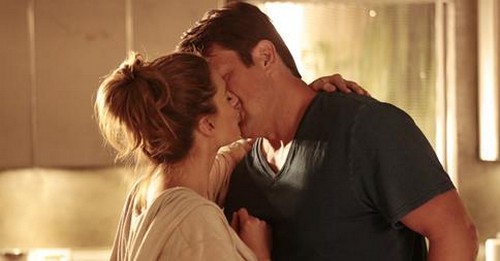 Tonight on ABC Castle starring Nathan Fillion continues with an all new Monday November 17, season 7 episode 7 called “Once Upon a Time in the West”.  In tonight’s episode, Castle and Beckett [Stana Katic] pose as newlyweds at an Old West resort to investigate a possible poisoning homicide.

On the last episode, a murder investigation launched Castle into what seemed to be an alternate universe where he never met Kate Beckett. Castle had to convince Beckett, Esposito and Ryan — now complete strangers — to let him participate in their investigation so he could find his way back to his own world. This inspired Castle & Beckett to finally take a trip to the altar. Did you watch the last episode? If you missed it, we have a full and detailed recap right here for you.

On tonight’s episode as per the ABC synopsis, “when Castle and Beckett learn that a murder victim may have been poisoned at an Old West-style resort, they visit the resort posing as newlyweds to uncover the truth.”

Tonight’s episode is going to be great so be sure to tune in for CASTLE on ABC at 10PM EST. We’ll be blogging all the action, be sure to hit up the comments and tell us what you think of this new season.

Tonight’s episode of Castle kicks off with a patient named Whitney arriving at the emergency room, the paramedics reveal that she went in to convulsions on the train but there was no sign of drug use.  But, apparently she kept telling the paramedics that someone did it to her.

Castle and Beckett gather their friends around for drinks and announce that they got married.  Lanie and Javier are not happy that they weren’t included in the wedding.  Kate receives a phone call and says they have to cut the party short because there was a murder.

Kate and Castle arrive at the morgue where Whitney Williams’ dead body has been sent.  The coroner says that she was poisoned and the right before she went in to cardiac arrest she muttered the word “Diamond Back.”  The coroner hands over her case of emergency card – which says to contact

Phillip and Lenanne Dagmar.  Javier meets with the Dagmars, they reveal that Whitney’s mother died and Whitney was one of their “Dagmar scholars,” they sponsor disadvantaged youth.  They reveal that they hadn’t seen her in a week, but the last time they seen her she said she was taking time off from her internship because she was still upset over her mother’s death.  They have never heard of “Diamond Back.”

Javier searches her computer and finds an email saying that she had booked a stay at a ranch in Arizona called Diamond Back.  They check her flights and realize that she was actually poisoned in Arizona and just flew back today.  They realize that on the train she must have had her luggage with her, and either someone took it or the paramedics left it on the train.

Kate videochats with the sheriff in Arizona.  He tells her that Diamond Back Ranch is the cornerstone of his community and breathes tourism money into their economy.  He refuses to investigate the ranch until they have solid proof.  Castle thinks they should go undercover as tourists and have their honeymoon at the dude ranch.  Kate thinks he is nuts, but he reminds her this is the only way to find Whitney’s killer, Kate finally caves.

Kate and Castle arrive at the ranch and meet the proprietor James, he boasts about how romantic and authentic the ranch is and gives them brochures, he says the ranch hands will guide them on any adventure they desire.  He offers to put them up in the honeymooners’ suite – but Kate says she wants to stay in bunkhouse 14, the same room that Whitney was in.  James gets them dressed in western costumes and shows them his handgun twirling, he tells them they can get their own guns at the gift shop.

Kate and Castle get their room key and realize that the key that Whitney had in her purse wasn’t a room key, it must belong to one of the other doors at the ranch.  Kate begins searching the room looking for clues.  They find a gay cowboy named Tobias in the bathroom, and he reveals that he shared the bathroom with Whitney.  They sit down with Tobias for coffee and he dishes on Whitney, he says that she was hooking up with one of the married ranch hands – but Tobias didn’t know which ranch hand it was.  He says that the last night Whitney was there she came home at 3:00 AM crying and packed her bags and left.  They realize that Whitney was poisoned while she was out with the married ranch hand.

Kate receives a phone call from Javier and Ryan, they have news on Whitney.  They checked the subway videos and realize that the paramedics left her bags on the train, but a homeless man stole them.  They are trying to track him down.  Also, the coroner found a strange wax covered cardboard underneath Whitney’s nails.  They interviewed Whitney’s friends and they reported that she had been spending a lot of time at the Historical Society before she went to Arizona.

Castle heads to the saloon and meets a ranch hand named Ollie and learns that he was the one having an affair with Whitney.  Ollie insists that Whitney came on to him and got all handsy, but they never hooked up.  Ollie says that he thinks that Whitney was just flirting with him to steal his ranch key to the shed.  Castle and Kate head to the shed that Whitney broke in to, and realize that she was stealing dynamite because it comes in a wax covered box.

Javier and Ryan call Kate and tells her that the reason Whitney was at the Historical Society was because she was investigating a place called the Yapavai Reservation in Arizona near the ranch.  Kate and Castle head to the reservation and Castle insists on taking a horse and buggy and surprises her with a wedding gift – matching guns.  They arrive at the reservation, and the chief reveals that he met Whitney and she wanted him to translate a Yavapai word for river.  He says he told her the meaning and she was happy and left.  Kate and Castle are baffled and head back to the ranch, they decide to pull over and set up a campfire under the stars.  They start getting undressed, and a rattle snake crashes their party.  Kate shoots at the rattle snake and the gun shot spooks the horses and they run off, leaving them stranded.

Kate and Castle arrive at the ranch the next morning after walking all night.  James greets them and says he was worried, their horses came back hours ago.  Meanwhile back at the police station, Javier and Ryan have found Whitney’s luggage.  They found a mysterious letter claiming that a man named Clyde and Dutch minutes away from discovering the secret of the “Peacock Boys.”  The letter was sent to a woman named Rebecca in New Jersey, and they are trying to track her down.

Kate and Castle head to the saloon where the bartender fills them in on the Peacock Brothers.  They were bank robbers in the 1800’s and they made off with over 50 bars of US Gold.  They were gunned down two days later but the gold was never located.  They realize that Whitney came to the Diamond Back to find the gold – but they still have no idea who killed her.
Javier tracks down the woman named Rebecca from New Jersey, she explains that the woman that the letter was for was actually named Virginia, and it she was Whitney’s mom and Clyde was her dad.  But, Rebecca hasn’t heard from Clyde in over twenty years, she doesn’t even know if he is still alive.

Castle and Kate take Whitney’s maps and head out in the desert to try and find the gold to see if there are any clues about who killed her.  They find where Whitney set off the dynamite and head in to a hole in the ground.  They find a huge trunk and Castle is certain that it is full of gold, but when he opens it all he finds is a skeleton.  They realize that the body in the trunk is Clyde’s and the bloody shirt with a name tag with the initials “PD.”  As in Philip Dagmar.  They do some research and realize that Phillip Dagmar used to work at the ranch with Clyde, and went by the name of Dutch.

Back home Javier and Ryan bring Philip Dagmar, AKA Dutch in for questioning.  He insists that he didn’t kill Clyde, he fell and hit his head on a rock when they were digging up the gold.  He says there was a third partner, and he took 25 bars of gold, his name was James.  Philip says that James is the one who poisoned Whitney to keep her quiet.

Ryan calls Castle to give him a heads up and tell him that James is the killer, and James is sitting right next to him at the bar.  He takes Castle’s phone from him and throws it on the floor and smashes it.  Castle and James are about to have a good old-fashioned shoot-out, but Castle intercepts them and shoots the gun out of James’s hand.  The real town sheriff arrives and takes James in to custody.  Castle and Kate pack their bags and say their good-byes.  Castle is getting ready to leave and Kate announces that Javier and Ryan decided to pool their vacation days together and give them to her as a wedding gift so they can stay at the ranch for two more days.