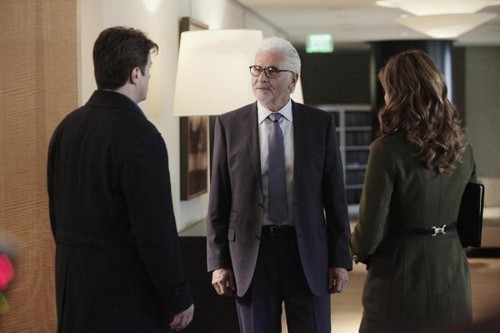 Tonight on ABC their hit crime drama CASTLE returns with a new episode called “Deep Cover.”  On tonight’s show the murder of a hacker reunites Castle with his mysterious father.  Did you watch the last week’s season 6 episode 11? We did and if you want to get caught up, we have a full and detailed recap, right here for you.

On last week’s episode when Castle and Beckett discovered that the victim of a building fire was actually shot to death, they got on the trail of a serial arsonist turned murderer.  Meanwhile, Ryan’s wife, Jenny, went into labor, but disaster threatened to ruin the joyous moment.

On tonight’s show the murder of a young video store clerk takes a strange turn when the team discovers his past history as a high-level hacker. But it’s nothing compared to the shock Castle receives when their investigation leads them straight to his father, Jackson Hunt (guest star James Brolin).

RECAP: Castle and Kate are talking about their wedding and what would happened if it would rain; they think they will do a winter wedding but want to do it outside. They decide to instead do it in Spring, but the think about summer; Kate then says she wants September. Martha tells them there is never a good time.

Castle and Becket are at the scene of a murder and are told he was sitting in the shower; but they found that he has tiny red specks on his elbows and knees thinking he must have fell on them. Both his shoelaces are tied differently, on the floor one of the boards are pulled up and a secret compartment is found with a laptop.

Esposito calls down some of the victims family; both him and Becket question them and ask why they had a laptop under his floor. They are told that the victim was a computer wiz and stole over 4 million dollars; he was caught and was not permitted to use anything with the internet.

Esposito isn’t sure if the stolen identities would have the kid killed; the victim apparently went on a sever that was about banking solutions. The victim Ted last used it. Becket and Castle go to see Anderson Cross who owns this banking solutions; Castle gets a call and is told not to react because lives are on the line. Cross introduces himself; both Castle and Becket introduce themselves.

There was a coin mark on Ted’s foot, Castle is very out of it being distracted from the call he got before. The coin is apparently an Iranian rial; Becket is surprised that Castle isn’t talking at all. In Ted’s stomach there was funnel cake and clams; Castle believes he was at an amusement park and it was Coney Island.

Castle makes an excuse to leave and Becket goes to an amusement park where Ted was apparently killed; Becket thinks that the murderer tried to hide the whole murder. Castle is in a park and sits behind Cross; he asks about Ted and what he learned. Castle tells him that he was murdered at the amusement park with an Iranian rial; Cross tell him that even though he is his father to shut his mouth about it to everyone.

Castle arrive to see Becket and Esposito calls him them over; they see a guy on the camera and realize it is Anderson Cross.

Castle says that Cross doesn’t seem the type to kill a person; there is no proof he killed Ted. Becket tells Esposito to get everything on his company; all the company has been erased and it doesn’t exist no more.

Esposito tells Castle that nobody knows Cross and that he just completely left; they believe that Cross might have been a previous killed and a former CIA agent who broke out of prison and killed three guards. Becket tells Esposito to find whatever they can on the guy; Castle says he is leaving and tells Becket to not follow.

Castle goes to the benches but Cross never shows up; Esposito and Ryan find a lead so the both go out to check on it. Martha offers to give Castle some juiced stuff; Castle says that he was used by his father to get information on leads against him.

Martha goes to get the door and Cross is there; Castle gets up and he says to Castle he got shot.

Martha is taking care of Cross’s wound; Castle cuts open the wound and goes to pull the slug out of the wounded completely messes up but gets it on the second try. Cross goes ahead and starts to stitch himself. Castle brings Becket into the room and tells her that Cross is his father, Martha says she wishes it wans’t what it looks like but it is. Becket says that she is going to arrest Cross; but he tells her she will get no questions and that he wants Ted’s killer.

Cross says that he hired Ted to help him find Gemini; but Gemini got to Ted first and killed him. But the Iranian coin says it is a message that he trailed Ted and was grouped up on by Iranian’s and shot at; Becket doesn’t believe him. Becket turns on the news and there is a complete report about the whole inciden. Esposito says that Ted was in the place shot up and was hacking; the hard drive was stolen though from the crime scene and Cross has it.

Cross looks at an email about a payment received and that a whole deal is going down in 30 minutes; Cross says he is going because the list can’t go out in the open. Becket offers that Castle and her will go and stop it.

Castle goes to a library and is on a laptop waiting to download a file before the Iranians; Cross talks about the past with Martha but almost goes down because of the pain. Cross says his blood sugar is low and needs juice, Castle says they might have missed it but Becket says they might have been played. Castle sees what he has to log into come up and Becket is trying to find what they need; Martha brings the juice to Cross but doesn’t see him in the bed.

Castle says that Gemini is above them, Becket runs up trying to find what they need; she is close and Becket has less than a minute. Becket is super close and found a relay system; Castle says that they downloaded a phonebook. A man comes up to him and asks for Castle’s autograph, he tells him that he has to come with him and Gemini was a homeless man from the park Castle gave money to before.

Gemini takes Castle downstairs and asks who the man he met with in the park was; Castle says that the man probably sent him since he was expendable. Castle says he will be killed either way so it doens’t matter; Gemini hears a sound and Cross comes and stabs him with a knife.Cross went ahead and shoot Gemini in the head; Cross had a GPS in Castle’s pocket so that he could go and fine Castle when the time came. Cross says there are reasons he does what he does and that he will understand one day; Castle goes and finds Becket. Castle and Becket go downstairs and Cross is gone with Gemini’s body.

Castle questions if his dad is his family and tells Becket that she is his family; he wants to get married in September and says screw his book tour.