BY Annemarie LeBlanc on January 6, 2014 | Comments: one comment
Related : Castle 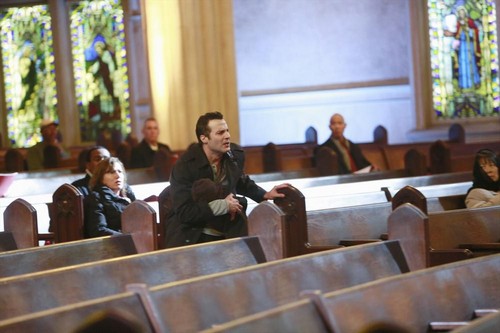 Tonight on ABC their hit crime drama CASTLE returns with a new episode called “Under Fire.”  On tonight’s show Castle and Beckett hunt down a serial arsonist, while Jenny goes into labor.  Did you watch the last week’s season 6 episode 7? We did and if you want to get caught up, we have a full and detailed recap, right here for you.

On last week’s episode a bleeding man stumbled into a church, but just before dying, he handed a mysterious bundle to the priest. When the bundle turned out to be a smiling baby boy, Castle and Beckett found themselves accidental nannies to the newborn. But when they determined the baby and the victim were not related, they discovered that finding his rightful parents may be just as hard as solving the murder.

On tonight’s episode when Castle and Beckett discover that the victim of a building fire was actually shot to death, they get on the trail of a serial arsonist turned murderer. Meanwhile, Ryan’s wife, Jenny, goes into labor, but disaster threatens to ruin the joyous moment.

RECAP: We see Becket speaking to Jenny who is asking about Kevin and Becket tells her there is a problem; then we flash back to twelve hours earlier where Becket, Castle and Kevin are going through a building that went on fire. There is a victim who is burned to a crisp, it is a man and there is a bullet shot. It looks like the killer set the fire to mask the murder. The building starts making some noise and Castle makes a run for it.

Castle and Becket interview Mr. Torrino who left the building abandoned after cash flow problems. Becket asks him if he is part of the mob; he says no, he is out of that life and had dreams of renovating the building. Mr. Torrino’s alibi works out.

Lanie tells Becket that the victim had a splint in his leg; just then the fire investigator walks in and she says she knows the victim, he was her partner, Blake McCann who was also a fire investigator. Dental records confirm the victim is Blake. Castle now needs to know if anyone wanted to hurt Blake. There was a mark left at the scene of the crime, it appears that this could be the crime of a serial arsonist. Castle wants case files about the serial arsonist. Blake does not have any enemies, it appears that the “phantom” arsonist choose this building.

Kevin heads over to Blake’s house and it is ransacked, it appears that someone else was interested in Blake as well. They have found a lead, Adam Ferguson who is a known arsonist that Blake tried to put away many times. They interview Adam and he says he had nothing to do with it, it was the phantom and Blake told him about it. Adam says that he gave Blake some tips that he paid for. Furthermore, he suggests that the phantom has to hear the fire, see his work; every fire he sets, he is there watching.

Kevin and Esposito are searching an abandoned building on Becket’s suggestion and Kevin notices there is a brand new lock; they brake it and find what looks like an arsonists workshop. An alarm starts to go off and the two run as fast as they can to get out of the building before it explodes.

Castle is watching a video surveillance of the fire, or so he thought. Becket tells him that it is in fact someone who filmed the fire; nobody is calling “fire”. The video showed up on the internet and it came from a guy named Milo Pavlick who loaded up on his website.

Becket and Castle find out that there is a fire in the abandoned building that Esposito and Kevin went to, they rush to it. Castle and Becket don’t know if Esposito and Kevin are alive; but they are and trying to get out. Jenny has arrived on the scene of the fire. Meanwhile, inside the building Kevin is trying to convince Esposito to save himself and leave because he cannot due to his legs being trapped under a beam.

Becket is upset, the fire department is changing the mission because the building is too dangerous. Becket tells Jenny to leave; she is in labor and it is not safe for her to be there. Esposito and Kevin get near a phone and call Becket; they give them there ETA, but it is unmapped portion of the building.

Gates go to see Milo to try and get more info form him again to hopefully find the arsonist. Kevin is on the phone with Becket, he wants to speak to Jenny because he doesn’t think he is going to make it out alive. They talk, but it doesn’t take long for Kevin to drop the line, Jenny is in labour.

The fire crew work very hard and finally find the location where Esposito and Kevin are stuck and get them out; Kevin goes right to Jenny and finds out that he has a baby.