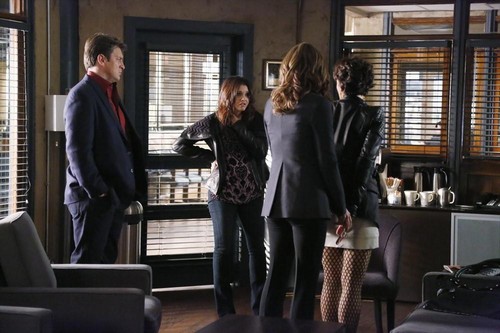 Tonight on ABC their hit crime drama CASTLE returns with a new episode called “Deep Cover.”  On tonight’s show Castle & Beckett investigate the murder of a young pop diva.  Did you watch the last week’s season 6 episode 11? We did and if you want to get caught up, we have a full and detailed recap, right here for you.

On last week’s episode the murder of a young video store clerk took a strange turn when the team discovered his past history as a high-level hacker. But it was nothing compared to the shock Castle received when their investigation led them straight to his father, Jackson Hunt (guest star James Brolin).

On tonight’s show when a rising young pop star is found dead in an alley, Castle and Beckett delve into the victim’s out-of-control hard-partying lifestyle, but as they dig deeper, a shocking revelation threatens to rock their investigation.  Alexandra Chando (“The Lying Game,” “As the World Turns”) guest stars in the episode.  Guest Cast: Alexandra Chando as Mandy Sutton, Lola Glaudini as Marilyn Sutton, Myko Olivier as Pi.

RECAP: In the paper it is rumored that Castle is seeing his ex-wife again and Beckett asks him about it; Castle says it was only business and it meant nothing which has let it off the hook. Castle gets a call on the phone about a murder of a celebrity named Mandy.

Castle and Beckett questions some of Mandy’s friends and they are told that she was being clean since she was going to rehab and met a guy there; the girl got drunk at a party and made out with an ex of hers and her boyfriend left her. The boyfriend was questioned and mentions that her old boyfriend got Mandy into drugs and even once threatened to kill her; Beckett questions this ex boyfriend about everything and he says that he was in Queens. Beckett gets a call and the mother of Mandy at the morgue says that the corpse isn’t her daughter.

The woman is Claire and a deco for Mandy to distract the horde of paparazzi that would go after Mandy, nobody has seen Mandy and she hasn’t answered her phone. Mandy checked into a hotel but Mandy never answered the knocks on the door and the phone; they find Mandy drunk on the floor. Mandy is told Claire is dead;Castle and Beckett question Mandy but she seems very uninterested. Beckett asks if she had any fights or upset anyone in the past days, Mandy says probably but she is hung over; they tell her to stay out of sight and pretend she is dead. Beckett is given a letter that says they don’t like what they see of Mandy and have pictures of her in her bedroom sleeping.

Castle is helping Mandy hanging low and sees Alexis who asks him about the letter of recommendations for Pi; Alexis talks about Mandy and insults her so Mandy reveals she is still alive and Castle explains. Beckett says is given the pictures of Mandy and is given the bane if the guy who stalks Mandy; they raid his house and find him in a closet hiding.

The man they caught says to Beckett that he was taking care of her and protecting her; he says that he sent the pictures that he cared for her and wanted to let her know he was watching. The guy knew that the girl that came out wasn’t Mandy, but he noticed that in the back Mandy did not come in; he mentions seeing a motorcycle that went into the alley at the back and he went in and out in 3 minutes. The bike was red and had flame decals on the body; Beckett says he is a nut job but he knew that can tell Claire and Mandy apart. Alexis accidentally took Mandy’s phone and gets a call from her; Mandy tells her to bring the phone to her hotel room. Pi says that he has to go up town and says goodbye; Mandy lets Alexis in and take her phone back. Alexis apologizes about calling her a hot mess. Mandy says that it happens out of nowhere; you just become someone you don’t in her business.

Beckett says to Castle that they found the bike of what could be their murderer; they caught the murderer who they believe might just be Jesse who was Mandy’s ex. Alexis talks to Mandy all about her problems; but Mandy gets a text on her phone and it’s her friend Sam saying that he knows she isn’t dead. Mandy calls Sam but he doesn’t answer, she decides to go out and Alexis offers to go with her.

Beckett is informed that Mandy left the hotel and is starting a search party; Mandy and Alexis are at the club. Alexis calls after Sam and asks for a drink, she also mentions that Mandy is there; they go to talk to him in private. Sam says he was glad to see her, he saw Claire at the bar last night before she died; Sam says he thought she was a crazy fan and told her nothing. Claire apparently talked to Jesse instead and ended up getting killed, Mandy decides to call Jesse; Mandy is found out by fans and they start taking pictures of her saying she is alive. Beckett sees on the news that Mandy is reported to be alive, Jesse gets a call from Mandy and is on his way to her; Castle sees on the news that Alexis is with Mandy. Mandy and Alexis make a run for it, Jesse pulls up and he tells Mandy to get in with a gun pointed at the two of them.

Jesse says he wants answers and knows that someone is messing with him and that Mandy is involved, Mandy says she made a mistake and says that the other night it was Claire in his picture with him; Alexis believes Mandy could have been drugged and wont find out. Jesse says he is being pinned as the murderer, he went to go so Claire to talk her out of telling Mandy what she did; but when he got there she was dad. The police arrive and Jesse is told to stand down, Castle runs over and hugs Alexis; there is proof that Jesse’s story is solid. Ryan and Esposito talk to a paparazzi about the picture he took, they ask him who is his source and they figured out that the a man named Harvey planned it all to bring popularity to his blog.

Beckett has Harvey in interrogation and he is denying everything that went down; Harvey said he was tipped off about the scene at the club. They have found the location of the person on a burner phone, they made a mistake on not throwing the phone away; the murderer is Mandy’s mom. Mandy’s mom says that her boyfriend Zac was ruining her life; Mandy says he was the best thing to happen to her. Mandy’s mom says he was taking her away from being a celebrity; Mandy’s mom confesses to having killed Claire. Beckett arests Mandy’s mom as she tells Mandy she did it for her; Mandy says that she only did it for herself. Castle tells Mandy to not run from all this, Mandy tells Castle to thank Alexis; Alexis brought Mandy’s ex Zac for a little reunion to help her out.