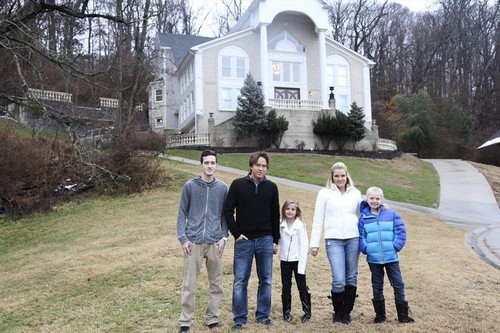 On the last episode of CWS, Supermodel and actress Angie Everhart who lives in Los Angeles, CA with her boyfriend of two years, Carl, and her son Kayden (4) and Carl’s daughter Joann (7), switched lives with Food Network Star Pat Neely. Pat  and Gina Neely live in Memphis, TN, they have been married almost 20 years and star in “Down Home with the Neelys.” Pat & Gina’s daughter, Shelby (19), was away at college and Gina’s daughter Spenser (25) was living back at home, saving money for an apartment of her own.  Did you watch last week’s episode?  If you missed it we have a full and detailed recap, right here for you.

On tonight’s episode, Larry Birkhead is the former boyfriend of Anna Nicole Smith and became a familiar face in the tabloids during a very long and public custody battle over his daughter with Anna Nicole. Larry resides in Louisville, KY with his daughter Dannielynn (7), his sister Angie, and her two children Chloe (10) and Justin (23). Helio Castroneves is a three-time Indianapolis 500 champion and former ABC’s “Dancing with the Stars” champion who lives in Ft. Lauderdale, FL with his girlfriend Adriana and their daughter Mikaella (4). Adriana likes to keep a “perfect” home and constantly supervises the work of her housekeeper Sandra.

We will be covering tonight’s Celebrity Wife Swap, Larry Birkhead and Helio Castroneves episode with all the details. You don’t want to miss this episode; you never know what craziness is going to break out! Don’t forget to come back to this spot at 8PM for our coverage of the episode.

Helio Castroneves, a race car driver and Dancing With The Stars alum and his girlfriend Adrianna will be trading places with Larry Birkhead, the father of Anna Nicole Smith’s daughter Dannielynn and his sister Angie (who basically live together like a married couple).

It’s the morning of the swap and Adriana and Angie head to each other’s houses. Adriana arrives in Kentucky, and can’t understand why any favorite person would choose to live there. Adrianna thinks it is a joke how dirty the house is.

Angie is blown away by how beautiful Adriana’s house is, and how white and crisp everything is. She is a little concerned that she can’t find any televisions in the house, but she is thrilled when she realizes she will be living with Helio Castroneves.

Larry arrives and introduces Adriana to his daughter Dannielynn and his niece Chloe and his nephew Justin. Dannielynn thinks that Adriana is scary.

Helio arrives and introduces himself to Angie. Her first task for the night is to supervise the housekeeper as she prepares dinner. Angie is a little confused, she doesn’t see the point in watching the cook cook. If she is going to stand out in the kitchen and tell her how to do it, she might as well just do it herself. She soon learns that the housekeeper she needs to supervise doesn’t even speak Spanish.

It’s time for the wives to have their first dinners with their new families. Adriana is disgusted when she sits down with Larry and the kids and heats cheeseburgers that were picked up at their local fast food restaurant. Larry thinks that Adriana is snobby, and acting like she is above his family.

At Larry’s house Adriana is spending some time with Justin and trying to figure out what he is doing with his life and whether he is going to college. She thinks he needs a “little push.”

Back at Helio’s house Angie is annoyed when he jets off on a boat and leaves her to supervise his daughter’s play date.

Larry has a moment with Adriana and discusses losing Anna Nicole Smith with her. She thinks that Larry’s life has no purpose since Anna Nicole passed away. And, he needs to start moving on.

Angie’s rules include: giving Sandra the day off, Helio has to supervise a play date, their daughter can eat what she wants and where she wants, and Helio needs to plan a romantic day for Angie.

At Helio’s house all of the kids arrive for the play date and Mikaela has a meltdown and Angie has to come in and calm her down. Meanwhile Larry and Adriana are arguing over his junk room and what is going to donation. He takes Dannielynn and Chloe and barges out of the junk room leaving Adriana alone to conquer the mess. He comes back and explains that some of the stuff in the room is his sister’s and his mother’s and he doesn’t feel right going through the room without his family there.

Later, Justin sits down and fills out an application for college. Adriana has him read his essay out loud to Larry since he wrote that he wished he could be as successful as his Uncle, Larry is touched.

Helio’s playdate finally comes to an end and he cleans up the mess they made in the living-room. In Kentucky Adriana is helping Dannielynn organize her closet and put some of her clothe in to storage. Helio and Angie and Mikaela sit down in front of the TV and eat dinner. He confesses that he enjoys it, but he knows Adriana isn’t going to go for it when she comes home.

While Adriana is forcing Larry and his family to eat a healthy dinner all together at the dining-room table, Angie is trying to teach Helio to be romantic and spend more time with his wife Adriana.

The next day Adriana takes Larry to a painting class, and she encourages him to talk to a pretty girl at the class. She wants him to start moving on, and putting himself out there again. He winds up hitting it off with the girl at his class and she gives him her phone number.

The swap is finally over, Larry, Adriana, Angie, and Helio all head to the round table to discuss their experiences with each other’s families. Angie tells Adriana that she thinks that she is to organized and has too many rules in her house. She thinks that her house feels like a museum and Mikaela isn’t even comfortable in her own home.

Adriana explains that she thinks Angie’s house is dirty and unorganized, and they have no rules to live by. Angie points out that they do clean they just don’t have hired help to clean for her. Adriana is disgusted when she hears that they ate dinner on her couch. Larry compares Adriana to a drill sergeant, but he thinks that her rules are very helpful. Angie is in tears when she hears that Justin filled out a college application.

Over all Angie confesses that she learned a lot from the swap, and she is going straight home to organize her closet. Adriana has no intention of changing anything at her house, but the swap did help her appreciate what she has.