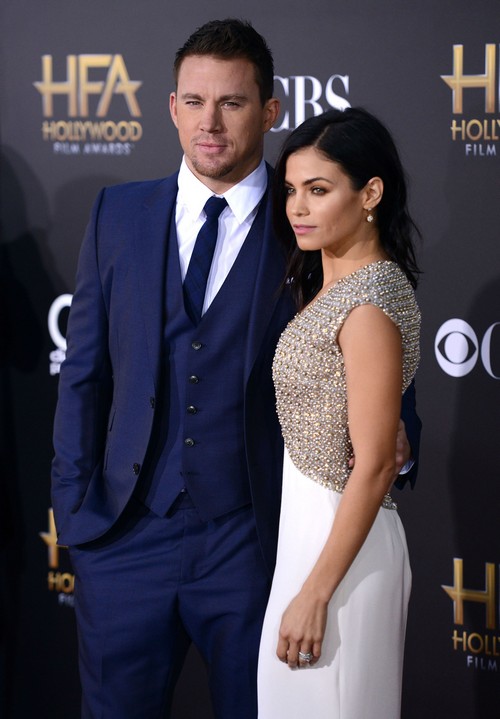 Channing Tatum and his wife Jenna Dewan’s marriage is on the rocks and heading for divorce courtesy of Johnny Depp’s fiancé Amber Heard. News broke last month that Amber and Channing were openly flirting on the set of Magic Mike XXL and insiders are certain they are cheating on their partners with each other. When news of Channing and Amber Heard’s alleged affair broke, her much older fiancé Johnny Depp cracked and fell off the wagon, making a drunken fool of himself at the Hollywood Film Awards. Rumor has it sense Johnny’s antics – Amber has cancelled their wedding indefinitely.

Amber Heard and Johnny Depp’s relationship isn’t the only that has suffered since she and Channing began shamelessly flirting and allegedly hooking up on the set of Magic Mike XXL though. According to the December 12th edition of OK! Magazine, Channing’s marriage to Jenna Dewan is also on the rocks. The mother to his 18 month old daughter Everly has had enough of the cheating scandal, combined with her recent career woes and cancellation of Witches of East End – and is ready to pull the plug.

OK! Magazine reveals that Channing is desperate to save his marriage and “will do anything to avoid a $50 Million divorce,” so he has convinced Jenna to have another baby with him and thinks it will save their marriage. After years of failed Hollywood marriages – you would think that these celebrities would learn that babies aren’t the answer. It’s no secret that Channing Tatum is a “party boy” for life, and has a weakness for beautiful women, in all honesty we’re pretty shocked that his marriage to Jenna lasted this long.

So, do you think that Jenna will get pregnant with a second child and save her and Channing’s marriage? Or is this just the beginning of the end for the young actors? Considering all the rumors floating around about Channing cheating with Amber Heard, should Jenna just cut him loose now? Let us know what you think in the comments below!