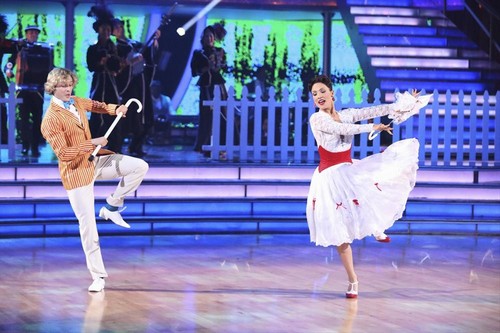 Olympic Ice Dancing Gold Medal winner  Charlie White danced a Cha Cha Cha routine, on tonight’s season 18 episode 6 of Dancing with the Stars with Sharna Burgess for the Disney themed evening.  We posted a nifty bio of Charlie White so you can get more familiar with him. Redfoo from LMFAO serves as a guest judge; and Derek Hough choreographs a Macy’s Stars of Dance number.  If you missed tonight’s show you can read a full and detailed recap, right here.

On last episode Charlie performed a jazz dance and Bruno loved it saying, “Can you do it again and can you do it backwards.  That was one of the best performances we have ever seen.”    They scored Charlie 37/40.

Charlie White and professional dancer Sharna Burgess: dancing a Cha Cha Cha.  Charlie has been getting ready for his dance tonight.  She tweeted, “Thanks to Meryl for capturing this moment… Dang chacha gettin in my head!”

Judges comments: Carrie Ann: “I loved it, that was a sort of party I knew how to do.  You improved on your hip work so much.  The way you made each move go into the next.  it was hot!”  Redfoo: “Hey man I loved it, there were so many styles.  It made me want to dance.”  Len: “Charlie you have the most brilliant musicality it just oozes out like toothpaste.  It was terrific.  I loved it, its great!”  Bruno: “That was my favourite dance, the fact is that you captured it.  You never lost the Cha Cha Cha.  The style was spot on and there all the way through.  This track is hell to dance to you made it look easy.”