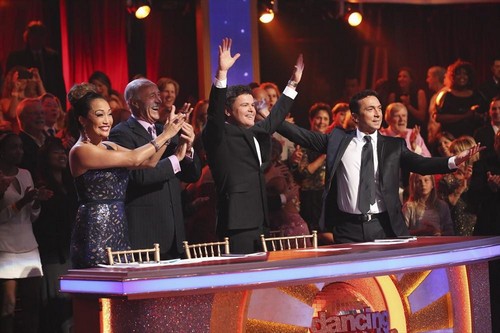 Dancing With The Stars is back tonight with a whole new episode of glitz and glitter and switch-ups. On tonight’s episode another elimination occurs after the sixth week of performances, featuring party-anthem music. Included: Redfoo from LMFAO serves as a guest judge; and Derek Hough choreographs a Macy’s Stars of Dance number.

On last week’s episode the show began with a spectacular opening number featuring the entire cast followed by each couple performing to songs from Disney films which included “The Lion King,” “Aladdin,” “The Little Mermaid” and “Frozen.” The evening also showcased fun elements of Disney animation. Additionally, Season 9 Champion Donny Osmond was a guest judge alongside Len Goodman, Bruno Tonioli and Carrie Ann Inaba.  The couple that was sent home last week was Cody Simpson and his partner Witney Carson.  Did you watch last week’s episode?  We did and we have a full and detailed recap, right here for your enjoyment.

On tonight’s episode the show kicks-off with a spectacular opening performance followed by each couple dancing to some of the greatest party anthems of all-time. Additionally, LMFAO frontman Redfoo will guest judge alongside Len Goodman, Bruno Tonioli and Carrie Ann Inaba. One couple will face elimination.

Next we get introduced to the guest judge for the evening is Redfoo.  As Tom Bergeron says the only guest judge who makes Bruno look like an accountant.  Redfoo is looking for something tonight that is going to rock his sock off.

The results are starting:

ELIMINATED FROM DANCING WITH THE STARS WEEK 6 IS: Drew Carey and Cheryl Burke

Judges comments: Len: “NeNe you covered the market in fun and entertainment and you have yourself ahead to next week.  You have to work on your technique.  Well Done!”  Bruno: “One thing for sure you are one of a kind and you can turn the heat on.  Sometimes your feet where a little bit shaken.”  Carrie Ann: “NeNe that looked like your most comfortable dance.  It was not as intense as last week but it was excellent.”  Redfoo: “You looked like an entrepreneur because you owned that.  You were getting hot, I was getting hot.  I was about to take my things off.  That was hot!”

Judges Comments: Bruno: “Candace looks at what is going on you are sexy and you don’t know it.  You looked fantastic.  Your leg placement is getting better.  Keep the current going all the way through.”  Carrie Ann: “When you hit it it is so great did you hear the audience.  I know you wanted the guys to go but the girls like it.”  Redfoo: “I have two words to say about that outfit Bling, Bling.  At the end there was a moment when you were sexy and then you stopped.”  Len:  “I have to tell you I was concerned about your legs but your leg action was terrific.  Now you have to work on getting a little more rhythmic.  But your leg action woah, woah.”

Judges Comment: Carrie Ann: “You are such a leading man, you have proven yourself over and over again.  Your athleticism with your charm is great.”  Redfoo: “That reminded me of two crabs in the sand.  I know why you have to be quick.  I give you extra props.”  Len: “As a performance you are the one that I want but the technique is tears on my pillow.  There was a rule infringement.  It was good and fast.  Speed came in and style went out.”  Bruno:  “It was very very hard it went to very specific music theatre to very classic performed quickstep.  Yes it could have been a bit lighter.”

Judges Comments: Redfoo: “Ya baby, Danica you just put love in the club.  It looked like you were in love with Val.  That is what I am talking about.”   Len: “I tell you that is the best dance of the night so far.”  Bruno: “You have the vivacity of a purring kitten.  That Cha Cha Cha was so difficult you did it naturally.”  Carrie Ann: “DWTS is about your self journey today you are the full blossom.  It is beautiful Danica.”

Judges Comments: Len: “That was full of attack and purpose.  Maks dances full on you are the first celebrity who is able to match him and keep up with him.  This was special.” Bruno: “The women in back starting in a stirring film noire.  Equally matched, equally pushed, the choreography was incredible.”  Carrie Ann: “Speechless, Meryl from my heart there is something so magical between the two of you.  It is truly artistic.  You look like on of our pros.”    “I say ET phone him.  That was out of this world.  It was like you were gliding off across the solar system from star to star.  It was super, I have never seen anything like that.”

Judges comments: Bruno: “You pimped the tango to maximum effect.  You played with the girl.  The technique was a bit over the place. You put on a great show.”  Carrie Ann: “You brought the best part of Drew back.  You were the life of party.”  Redfoo: “You are all swagged out, you were out of control.  It was pimped to the tenth degree. You were in there.  It’s Drew Carey trick!”  Len:  “What I love with you is your commitment.  You get knocked down and you pick yourself up.  There were a few mistakes, I love your commitment.”

Judges comments: Carrie Ann: “I loved it, that was a sort of party I knew how to do.  You improved on your hip work so much.  The way you made each move go into the next.  it was hot!”  Redfoo: “Hey man I loved it, there were so many styles.  It made me want to dance.”  Len: “Charlie you have the most brilliant musicality it just oozes out like toothpaste.  It was terrific.  I loved it, its great!”  Bruno: “That was my favourite dance, the fact is that you captured it.  You never lost the Cha Cha Cha.  The style was spot on and there all the way through.  This track is hell to dance to you made it look easy.”

Judges comments: Redfoo: “That blew my mind because I don’t know technique that jive was like quickstep – whewwww.” Len: “I understand these people going crazy that was a fantastic performance.  There was an incident in the middle but I love watching you dance.”  Bruno: “Marry me darling, seriously.  This is a real life super here what you have achieved most of us would consider impossible.  I have never seen anybody do what you did tonight.”  Carrie Ann: “Bruno is right the jive is the most difficult dance.  This is the best jive I have ever seen but Len is right there was a slip up.”