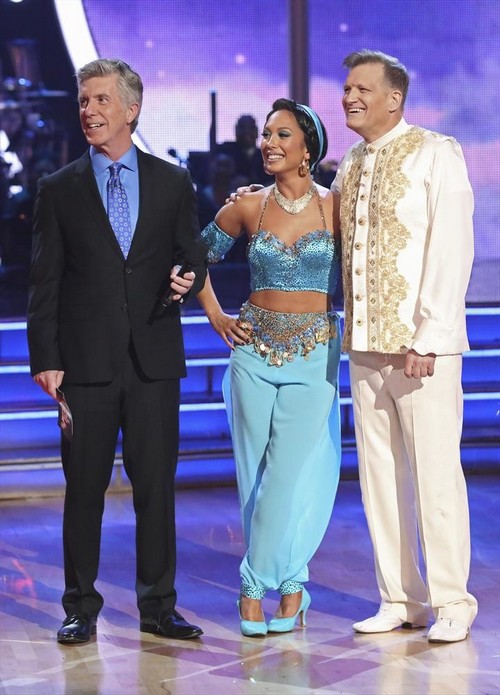 Stand-up comic, actor and producer Drew Carey danced a Tango, on tonight’s season 18 episode 6 of Dancing with the Stars with Cheryl Burke for the party-anthem themed music evening. We posted a nifty bio of Charlie White so you can get more familiar with him. Redfoo from LMFAO serves as a guest judge; and Derek Hough choreographs a Macy’s Stars of Dance number.  If you missed tonight’s show you can read a full and detailed recap, right here.

On last episode Drew performed a Quickstep and Len liked it saying, “First of all let me just say I normally pick people out if they break hold.  But this is a special week this performance was zippity doo dah, but the technique was not.”  They scored Drew 28/40.

Drew Carey and professional dancer Cheryl Burke: dancing a Tango.  Drew has been getting ready for his dance tonight.  He tweeted, “Packing for NYC. Very good chance I’ll be eliminated tomorrow. Thanks for all the love and support either way! :)”

Judges comments: Bruno: “You pimped the tango to maximum effect.  You played with the girl.  The technique was a bit over the place. You put on a great show.”  Carrie Ann: “You brought the best part of Drew back.  You were the life of party.”  Redfoo: “You are all swagged out, you were out of control.  It was pimped to the tenth degree. You were in there.  It’s Drew Carey trick!”  Len:  “What I love with you is your commitment.  You get knocked down and you pick yourself up.  There were a few mistakes, I love your commitment.”