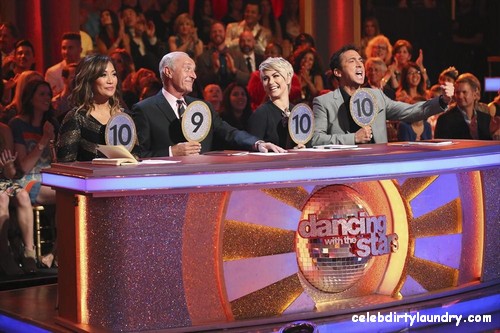 Dancing With The Stars is back tonight with a whole new episode of glitz and glitter and Disney.  On tonight’s episode another elimination occurs after the fifth week of performances, and Donny Osmond is the guest judge for the evening.

On last week’s episode the votes were in and for the first time ever celebrities switched professional dance partners. America was given the power to vote and change celebrity and professional dance pairings and each star had to face the new challenge. The new couples were revealed live for the first time throughout the evening. The show began with an opening number featuring the entire cast of DWTS. Julianne Hough served as a guest judge.  Did you miss any of the performances?  If you did we have all the videos, right here.

On tonight’s episode the show will begin with a spectacular opening number featuring the entire cast followed by each couple performing to songs from Disney films including “The Lion King,” “Aladdin,” “The Little Mermaid” and “Frozen.” The evening will also showcase fun elements of Disney animation. Additionally, Season 9 Champion Donny Osmond will guest judge alongside Len Goodman, Bruno Tonioli and Carrie Ann Inaba. One couple will face elimination.

The full cast kicked off the episode with a number choreographed by Mandy Moore.  The celebs have been reunited with their regular partners and are ready for tonight.

The guest judge for the evening is Donny Osmond.  Donny says he feels like he is home again.  Donny has a long history with Disney.  It was Walt Disney that discovered his brothers.

The night gets on the way showing the top of the leader board is Meryl and the bottom is Candace.

Nene Leakes and Tony Dovolani are in SAFE

Candace Cameron and Mark Ballas are in SAFE

Cody Simpson and Witney Carson are in ELIMINATED

Drew Carey and professional partner Cheryl Burke dancing a quickstep to, “Friend Like Me” from Aladdin [VIDEO HERE]

Judges comments: Len: “First of all let me just say I normally pick people out if they break hold.  But this is a special week this performance was zippity doo dah, but the technique was not.”  Donny: “It is too bad we start with the quickstep.  Tonight I am judging on performance.  I do want to pick out one technical thing and I got busted on it.  If you put an arm out it has to come from the core.”  Bruno:  “Aladdin, Aladdin you had too much to do the technique suffered but you deliver great performances.  You will be better next week.”  Carrie Ann:  “What I like is you always bring the fun and sometimes you make a strange face, don’t let us know your concentrating so much.”

Judges comments: Donny: “At the beginning I said I was going to judge on performance, that was an amazing performance.  It was fantastic.”  Bruno: “Can you do it again and can you do it backwards.  That was one of the best performances we have ever seen.”  Carrie Ann: “Some dances, you are like a wave of happiness.  Every move was so difficult.  Fantastic, stupendous.”  Len: ” Don’t worry about Mary Poppins, that was eye popping, that was fantastic.  You came out and wowed this room.”

Judges comments: Bruno: “Baby, you tamed the beast.  That really was a delicious feast for the eyes.  Your improvement is incredible.”  Carrie Ann: “That was so good, I feel like your Mom.  You were gorgeous.  The line was fantastic.  Beautiful hold.”  Len: “Everything Carrie Ann said but you lost body contact a bit.  You are a fantastic dancer.”  Donny: “I was hoping I would like it.  You knocked it out of the park.  I loved it.”

Judges comments: Carrie Ann: “The bad new is I always call lifts, but I cannot take a point off you because of your unique situation.  You created magic.  I hope Disney makes their next princess like you.”  Len: “It had a wonderful drift, that was beautiful.”  Donny: “I don’t know how you are doing it.  I watched your dance and literally cried.  The word that is used is inspiring you are more than inspiring.”  Bruno: “My darling you have never looked more beautiful.  I love you.”

Judges comments: Len: “I liked the energy you brought out, great timing.  I tell you what you came out and sold it.  Well done!”  Donny, “I thought the dancing was phenomenal.  Did you like the dance, it did not come across.  You were working it.  It is suppose to be all about the joy.”  Bruno: “Donny you turned to the dark side listen to the good fairy.  Simba brought the Samba out of Africa.  Incredible timing.  I am telling your great.”  Carrie Ann: “Cody, tonight I felt the power of Cody.  You performed like I have never seen.  I have to say I loved the performance.  You brought the now to the performance.”

Judges comments: Donny: “You owned that dance floor.  We should call this Dancing with NeNe.  It was like hot lava.  It was fantastic.”  Bruno: “NeNe you mean nasty girl.  It always works.  You put put and grind into the foxtrot but you never lost the style.  It suited your personality.”  Carrie Ann: “NeNe I hate to say it but you can rock the villain. Tony the best choreography ever. It was wonderful, it was fantastic.”  Len: “While you know NeNe sometimes you think you want a divorce and you realize the folly of your ways.  You too are a match made in heaven.  Your best dance.”

Judges comments: Bruno: “That was a contemporary blockbuster and not just because of the song.  You dance with such sincerity.  So close to the spirit of the song.”  Carrie Ann: “You know, what I see here was pure artistry.  I did not expect this from you.”  Len: “That would melt the coldest heart, even mine.  Thats fantastic!”  Donny: “Such amazing choreography, that was beautiful.  James I was mesmerized by the athleticism.  I was blow away by the performance.”

Judges comment: Carrie Ann: “I am a little puzzled you are like you dance as part of one body.  I have never seen Maks dance so intune with someone.  There is something very special here.”  Len: “A wamba of a samba.  It was great and terrific.  Well done.”  Donny: “You guys have set the bar so high.  That was thoroughly entertaining.” Bruno: “I thought about jungle fever.  It was really was a wonderful, wonderful dance.  Thank you Maks for the eyeful.”

Judges comments: Len: “I like the mix of steps you put in there.  Your legs could have straightened a bit.  But it was so much fun.”  Donny, “I know being at the bottom of the leaderboard is discouraging.  Don’t give up, what I saw was so promising.”  Bruno: “I really like what I saw, it was like the rebirth of Venus.  You let yourself go, you let it loose and it worked.”  Carrie Ann: “Your one of my favorite movers.  When you are in the zone I love it.  Every now and then you get nervous.  You have another notch.  It really is a mind game.  You are incredible.”