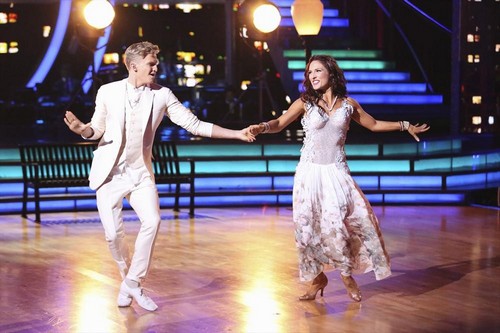 Singer and author Cody Simpson danced a Samba, on tonight’s season 18 episode 5 of Dancing with the Stars with Witney Carson for the Disney themed evening.  We posted a nifty bio of Meryl Davis so you can get more familiar with her.  Season 9 Champion Donny Osmond guest judged alongside Len Goodman, Bruno Tonioli and Carrie Ann Inaba.  If you missed tonight’s show you can read a full and detailed recap, right here.

On last episode Cody performed an Foxtrot and Julianne loved it saying, “When you do what you do yoru brilliant.  Right now you are hovering in this no zone place of in between.  TO go to the top you have to embrace this.  It was great, it was awesome.”   They scored Cody 31/40.

Cody Simpson and professional dancer Witney Carson: dancing a Samba.  Cody has been getting ready for his dance tonight.  He tweeted, “just wrapped dancing with the stars rehearsal. Disney week next Monday! pretty stoked!!!! they’re gonna call me Simba”

Judges comments: Len: “I liked the energy you brought out, great timing.  I tell you what you came out and sold it.  Well done!”  Donny, “I thought the dancing was phenomenal.  Did you like the dance, it did not come across.  You were working it.  It is suppose to be all about the joy.”  Bruno: “Donny you turned to the dark side listen to the good fairy.  Simba brought the Samba out of Africa.  Incredible timing.  I am telling your great.”  Carrie Ann: “Cody, tonight I felt the power of Cody.  You performed like I have never seen.  I have to say I loved the performance.  You brought the now to the performance.”