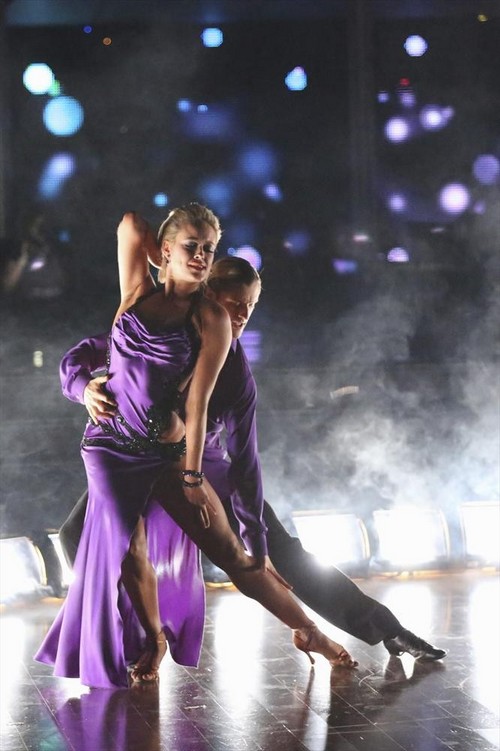 Olympic Ice Dancing Gold Medal winner  Charlie White danced a Jazz routine, on tonight’s season 18 episode 5 of Dancing with the Stars with Sharna Burgess for the Disney themed evening.  We posted a nifty bio of Charlie White so you can get more familiar with him. Season 9 Champion Donny Osmond guest judged alongside Len Goodman, Bruno Tonioli and Carrie Ann Inaba.  If you missed tonight’s show you can read a full and detailed recap, right here.

On last episode Charlie performed an Rumba and Julianne loved it saying, “I thought it was absolutely stunning.  You are a mother’s dream, I love you so much.  Your kinda on your heels and back weighted.  When you go on the balls of your feet that is grounded.”   They scored Charlie 33/40.

Charlie White and professional dancer Sharna Burgess: dancing a Rumba.  Charlie has been getting ready for his dance tonight.  She tweeted, “Long Island tonight! Catching a late flight to LA post show just in time for @DancingABC tomorrow!”

Judges comments: Donny: “At the beginning I said I was going to judge on performance, that was an amazing performance.  It was fantastic.”  Bruno: “Can you do it again and can you do it backwards.  That was one of the best performances we have ever seen.”  Carrie Ann: “Some dances, you are like a wave of happiness.  Every move was so difficult.  Fantastic, stupendous.”  Len: ” Don’t worry about Mary Poppins, that was eye popping, that was fantastic.  You came out and wowed this room.”