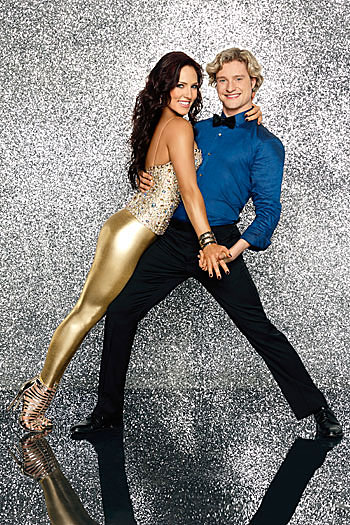 Olympic Ice Dancing Champion Charlie White danced a Contemporary routine, on tonight’s season 18 première of Dancing with the Stars. For the first time ever the show will premiere with a massive opening number featuring all pro dancers as they perform live with musical guest Jason Derulo.   We posted a nifty bio of Charlie White so you can get more familiar with her.  If you missed tonight’s show you can read a full and detailed recap, right here.

Charlie White and professional dancer Sharna Burgess: dancing a Contemporary.  Charlie has been getting ready for her dance tonight.  She tweeted, “Ready to rock the house with our emotional contemporary dance″

Judges comments: Carrie Ann: “You guys are a perfect match.  It is an interesting combination.  I love the union, it was poetry in motion.”  Len: “This was  a good dance for you, it was the perfect dance. Fantastic!”  Bruno: “You’re an artist, the attention to detail was incredible.  it had a dramatic story arc.  When you start at this level it is a high standard to maintain.  That was astonishing.”