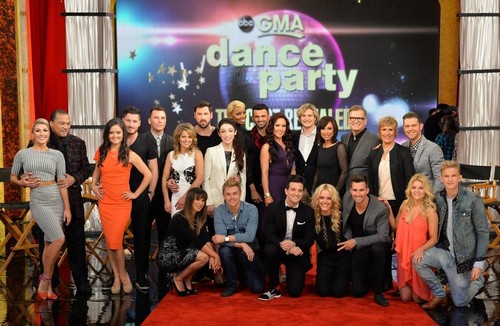 Are you guys ready for a new season of Dancing With the Stars? Well season 18 kicks off tonight at 8PM EST on ABC and the battle for the Mirrorball Trophy is sure to be pretty fierce! For the first time ever the show will premiere with a massive opening number featuring all pro dancers as they perform live with musical guest Jason Derulo. Derulo will sing his mega hit song “Talk Dirty,” marking the first time ever a musical guest has accompanied a season’s opening number. Each couple will then perform a Cha Cha, Foxtrot or Contemporary routine, vying for America’s vote.

That’s not the only change that you’ll see on DWTS’ in season 18. Brooke Burke has been replaced by Erin Andrews for co-hosting duties and this season will also include something called “The Switch Up”. For the first time ever, America will be given the power to vote and change celebrities and professional dance pairings. This new rule will affect all couples as they will be required to switch partners at one point in the season and should help to breathe a bit of live into DWTS’ staling format.

Tune in tonight at 8PM EST on ABC to watch the stars all hit the ball room for the first time. We’ll be recapping it for you live right here. In the meantime hit up our comments section and tell us who you are already rooting for!

The wait is over, Dancing With The Stars is back with the most competitive cast ever (or so they say), and it all starts right now.  For the first time ever tonight’s show opens with a performance by the whole cast with musical guest Jason Derulo.  Jason is singing his hit song, “Talk Dirty.”

We are getting a look at the new live band, the new musical director and the new stars.  Time to get the dancing started:

Judges comments:  Len: “Nina I tell you what that is the way to get the party started.  It was like an all you can eat buffet of fun and entertainment.  Great start, well done!”  Bruno:  “That is my kind of girl, I feel you have so much to give.  I love your energy.  Good to see you girl.”  Carrie Ann: “Are you crying, what is going on.  Are you okay?  Why are you crying. You this incredibly larger than life personality.  Your a big large voluptuous women I want you to dance bigger.  I want you to give more.”

Judges comments: Bruno: “James is on a mission such vigor and attack.  I love the fact you put a lot effort in the dance.  You have to make it look more effortless, better footwork.  Good for a first effort.”  Carrie Ann: “I have a big time crush on you, you are so cute.  You have natural elegance.  You lost a bit of your stature but nice job.”  Len: “You and I know why we are here, for a bit of eye candy for the ladies.  I thought you did a good job, you attempted to get the footwork right.  You need to keep the frame in one place, but you came up and sold it.”

Judges comments: Carrie-Ann: “You are so adorable.  Your enthusiasm for the dance is so cute.  You and Val have so much energy.  Your energy is way up here sometimes a little too expressive with the mouth.”  Len:  “Your holding  a little bit tight on Val.  My first impression is terrific well done”.  Bruno: “You are a good kisser, your so enthusiastic.  Seriously you are a good actress.  You played off him, you sold it so well.  Control getting so involved because you lose it there.”

Judges comments: Len: “The ice man commith, that was full of intensity, it need a bit more finesse.  I thought you did well, well done.”  Bruno: “I was surprised, I thought you were going to be a lump of ice.  Sometimes the links were jagged.  But you did very well.”  Carrie Ann:  “I think you are fascinating to watch performing.  You have to learn to point your toes.  Well done.”

Judges comments: Bruno: “Bill may the force be with you.  I can never forgive you for freezing Hans Solo. You played it really dainty.  I want bigger and more powerful.”  Carrie Ann: “You are definitely the most relaxed dancer I have ever seen, we are going to need more from you next week.”  Len: “You were on time, you did not forget your routine.  You just have to come out with more.  You did a good job, well done.”

Judges comments: Carrie Ann: “That was really exciting to watch, you lit up the ballroom.  I should expected it.” Len: “I tell you, you are nice on ice but good on wood.”  Bruno:  “You have to be the queen of spins.  Watch the back of the legs, so good, what a debut.”

Judges comments: Len: “You can dance, well done.”  Bruno:  “I was torn between ecstasy and torments.  You are a Contemporary dancer.”  Carrie Ann: “Where did you come from?  You are an incredible dancer.  I want to work with you.  That was amazing I want to see this again.”

Judges comments: Bruno: “You are the poster couple for youth.  I feel exuberated watching you too.  All the cool stuff you do well, but the basic Cha Cha watch.  You have charisma by the truckload.  Carrie Ann:  “You are fantastic in the upper body.  You have big feet, you have to work on lower body.”  Len: “You have to work on your finesse but GOOD job!”

Judges comments: Carrie Ann: “Every season there is one contestant that makes everyone smile, I loved it.”  Len: “That was very watchable, I enjoyed it from the first moment.”  Bruno: “You did it with your personal touch, you did a lot of content.  It could be a little better. But, so entertaining.”

Judges comments: Len: “We can’t judge you any different than any other star.  It is all about the dancing.  You got a gold medal tonight in the Cha Cha.”  Bruno: “We have wonder women, timing, shape, performance level, I am gob-smacked.”  Carrie Ann: “I am shocked.  You are a beacon of light in this world.  It was a honor to watch you dance.”

Judges comments: Bruno: “The million dollar mermaid.  You did not do bad, you have to be a bit lighter.  You are going in the right direction.”  Carrie Ann: “You are like a slowly opening flower.  I enjoyed watching you.  That technique is going to take you far.”  Len:  “If determination and the will to make it through you are going to make it.”

Judges comments: Carrie Ann: “You guys are a perfect match.  It is an interesting combination.  I love the union, it was poetry in motion.”  Len: “This was  a good dance for you, it was the perfect dance. Fantastic!”  Bruno: “You’re an artist, the attention to detail was incredible.  it had a dramatic story arc.  When you start at this level it is a high standard to maintain.  That was astonishing.”

Next week we will see the first eliminations, so make sure to vote.