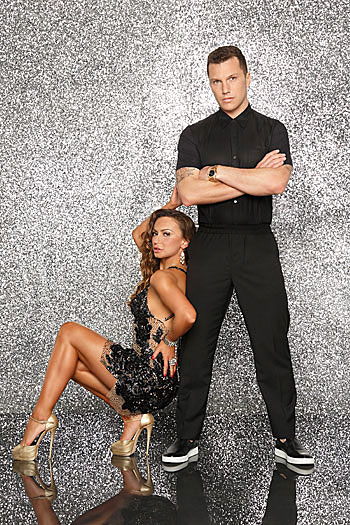 Former Pro Hockey Player Sean Avery danced a Contemporary routine, on tonight’s season 18 premeire of Dancing with the Stars. For the first time ever the show will premiere with a massive opening number featuring all pro dancers as they perform live with musical guest Jason Derulo.   We posted a nifty bio of Sean so you can get more familiar with him.  If you missed tonight’s show you can read a full and detailed recap, right here.

Sean Avery and professional dancer Karina Smirnoff: dancing a Contemporary.  Sean has been getting ready for his dance tonight.  He tweeted, U ready for us to blow this up #DWTS Vote 1-800-868-3404

Judges comments: Len: “The ice man commith, that was full of intensity, it need a bit more finesse.  I thought you did well, well done.”  Bruno: “I was surprised, I thought you were going to be a lump of ice.  Sometimes the links were jagged.  But you did very well.”  Carrie Ann:  “I think you are fascinating to watch performing.  You have to learn to point your toes.  Well done.”