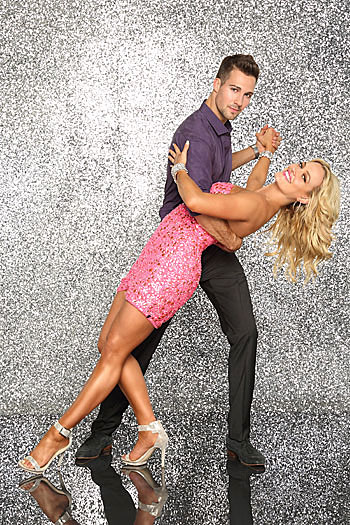 Singer and Actor James Maslow danced a Foxtrot, on tonight’s season 18 premeire of Dancing with the Stars. For the first time ever the show will premiere with a massive opening number featuring all pro dancers as they perform live with musical guest Jason Derulo.   We posted a nifty bio of James so you can get more familiar with him.  If you missed tonight’s show you can read a full and detailed recap, right here.

James Maslow and professional dancer Peta Murgatroyd: dancing a Foxtrot.  James has been getting ready for his dance tonight.  He tweeted, “Make sure you all vote for #TeamJeta tomorrow after the show! The information is in the picture. Xoxo, JM”

Judges comments: Bruno: “James is on a mission such vigor and attack.  I love the fact you put a lot effort in the dance.  You have to make it look more effortless, better footwork.  Good for a first effort.”  Carrie Ann: “I have a big time crush on you, you are so cute.  You have natural elegance.  You lost a bit of your stature but nice job.”  Len: “You and I know why we are here, for a bit of eye candy for the ladies.  I thought you did a good job, you attempted to get the footwork right.  You need to keep the frame in one place, but you came up and sold it.”