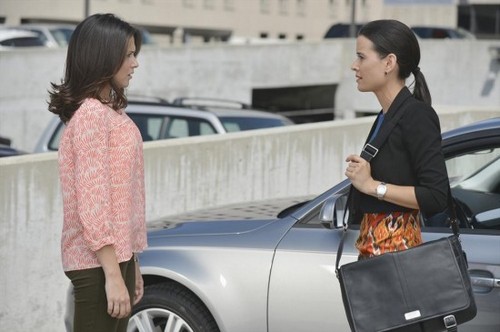 Chasing Life comes to ABC Family tonight for the second episode of season 1. Tonight’s episode is called “Help Wanted” and on tonight’s episode April hides her diagnosis and focuses on work, which includes profiling a gubernatorial candidate. Meanwhile, Sara finds success with online dating, but she faces a tough parenting situation; and April uncovers something shocking about her own family.

On the last episode in the series premiere of this drama about an ambitious reporter who won’t give up on her dreams, April got a chance to impress her boss and her office romance began to prosper, and then she received unexpected news: she’d been diagnosed with cancer. Did you watch the last episode? If not, we recapped it all right here for you.

On tonight’s episode as April learns more about her cancer and prospective treatment, she is determined not to let it affect her progress at work. A new assignment to profile gubernatorial candidate Bruce Hendrie leads to an unexpected run-in with his son, Leo (Scott Michael Foster). April also makes a startling discovery about her family. Meanwhile, Sara makes progress with her online dating but struggles with solo parenting when she learns Brenna lied about her “extra-curricular” activities.

In tonight’s second episode of the season, April approaches the woman at her dad’s gravesite who claims to be her sister. The woman says today is her dad’s birthday. Unsure of what to do, April attempts to indirectly extract more information from the woman. Alarmed by April’s questions, the woman quickly leaves the cemetery. As she rides off, April takes a picture of her license plate.

During a casual lunch with her best friend Beth, April admits to having received news that she has leukemia and is now back in touch with her estranged uncle. In a panic, Beth begins to cry and expresses her fears about the potential that April may die. Beth’s emotions continue to get the best of her as the episode proceeds. She begins to act awkward and overprotective of April.

A hungover Brenna asks April to take her to retrieve her lost phone. The two banter back and forth as Brenna refuses to tell April about what happened to her at the party. Frustrated, April lashes out at Brenna, telling her that she doesn’t have time to sit around and do nothing.

April heads off to meet with her uncle George in his office where they discuss her condition and plans for treatment. April tells her uncle that it is bad timing and he responds sympathetically. Without knowledge that April has yet to tell her family about the cancer, George urges April to tell her boss.

In the office, April’s boss tells her the good news that Bruce Hendrie is entering into the political arena and assigns her to be in charge of covering his campaign. He introduces April to her new supervisor, Raquel. After her first conversation with Raquel, April admits that she has a “professional crush” on the woman that she then perceived as being strong and wise. She soon finds that Raquel is not only wise but vindictive.

Meanwhile, Sara finds out about Brenna’s attendance at the party the night before. Brenna goes to Kiernan’s house to pick up her phone. Kiernan teases her but then invites her to an art show as a peace offering for getting her in trouble with her mom. Sara later tells Brenna that she isn’t grounded but needs to find a job. Angry at her mother, Brenna makes a smut comment about her mom not knowing who she really is.

April has a romantic rooftop dinner with Dominic where she met his heartbroken and cynical roommate, Graham. Dominic convinces April to talk about her dark past in which she had a falling out with her uncle. April confides in Dominic and tells the story of her dad’s fatal car accident in which George was in the driver seat. Soon after the accident, April says, George isolated himself from the family. He went as far as not showing up to her dad’s funeral.

It is evident that George’s absence during the family’s time of need has left a scar on April. Dominic talks about his admiration for April as being a strong and stable woman. He says he doesn’t like drama or the damsel in distress act. Hiding the fact that her illness is a lot more drama than Dominic would like if he knew, April drinks her feelings away. The next morning, April wakes up in Dominic’s bed with little memory of the night before. She is unsure of what she said or did. So far, Dominic has showed no indication that he knows about the cancer.

Raquel tries (and is successful) in stealing April’s first interview with Bruce Hendrie. Fortunately, April did get to speak with one Hendrie that day as she had a brief encounter with Bruce’s son Leo in the parking lot. Seemingly arrogant and smut, Leo assumes April is a new intern who is surely also sleeping with his dad. He speeds off soon after leaving a damaged car and a speechless April behind.

After her job hunt, Brenna goes to Kiernan’s art show where she is harassed. Embarrassed from what happened at the party the night before, Brenna hurries to leave the event but Kiernan stops her. There at the tattoo parlor Brenna sees a help wanted sign. Sara was not happy to hear of the news that her daughter would be working at a tattoo parlor but later reasons with her. Mother and daughter talk through their issues and end at a good place.

The episode ends with April discovering that Natalie Ortiz is the name of the woman she met at the cemetery, Beth apologizing to April about her strange behavior, and George agreeing to be April’s doctor.