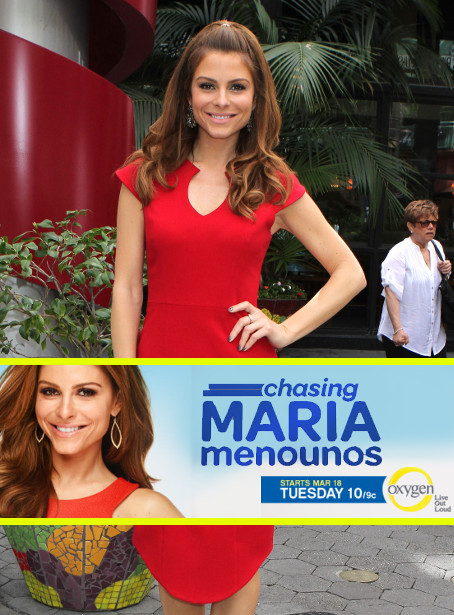 Chasing Maria Menounos, Oxygen’s new docuseries exploring the interesting life of television personality Maria Menounos, premieres March 18th. The show will provide an intimate look into the popular Extra host’s everyday life, including how she successfully balances her professional world with her household and family — which, at the moment, consists of her longtime boyfriend and her two Greek parents! CDL was lucky enough to participate in a conference call with Maria Menounos and boyfriend/show producer Keven Undergaro. The two were classy, fun, and proved to be two characters that’ll definitely make for some great reality TV viewing this springtime!

When asked the question, What’s the most lavish thing about your lifestyle, Maria responded with a humble answer — one I think many celebrities can relate to, in some way or another. “The business that we’re in [is the most lavish],” Maria said. “[Recently], I was at the Oscars and, you know, you’re getting drenched in diamonds and dressed in gowns. And then the next night you’re going to dinner at Chili’s in your sweats. I enjoy the perks to all of this, but there’s also a reality to it all, too.”

However, Maria admits that living (and securing a spot) in the Celeb World — a universe of glitz and glam — doesn’t come without making sacrifices along the way. “I don’t even know how to answer this,” she said when asked how she lives (and has lived) her dream over the yeras. “I feel like I’ve known what I’ve wanted to do since I was very young. I worked hard to run through every open door and make good choices. I feel like I’ve had to sacrifice a lot to get here.”

The show will primarily document Maria’s relationship with Keven and her Greek parents, who want her to get married and have SO MANY BABIES. As the cameras pan across the professional landscapes Maria interacts with on a daily basis, the show will also strive to contemplate a question that, Maria admits, so many young professionals are faced with today: When’s the right time, the best time, to begin a family?

“We really don’t know when the right time is and we’re really excited about our careers and lives — and we’re definitely wanting to prolong it as long as possible. I’m meeting more women than ever who feel like this. I’m really trying to hold off the sense that everyone is pushing me. There are moments when I really feel like I’m about to throw in the towel — but that’s just not me.”

How do Maria and Keven keep their relationship hot and spicy?

Maria: “You know, when you’ve been together so long, you have your ups and downs. I guess the big thing is that we try.”

They also have a hot tub to keep the romance bubbles going. But don’t think you’ll be getting too much of a glimpse into their private lives. When asked about the things that will definitely be kept OFF camera, Maria joked, “I mean, we’re obviously not going to let them in our bedroom when we’re, um, doing anything.” I think you’re correct, Maria. After all, it’s not like this is going to be airing on HBO or anything.

Chasing Maria Menounos premieres Tuesday, March 18 (10 PM ET/PT) on Oxygen. Will you be tuning in? We will!