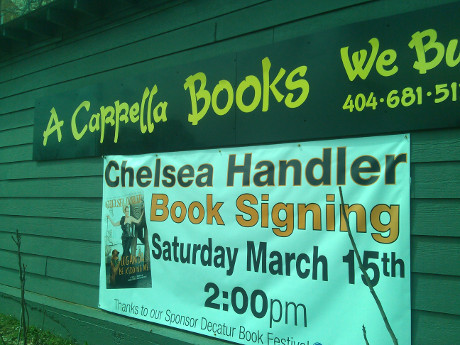 Comedian Chelsea Handler paid a visit to Atlanta, Ga on March 15. She was there for a book signing and stand up show to promote her book Uganda Be Kidding Me. Before her show, Chelsea signed her book (which is #1 on the New York Times best seller list) for fans at A Capella Books. She was sweet to everyone. Chelsea made eye contact, smiled, and said hello to everyone as she signed their book.

Chelsea also did some press before she went on stage. She was interviewed by Mike Galanos from HLN. Mike got right to it at the start of the interview. After congratulating Chelsea on her book going to #1 on the New York Times best seller list, he asked her a very personal question. Chelsea writes in her book about her attraction to her tour guide in South Africa. Mike pressed for details on whether or not she got anywhere with the guy. Chelsea retorted that it was a personal question and none of his business. Mike asked Chelsea if she watches The Bachelor. She said no and asked why he was watching. Chelsea said Mike had better things to do.

Since he works in news he should be researching a story. Mike’s response was that he was watching the show with his wife. Chelsea couldn’t believe he was married and rattled off several reasons why she thought he was still single. Also, Chelsea thinks Mike should not be covering entertainment stories. That’s her job. Mike does a serious news show and he should stick to that.
Mike took Chelsea’s jabs in stride. However, you could tell he was embarrassed after he was taken down by a comedian.

Comedian Chris Franjola opened the show. He is a writer and round table regular on Chelsea’s show Chelsea Lately. Chris had the crowd roaring with laughter! The first thing he said was “I have a bone to pick with you, Atlanta!” After a pause, he shouted, “The Clairmont Lounge!” Chris was given a suggestion to check out the skeevy strip club. He went on to berate the city of Atlanta for the Snowpocolypse that occurred in January and February.

Immediately after Chris’ set Chelsea took the stage. She had a slide projector next to her on a table. She told stories from her recent vacations (the topic of her book). Chelsea showed the audience her personal and very embarrassing pictures from these trips. She told one story that would be hard to believe if you didn’t know anything about her. Chelsea ate something that didn’t agree with her. She was swimming in the ocean but didn’t make it to the bathroom. She only made it to the beach. After soiling herself in her bathing suit Chelsea cleaned herself up on the beach. She again tried to make it to the bathroom but didn’t get far. Luckily, she was still on the beach. Chelsea covered her feces in sand like she was in a litter box. She then stole a canoe, loaded it up with the soiled sand, and took it out to sea. Chelsea ended the story there.

You can see Chelsea on her talk show Chelsea Lately Monday through Thursday at 11pm on E!