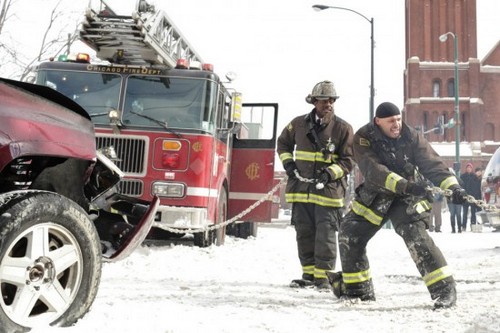 Tonight on NBC their new drama CHICAGO FIRE continues with a new episode called, “A Rocket Blasting Off.”  On tonight’s episode Det. Lindsay narrows down potential suspects in Keeler’s disappearance, and Severide’s motives place him at the top of her list. Elsewhere, Jones’ disruptions are noticed by headquarters.  Did you watch last week’s episode?  We did and we recapped it right here for you.

On last week’s episode Severidewas getting impatient with the police as Vince Keeler walked free. Meanwhile, the house pulled out all the stops to save a girl trapped inside a donation bin, Mouch learned that Boden’s secretary Connie was not someone to mess with and the squad and truck were called to a serious high rise fire inside a 20-story downtown office building. Jesse Spencer, Monica Raymund, Lauren German, Charlie Barnett, David Eigenberg, Yuri Sardarov and Joe Minoso also star. Treat Williams, Sophia Bush, Jeff Hephner and Daisy Betts guest star.

Tonight’s episode looks like it is going to be great and you won’t want to miss it, so be sure to tune in for our live coverage of NBC’s Chicago Fire at 10:00 PM EST! While you wait for our recap hit the comments and let us know what you think of Chicago Fire, so far?  Check out the sneak peek of tonight’s episode below!

In tonight’s episode, Herrmann opens up about his anniversary surprise for his wife. The two are celebrating 20 years together and he thought she would appreciate it if he got a vasectomy. If that sounds like a bad idea it’s because it is. Even the guys think so. They try to tell Herrmann to think about but his mind is set. He’s going through with the procedure and then he’ll celebrate with his wife and extended family at Molly’s.

Though there was a mistake in his plan and it was choosing Molly’s as a venue. He didn’t know that Dawson booked the place for her family get together. He didn’t know about it because she booked her party on the website and he didn’t even know that Molly’s had a website.

He tried pleading with Dawson but it was a no go.  She has family flying in and she can’t rearrange everything at the last minute. Besides it would be nice for her to have family around. She failed the test to be a firefighter and that is still hanging off her shoulders. And let’s not forget that Jones is still in the picture so naturally it’s extra hard watching someone else live out your dream.

Then there’s her boyfriend who she’s beginning to suspect doesn’t want her to pass the test next time. Casey wants to be supportive enough that he’s ok with his girlfriend actually becoming a firefighter and yet he doesn’t want her to be in danger. And someone should tell him that he’s Sugar Honey Ice Tea out of luck.

Dawson is only a paramedic and her job is dangerous. She and Shay were out on patrol when a couple of guys waving guns tried to enter the ambulance. They were on call helping a victim but these guys wanted them dead. And if it hadn’t been for the cops; they would have succeeded.

The police department has gotten bad reputation lately with the Keller situation. They let him walk off scots free from several charges and now they’re hounding the department looking for suspects in his disappearance. Lindsey brought Severide in for questioning but then he was cleared so the cops started looking at other possible suspects. Or in this case other people that had a grudge.

Like Otis who was dating Keller’s victim prior to her abduction. Now no one at the station honestly thinks Otis is involved yet he has been acting suspicious lately. Plus it’s never a good sign to be fidgety in front of Detectives.  Lindsey and Sergeant Voight view that type of behavior as guilty. Still the crimes doesn’t appear to fit Otis. Though you never know he may have had a partner.

Severide’s dad was still in town and Severide mentioned to him that Otis was being considered as a prime suspect.

When he said it to his old man he noticed a sudden shift.  His father was acting like everything was normal but something was different. His father was speaking to Shay about baiting fish and it was the way he said that everyone should have partner while hunting that made Severide look at his father differently.

As for the older Severide, he stopped by the police station and asked for Sergeant. Whatever he confessed to other man in a secret led the Sergeant to telling him he was a good father before leaving him.

If only all fathers could be given that title. Jones gave Herrmann a cake in the shape of a penis. She thought it would be funny seeing as he’s getting snipped soon and he did find it funny. The same goes for the rest of the station. They were all laughing, but Connie thought that wasn’t for the work place. So she filed a complaint saying Jones created a hostile environment.

That strike earned its way to coming across Jones’s father’s desk. The Chief and Casey had to report the situation and the older man wasn’t all that surprised. He knew that his daughter would pull a stunt and he waiting to use it to get her on desk duty.

Neither the Chief nor Casey believes her actions warrants her to be put on a desk, but they can’t say no to their boss. No matter how useful Jones is proving herself to be. They agreed to his terms to slowly wean Jones into desk position and in return Casey wanted a favor.

Dawson wants to retake the test and she can. There is a loophole that allows her to take the test sooner and Casey got it for her just in time for the party. Dawson knew what he did and yet suddenly she was prepared to stop talking about how unfair Jones’s father was being to his daughter.

Now if there’s any guilt she can simply drink it away!

Dawson’s party ended up getting combined into Herrmann’s party. He wanted a big get-together when he told his wife her surprise and contrary to what his friends thought; she was happy with her gift. She was also pretty happy in the way he said it – with the help of a penis shaped cake.

Otis was going to use a friend as an alibi even though he wasn’t the one to go after Keller. He quite upset to tell you the truth that Keller was still out there and could be anywhere. Then Severide told him Keller wasn’t out there. Severide could have meant a lot of things although it sounded like he knew that Keller was dead but the question is how?

Who exactly was his father a good dad to?