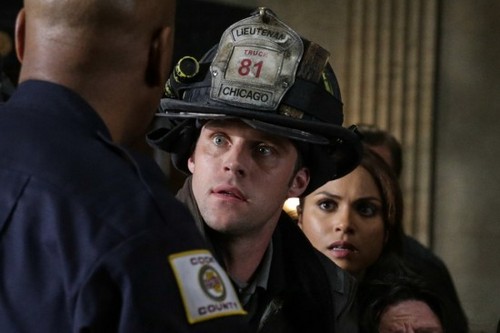 Tonight on NBC their new drama CHICAGO FIRE continues with a new episode called, “Keep Your Mouth Shut.”  On tonight’s episode Severide grows frustrated when Vince Keeler goes free, but he maintains hope that justice will prevail. Meanwhile, the firefighters work to rescue a girl trapped inside a donation bin.  Did you watch last week’s episode?  We did and we recapped it right here for you.

On last week’s episode Severide felt sidelined as he left Detective Lindsay and the Intelligence Unit to do their job and located his sister Katie. Shay got an unusual tip from Chicago Blackhawk players Brent Seabrook and Duncan Keith, who made friends with Clarke and stop by Molly’s. Meanwhile, Casey learned more about his head injuries after another close call and Dawson pushed hard to pass the physical test at the Academy. Eamonn Walker, Charlie Barnett, David Eigenberg, Yuri Sardarov, Joe Minoso and Christian Stolte also starred. Christine Evangelista, Brittany Curran, Melissa Ponzio also guest starred.

Tonight’s episode looks like it is going to be great and you won’t want to miss it, so be sure to tune in for our live coverage of NBC’s Chicago Fire at 10:00 PM EST! While you wait for our recap hit the comments and let us know what you think of Nashville, so far?  Check out the sneak peek of tonight’s episode below!

Dawson is still feeling raw about losing out on her final exam to be fire fighter. And what makes it harder for her is the fact she has to watch Jones, who she doesn’t feel deserves it, do her dream job. Jones is cocky but deep down all she wants to do is be good at her job. Dawson knows that but she doesn’t have to like it. And neither does Casey.

He tends to give Jones a hard time even though it’s her first day on the job. Though someone should remind him that he is the lieutenant and that means to look out for the newbies not tear them down. Jones accidently dropped an expensive piece of equipment during her first run. No one else called her out on it and frankly she should have been allowed to make mistakes without her superiors chewing her out for it. Which is surprising because Severide would usually have intervened.

So Casey asked him about Jones and what a recruit she would make but he didn’t like the answer.  Severide doesn’t think jones can be a good firefighter as long as she has that massive chip on her shoulder.  Way to leave it to the last minute there. He should either have his head in the game or go back to taking some of his leave until the situation with Keeler gets worked out.

Because regardless of what he claimed to Otis, he can’t live with Keeler getting away with what that man did to his sister. That’s why Severide enlisted both Clarke and Capp for something.

Jones later goes to him to complain about Casey. She believes she’s getting persecuted for ousting his girlfriend and shouldn’t have to deal with unfair treatment but she approached Severide when not only was he in the middle of something but he also wasn’t alone. He was at the squad table. A place she shouldn’t be and which he quickly reminded her of.

Severide doesn’t have time for station pettiness. The same way he doesn’t have time for his dad suddenly reappearing. Benny arrived full of concern for his daughter when she could have used his support over a week ago. It seems Katie’s mother told him to stay away for a while and when he was able to come up; Katie was already gone.  So it’s not like he didn’t try. It just that again it wasn’t enough.

Jones is giving everyone trouble. Even Herrmann can’t stand her and he was in a good mood. He took the test and now all he has to do is wait for his promotion. The chief was proud and he was proud of himself. And then all of that gets ruined when he goes out into the field with Jones because she gave him orders.

The guys find her entitled and cocky. They went as far to say so to Casey. They were using her behavior as an excuse that she wasn’t a good fit for the station. But Casey defended her. He explains to Dawson that the guys wouldn’t be saying those things if Jones was a man. Dawson on the other hand doesn’t see it that way.

She doesn’t like Jones. There is no other reason for it than she simply doesn’t like Jones. While Casey is of the mindset that they should at best give her a chance to prove herself.  He’s a female firefighter and no one wants to put a woman in danger but it’s about time everyone learns to accept it. Well his girlfriend agrees with him up to a point.  People should be more open to a female on the truck as long as it isn’t Jones.

And as her boyfriend that supposed to be supportive then he should just accept that Jones is a horrible person – according to Dawson. If Shay can understand then why can’t he?

Yet if people were to look past their personal prejudices, they would see how much the jobs means to Jones. On her first day and third call she was finally able to show them how committed she was. There was a fire in a high rise and she was the only keeping pace with Casey. The rest of the guys were tiring out long before she did.

When she got to the top she assisted two people to safety and wasn’t afraid to ask for help. That’s a major concession to someone considered cocky. But she did what was best for the people in danger and in the end it won her some respect from the team. Though she still got ragged at the station for her cooking; only this time it was more playful and less hostile.

As for Severide, he’s in trouble. Otis knew he was planning something for Keeler and wanted it but Severide wouldn’t let him join up. So it could have been Severide and his buddies that made Keeler disappear into thin air or it could have been Otis acting on his own. Because someone played a part in Keeler car and phone getting found abandoned.