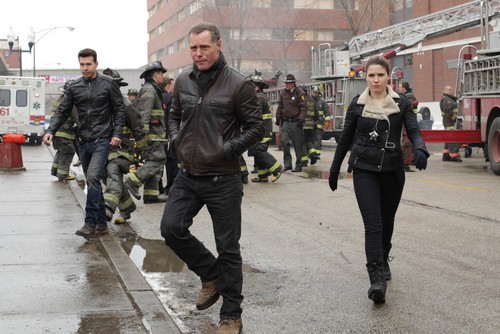 CHICAGO FIRE returns to NBC tonight for another episode that will keep you on the edge of your seat. In “A Dark Day” a major explosion occurs at Chicago Medical, where Casey and Dawson are volunteering at a charity run.

On tonight’s episode Lt. Casey (Jesse Spencer) and Dawson (Monica Raymund) volunteer to help at a charity run at Chicago Medical when a massive explosion sends Chicago into chaos. With one of their own missing in the blast, the firehouse is tested like never before.

Tonight’s episode begins with Chief Boden telling Hermann that he is acting lieutenant for the day because Casey and Dawson are out at a charity event. Hermann immediately objects, saying he needs time to plan something like this in advance. Boden is not having it and Hermann can tell, so he accepts the task and walks out.

At the charity event, Casey gets recruited to help set up the booth for Chicago PD (tonight is a crossover event with Chicago PD). Dawson goes into the hospital and asks for the race registration forms. She is off to go grab them so she can get back out to the event. No sooner does Dawson head down the hall to get the forms when a huge explosion is heard all around the area. At the event outside, a blast of fire can be seen and screams heard ringing through the air. Cars are on fire, the air is filled with smoke, and several dozens of people are hurts and bleeding.

Casey is initially knocked to the ground, but gets up to inspect the area. He sees a large hole in the hospital. He starts giving directions to those who are not hurt to help those who are. Casey takes charge giving directions on what everyone should be doing and asking for help. Firehouse 51 arrives on scene. They begin to assess the building and make their plan. As they talk about the next steps, Casey is asked where Dawson is. He realizes he hasn’t seen her after the blast and recalls she was in the hospital when the explosion occurred. Shay begins to help in a makeshift triage area.

Casey is feverishly looking for Gabby as the rest of the guys head in. Just as Shay is walking towards the ambulance, a huge piece of cement falls on her. She plays it off that she is okay when asked, but it is obvious from the bloody metal hanging out of it that it really hurt her. Cruz and Mills are looking for a car bomb in the parking structure while Casey is almost demolished by a falling ceiling. He moves just in time after Severide yells to him upon seeing the collapse beginning above him.

Leslie finally takes a moment and goes into a bathroom to assess her wound from the cement block that fell on her and it is worse than she thought. She has a huge open wound, but she covers up and heads back out. Just as she comes out she finds out that Gabby is missing. Meanwhile, Hermann is on the ladder rescuing a doctor from an upper floor with a completely blown off wall. Casey and Severide are looking for Gabby and any others under the rubble. They keep crawling in deeper and deeper with little to no visibility but still no sign of Dawson or anyone else…except for one person who is already dead. Finally after more searching, Gabby wakes up and hears the calls but cannot move and cannot scream. She tries to make noise by hitting two pipes together.

Just then Cruz and Mills find the second bomb in a car. They call Boden to let him know. He joins them at the car, breaks the window to remove the bomb to detonate it. When Boden realizes the gravity of the situation with this particular bomb, he tells Mills and Cruz to leave the area. They tell him there is no chance they are leaving. They realize the bomb can go off at any moment. Mills goes in the car and goes to work hoping the homemade, amateur bomb can be discharged. He does it! Mills saves the day because of the training he had and the bomb is no longer a threat.

Leslie is back outside and in some serious need of help as her open, gaping wound looks even worse. She re-bandages it and heads back out to help others. She goes out and talks to the little 9-year-old girl who is worried about her new friend Zoey who is in need of a liver transplant after her liver was crushed. She seems okay, just a few minor cuts, but as she talks she begins to have a seizure. The doctor who examines her realizes she has a brain hemorrhage and will be operated on immediately. Zoey, meanwhile, is still awaiting a new liver. Her time is running out.

As the crew is still actively working to pull everyone out from the wreckage, they receive the news from Casey that Gabby was found safe. Casey and Severide bring her to safety. Shortly after, the Commissioner shows up. He tells Boden he has been told Firehouse 51 was first on scene and saved dozens of lives. He tells Boden he and his men can fall back now, but Boden looks at his team and knows where they stand. He informs the Commissioner that they will be staying.

Meanwhile, in the last scene, Leslie collapses as a result of her injury. She is inside the hospital, however, and help is called for her immediately.

Join us tomorrow for the Chicago PD recap as the crossover will continue tomorrow as we find out how this story ends.