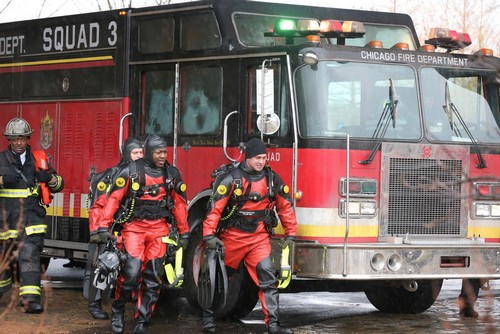 CHICAGO FIRE returns to NBC tonight for another episode that will keep you on the edge of your seat. In “One More Shot” Dawson prepares to retake the fireman’s exam. Meanwhile, Casey has an important discussion with Antonio; a new addition joins the squad; Shay deals with a surprise guest; and Boden makes a daring move.

On last week’s episode Lt. Casey (Jesse Spencer) and Dawson (Monica Raymund) volunteered to help at a charity run at Chicago Medical when a massive explosion sennt Chicago into chaos. With one of their own missing in the blast, the firehouse was tested like never before.  Did you watch last week’s episode?  If you missed it we have a full and detailed recap, right here for you.

Dawson prepares to retake the fireman’s exam, Meanwhile, Casey has an important discussion with Antonio; a new addition joins the squad; Shay deals with a surprise guest; and Boden makes a daring move.

Tonight’s episode begins with Gabby stressing over the fireman’s exam due to scheduling issues. She thinks she won’t be able to make it and it has already been stressing her out. Casey attempts to calm her fears and suggests she talk to Boden. He assures her she’ll make it to the test and kick the test’s ass!

Boden meets with his ex, who is also the mother of his child, as they plan how he will be involved in his life. Later, when Boden sees her again he suggests they get married and raise the child together. After she confirms that he is proposing marriage, she tells him no with a smile and walks off.

Mouch hands out flyers for his big yard sale as he reminds everyone to come to the big event. Just then, Severide introduces newcomer Rick Newhouse, who is replacing Mark, to the team. They all welcome him.

Meanwhile, Shay and Dawson talk and Shay shares how sad she will be if Dawson passes the test. Gabby assures her that she’ll still see her even if she passes the test. Their conversation is interrupted as the station sounds the alarm and Firehouse 51 is off. They arrive on scene and find a man in a tree cutting machine alongside the branches to be shredded up. He is pleading for them to get him out. As the guys begin working, Leslie and Gabby try to keep him calm and assess his physical condition. The guys take the heaving machine apart and finally get his legs released from the wood chipper.

A cocky firefighter from Firehouse 66 tells Casey that he heard his team may be getting Dawson if she passes the test. Casey plays it cool, but it is obvious the jerk, Tommy, is trying to get to him. After a few more passive-aggressive comments, he takes off when Casey is called because they need to head out to another call. Not before telling him they need to grab a beer sometime.

Mouch tells Newhouse about the yard sale and sees him going through paperwork. He inquires about it and find out he works as a process server for his brother on the side. Mouch is surprised by the fact that when Connie just walked in and talked to Newhouse, she was actually smiling as that is the first time he has seen her smile he says.

Shay tells Casey that she is not happy about keeping the big secret about the engagement. He tells her he has a tentative plan but it is not all figured out yet. Just then Shay is told by Gabby that she has a visitor waiting outside for her. At first Shay is visibly upset when she sees Devon waiting outside to talk to her. Shay immediately tells her to leave or she’ll call the police. Devon apologizes and begs to talk to her. Shay refuses any communication until she gets back from her everything that she had stolen. She storms off with Severide watching everything.

Mills walks into Boden’s office as he is watching a video of his son being born. Upon hearing the screams through the monitor, but not seeing what they were coming from, Mills get embarrassed and gets out of there ASAP.

Casey finds Gabby and tells him about the conversation he had with Tommy. She is interested to find out they may be hiring, but Casey warns her that women haven’t done well under their chief. Meanwhile, another call comes in that leaves the guys cold and wet as they attempt to save a man stuck in the water who is showing signs of hypothermia as the boat captain is completely passed out. He reeks of alcohol and they plan to test him with a Breathalyzer.

Later, Severide asks Shay what she plans to do about her Devon. She assures him she is not still carrying a torch for the girl, and simply wants back what was taken from her. Dawson is not exactly greeted with open arms by the lieutenant from 66 and tells her that it is not his first choice to hire a woman. When she hears this, she is upset and starts walking away, but comes back and tells him that if she passes the tests she’d like to be able to try to prove how good she is to him.

Moments later, Severide chastises Shay for agreeing to meet up with Devon. Otis comes in after hearing this and gets equally upset. They both cannot believe she’d meet with her after everything. They want want she stole back as well and Shay screams at them to cut her some slack because the only reason she is meeting with her is to get everything back for everyone.

At the bar, Shay awaits Devon and talks to Gabby as she waits sharing how she got such a bad vibe from the guys at Austin where Gabby may go work. Gabby assures her that she can deal with men, even those who aren’t so nice to her. Devon comes, gives her some money back along with some property. She also promises to get every penny back to Shay to make good on what she stole from Shay and her roommates.

Gabby goes to see the chief and inquires about the situation with the lieutenant and the girl that had a hard time working for him. She learns there was a relationship that went sour. Boden tells her that if she passes the test, there is no way she can work at 51. She hates to hear that news, but knows it is inevitable.

Casey is still getting ideas from Shay. Antonio comes to see him at the station. Antonio thinks he is there to talk about a party for Gabby, when Casey explains that he cannot wait for their parents’ approval and is asking him for permission to propose. At first, he pranks him into thinking he is really upset, but then Casey is later relieved to see he was joking and that his request has been granted!

Mills makes small talk with Newsome and asks him about his second job. Although Shay gives Severide some of his money back, he shares that he’s still not happy about it because of the way that Devon continually steps all over Shay. Mills congratulates Boden oon becoming a father and he responds that he is confused about how she denied his proposal. Mills gives him some good advice that makes him speak from the heart. Boden later goes to see his ex again, this time at work, and he finally lets his guard down and speaks from the heart, sharing how he truly feels. He once again proposes, getting down on bended knee. She is in awe and in front of her students, she says YES.

Mouch shares with Hermann some life experiences that will hopefully help him to doing his own purging and cleaning with his feelings so he’ll come to accept Newhouse. Seems like his talk may have worked as Hermann invites Newhouse to the bar to join him and the guys sometime after seeing him at the station. Meanwhile, Dawson and Shay arrive to help a woman who is eight months pregnant and in denial that she is in labor. As they walk down the stairs to get her to the ambulance, Dawson sees that the baby is coming when the woman has to stop and crouches down in pain. Big problem…if she stays to deliver the baby, she will miss her test. She delivers the baby in the hallway. Just then, Mills arrives with the guys and comes in to get her to her test. She gets suited up and seems ready for the big test. As she arrives late, she is instructed to come to the front and is told “You better be ready,” given no break to even settle in. She is first to perform her test, but looks like we won’t know the result until next week, so be sure to meet us here next week for the recap!