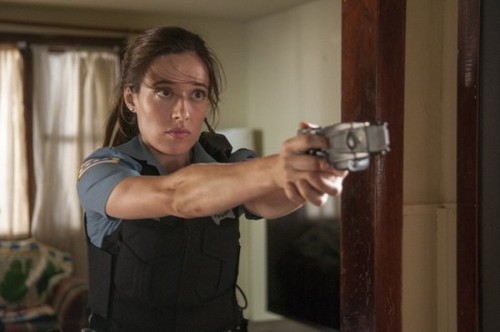 Tonight on NBC their new riveting police drama CHICAGO PD returns with an all new Wednesday October 1, season 2 episode 2 called, “Get My Cigarettes ” On tonight’s episode a friend of Voight’s is murdered by an apparent serial killer, and Ruzek, Antonio and Halstead help with the case. Elsewhere, Burgess and Roman investigate a string of break-ins.

On the last episode, in the season premiere, as the Sheldon Jin murder investigation moved forward, Voight (Jason Beghe) was under close watch by Internal Affairs but he was still in complete command of the intelligence unit. A routine undercover job became anything but when Voight’s SUV was T-boned while trailing an armored car carrying Ruzek (Patrick Flueger). At District, Burgess (Marina Squerciati) met her new partner, Sean Roman (Brian Geraghty) and tension was high from the start. Soon she realized there’s more to his story. After a long day, Lindsay payed a visit to someone she hasn’t seen in a very long time – her mom. Did you watch the last episode? If you missed it, we have a full and detailed recap right here for you.

On tonight’s episode, Intelligence begins to look into a string of murders where the victims have a dollar bill pinned to their chests. Thanks to some digging by Ruzek (Patrick Flueger), Voight (Jason Beghe) learns his friend was involved in some shady business dealings. Antonio (Jon Seda) and Halstead (Jesse Lee Soffer) follow-up on some leads that help focus in on the culprit and motives for the murders. Meanwhile, Burgess (Marina Squerciati) and Roman (Brian Geraghty) investigate a series of house break-ins and get some help from Desk Sgt. Platt (Amy Morton).

Tonight’s episode looks like it is going to be great and you won’t want to miss it, so be sure to tune in for our live coverage of NBC’s Chicago PD at 10:00 PM EST! While you wait for our recap hit the comments and let us know what you think of the show? In the meantime, check out the sneak peek of tonight’s episode below!

RECAP: Billy Fagen was but the first in a long line of murders. His killer had left behind a dollar bill pinned to his chest and so far a signature like that hasn’t showed up on anyone’s radar.

However soon after Billy’s murder there was another crime with the same MO. Dollar bill and everything. And that time, Voight knew the victim. He was a friend of his. One he had since childhood and from all appearances they still looked like they were close.

So this case has now become personal for him. And, at any other time, Lindsay would normally be right there for him to help with such a situation. Yet lately their relationship has become a tad bit frosty since he came clean about working with IA. And earlier after they had heard about the first murder – she had a made a random joke about the victim being a friend of his which later seemed cruel when an actual friend of his was targeted.

Lindsay tried to apologize for that and frankly Voight didn’t want to hear it. He know where his standing is with her and he didn’t want to pretend like everything was ok. It’s not. Lindsey is holding what he did against him and apparently every other cop that’s not in his division is on the same page with her.

When Voight tried to investigate the murders, he went to another cop to ask for help and was told he wasn’t even welcome at an old hangout of his. Although he didn’t technically rat on any cop – he’s still viewed with mistrust. And they’re not going to help him as long as they can help it.

As for Voight friend, the man wasn’t exactly what we might call clean. Nick had worked for an investment company and sometimes failed investments would be recuperated through certain means. So the first thing Voight had to do was ask his friend’s widow was if her husband had a “falling out” with his boss. She neither confirmed nor denied with him.

Hence Voight was without leads when they caught a lucky break with a third victim. The victim’s daughter saw the shooter up close and she was able to give them a clear sketch. And Jay had remembered where he saw the kid. Because the shooter is very much a kid.

One of the people Nick and his friends had put the screws in over the Couse of doing “business” had a son and that same son witnessed his father get beaten up. Then later the 17 year old went on to see his mother overdose because their financial problems were getting to be too much for her.

So the kid sought vengeance. Which he took to mean killing spree. He went on one of those and when he went after the big boss – he found out killing him wasn’t going to be easy. The kingpin fought back and the police arrived on the scene before things could escalate further.

Jay spoke to the teenager and managed to bring him without a fuss. But to do so he had to lie. Jay told him that the DA wasn’t going to charge him as an adult and any idiot could see the kid wasn’t going to get away with premeditated murder.

Jay had felt bad about but he knew deep down it was the only thing he could at the time. And honestly he had problems of his own to deal with. Someone had ransacked his place seeing as there’s a large bounty on his head. So he was going to ask Lindsey if he could stay with her when someone else took shots at him.

They were in a crowded bar and though Jay and Lindsay were alright – another friend of Jay’s got injured.

Lindsey had just arrived at the bar after a failed reunion with her mother so she was already not in a good mood to handle a shoot-out when a real one occurred. She was able to cover Jay while he dealt with his friend. Yet their hard work might be all for nothing.

Did the lovely Meg even survived the night?