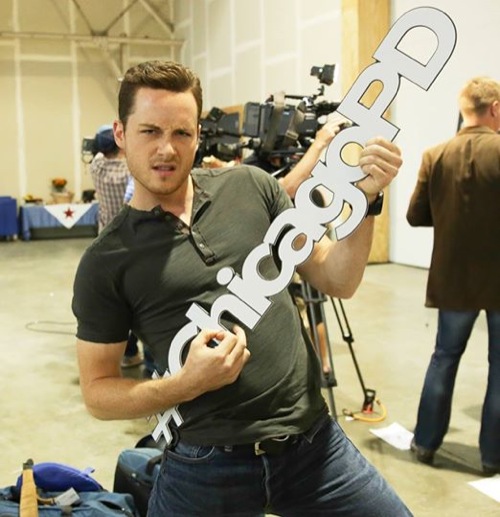 Tonight on NBC their new riveting police drama CHICAGO PD continues with an all new Wednesday October 8, season 2 episode 3 called, “The Weigh Station” On tonight’s episode a hit man tries to take out Halstead but accidentally kills a bartender instead. Meanwhile, Olinksy asks Bembenek to cancel the hit; Voight and his team go after the hired assassin; and Platt and Nadia come to an understanding.

On the last episode, Intelligence began to look into a string of murders where the victims had a dollar bill pinned to their chests. Thanks to some digging by Ruzek (Patrick Flueger), Voight (Jason Beghe) learned his friend were involved in some shady business dealings. Antonio (Jon Seda) and Halstead (Jesse Lee Soffer) followed-up on some leads that helped focus in on the culprit and motives for the murders. Meanwhile, Burgess (Marina Squerciati) and Roman (Brian Geraghty) investigated a series of house break-ins and get some help from Desk Sgt. Platt (Amy Morton). Did you watch the last episode? If you missed it, we have a full and detailed recap right here for you.

On tonight’s episode, the bounty on Halstead’s (Jesse Lee Soffer) head becomes a serious reality as an innocent bartender takes a bullet meant for him. Olinsky (Elias Koteas) tries to reason with Bembenek (guest star Jason Singer) to call off the hit, to no avail. Voight (Jason Beghe) and the team keep this investigation in-house to find the hired assassin. Meanwhile, after a tense interaction at district Platt (Amy Morton) and Nadia (guest star Stella Maeve) come to an understanding.

The bounty on Jay Halstead’s head had led to dire consequences. A group of men had decided one day to try their luck and so they came after him in a known cop bar. Luckily no cops were injured at the time but a pretty little barmaid Jay had befriend was injured.

Hence Jay is feeling guilty about the part he played in the whole mess and he wanted to be put on the case in finding the shooters. Thankfully he wasn’t. Voight had told him to stay put at the office and then basically had Kim and the new guy Sean watch him to make sure he stayed put.

But the case wasn’t easy investigating. Pretty much every crook in the city had heard about the bounty so really Jay’s head was up for grabs. And the guy he took a shot at Jay actually tried to do the job just so he could impress the tough older guys and move up the ranks.

Hence the squad has to do more than punish Jay’s shooter. They have to remove his name off the hit list and to do that – they had to talk to the man that named the price in the first place. However Oskar Bembenek didn’t want to let go of his grudge. As far as he’s concerned Jay killed his brother. The fact he had in the line of the duty makes no difference with him. He wants Jay dead and there was nothing Olinsky could say that would convince him otherwise.

The only way to get rid of the people bent on taking out Jay is to dangle Jay in front of them like a bait. Voight used a certain type of associate of his to make contact. And from all appearances the squad was going to get the help they need to remove the threat against one of their own. But something of course went wrong.

The man in charge of hunting Jay had found about the police’s plan so he had kidnapped the handler’s son in advance and made Jay’s fake into a real one. The plan was to use the handler to bait the big fish. The handler was supposed to pretend to be bringing Jay to his captors and when the plan was abruptly changed at the last minute – Jay’s friends were too far away to help.

So now the people intent on killing Jay don’t even have to injure third parties to get to him – his own people had mistakenly handed him over!

Although Jay was quick on his feet. He came to overpower his would be abductor and he made the original plan was still on. Hence they did catch the man in charge of the hit list and Jay ended up making a very impressive arrest.

At the end of the day the squad stood by Jay when he was down and even after the list had been taken of – they still took care of him. Olinsky paid another visit to Bembenek in prison and this time he informed the guy that he was going to be moved to general population. And do you know who else is in general population? A brother of one of Bembenek’s victims. The brother is allegedly a big guy and he apparently went off his rocker after his beloved sister was murdered.

So he probably won’t last more than five minutes being on the other end of someone’s justice!

And as for the girl that was in the ICU because of Bembenek, she’s going to be ok. The doctor said she pull through and will be on the mend in no time. Jay doesn’t have to have her death on his conscience.

In the end Lindsey went to her mother’s wedding and to the surprise of no one – her mother had did everything she could to make sure her new husband didn’t get the chance to speak to her daughter for long. But that experience taught her something. It made her see how lucky she was she had Voight in her life.

And that’s what she’s been trying to do with her own protégé. Just because they both had rough beginnings doesn’t mean they should be dismissed before they’re ever given a chance to succeed.