Chicago PD Recap “They’ll Have to Go Through Me”: Season 2 Episode 7 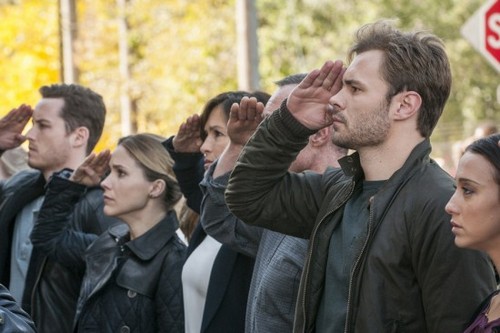 Tonight on NBC their riveting police drama Chicago PD continues with an all new Wednesday November 12, season 2 episode 7 called, “They’ll Have to Go Through Me.” On tonight’s episode New York’s SVU arrives to help take down a pedophile ring, as a link to foster care and child trafficking is investigated. Meanwhile, Burgess [Marina Squerciati] and Roman track down a shooter, and Platt [Amy Morton] honors a fallen cop.

On the last episode, following the death of a 10-year old girl the intelligence unit had one option to gain access to their suspect, go on the inside. Ruzek (Patrick Flueger) and Atwater (LaRoyce Hawkins) acted as inmates to work the case from the inside. Outside prison, Voight (Jason Beghe) and Olinsky (Elias Koteas) followed-up on a good lead to answer some questions about the shooting. Meanwhile, Burgess (Marina Squerciati) and Roman (Brian Geraghty) showed three boys around district thinking they were part of the Police Explorers program, only to realize that was not quite the case. Also starring Jon Seda, Jesse Lee Soffer, Sophia Bush and Amy Morton. Eric LaRay Harvey, Chris Agos and Chris Allen guest starred. Did you watch the last episode? If you missed it, we have a full and detailed recap right here for you.

On tonight’s episode as per the NBC synopsis, “part of the crossover event finds our intelligence unit joined by detectives from New York’s special victims unit to help solve the pedophile ring case. Ruzek (Patrick Flueger) and Det. Amaro (guest star Danny Pino) along with Halstead (Jesse Lee Soffer) and Antonio (Jon Seda) continue to hunt for the link to foster care and child trafficking. Meanwhile Burgess (Marina Squerciati) and Roman (Brian Geraghty) try to find the shooter from the hospital after using surveillance footage to identify him. Platt (Amy Morton) shows her deep respect for police and the dangerous work they do by honoring their fallen brother.”

Tonight’s episode of Chicago PD begins with a shooting at the hospital, the cop that was escorting the child pornography ring suspect was shot to death.  Jay, Olinsky, and Atwater arrive at the scene and are briefed on what happened.  They watch the security tape and see the shooter in a baseball cap.

Hank introduces Olivia and her team to his.  He briefs them on what happened in New York, Rollins explains that Bob Clinton was killed, but he did tell them that there was a ring leader.  Hank sends some patrol men out to try and ID the shooter at the hospital.  Ruzek reports that the fire victim was shoveling out money every month to a retirement home, and he is going to look in to it.  Erin’s mom shows up at the station – and Erin tells her she needs help finding Teddy.  She bought him a plane ticket to Chicago and he hasn’t shown up yet.

Nick and Ruzek head to the retirement home and find out that the fire victim Andrew Llewellyn was paying for a woman named Dorothy to stay there.  Dorothy says she has never heard of anyone named Andrew, she insists that Matilda Hughes – her daughter – pays her bill.  They run Matilda’s name and find out she works for children’s services.  Jay heads to Matilda’s apartment and the landlord lets him in, they find her shot to death on the floor.  They put two and two together and realize that Matilda was funneling kids through the system in to the child pornography ring, and in exchange they were paying her mom’s bill.  They head to social services and Matilda’s boss is shocked, he says that she had an abusive boyfriend named Gary Miller.

Erin and Rollins start going through Matilda’s case files and they find a picture of Teddy, they realize he was living with a foster family named the Whitings right before he went to New York.  Rollins and Erin head to Sam and Jill Whiting’s foster care home where they have two children reportedly living with them.  Rollins receives a phone call and reveals that Sam’s wife died nine years ago – and DSS had no idea and kept sending him kids.  Erin and Rollins let themselves in to the house and find Sam sitting in a chair with a gun, he cries that he is sick and doesn’t like to be the way he is, and then he shoots himself in the head and kills himself.

Roman and Burgess get lucky with the photo of the shooter, someone ID’s him as Todd – and he has past priors in child pornography.  They get an address for him and head to the apartment building.  They spot him making a run for it and Jay and Nick begin chasing him down on foot, Ruzek and Jay chase him up a set of stairs on to a roof where he runs and jumps to his death.

Rollins, Atwater, and Erin head back to Todd’s apartment to search it, they hear children crying for help inside.  They find Sam Whiting’s foster care daughter tied to a chair, she says that the boy that was with her was taken yesterday.  They head back to the police station and Erin tells Hank she is taking the girl home with her, she’s not putting her back in to the system until they find a family they can trust.  Hank agrees to try and make it happen and tells Trudy to get him the paperwork.

Hank heads to his office where Commander Fisher is waiting for him.  The Commander reveals that he wants “fresh eyes” on the case and he is upset that no one told him that one of the cops were related to the victim.  He tells Hank he has one more day on the case and if he doesn’t solve it he is handing the case over to the major crimes unit.

Hank receives a phone call from Olivia, he tells her he feels like he is “pedaling backwards” and he needs her help.  Olivia agrees to get on the next plane to Chicago and give him a hand.

The next day Erin gets a phone call from her mom who has tracked down Teddy and meets up with them for lunch.  Erin tells Teddy that she needs his help and tells him about the Whitings, Teddy whines that he doesn’t want to deal with this anymore.  Teddy tells her that they can’t be stopped, they’ve been doing this for fifteen years and getting away with it – and anyone that speaks up winds up dead.

Olivia arrives at Chicago PD, Hank tells her that they are going to lose the case at the end of the shift if they don’t solve it.  He hands over the forensic report he just got back and they get to work.

Erin brings Teddy back to the police station and tells him to sit at her desk while she talks to Hank.  Teddy looks at the board of pictures they are working on the case and freaks out.  He recognizes a picture of Matilda’s boss at social services and says that he is the one in charge of the trafficking ring.  They head to DSS and arrest Matilda’s boss and bring him in.  Hank throws him in a cell and demands to know where the little boy Chris is that was in the Whitings foster home.  After he hits him Olivia marches in and tells Hank that he can’t put his hands on him, she doesn’t want it to come back on her.  Olivia pleads with the suspect to tell her where Chris is and makes some head way.

Olivia and Hank’s team swarm an abandoned building and after breaking through the door they find Chris chained up to a bed and rescue him.  Once the case is closed, both teams rush back to the police station where the murdered police officer’s wife is picking up his belongings from his office – they all line up outside to salute her and see her off.

Erin thanks Teddy for all of his help, he is headed home with their mother to stay for awhile.  Olivia and Hank head out for drinks and toast to working together and closing the case.