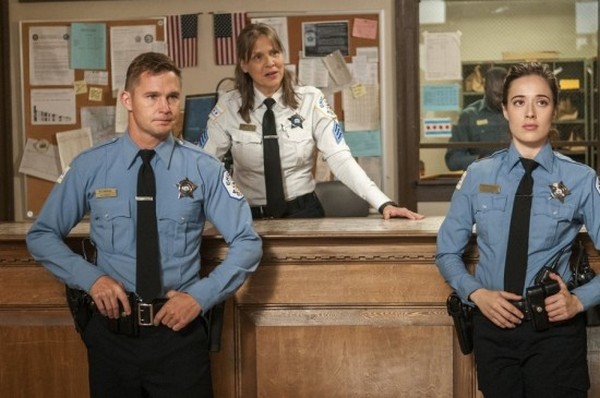 Tonight on NBC their riveting police drama Chicago PD continues with an all new Wednesday November 5, season 2 episode 6 called, “Prison Ball.” On tonight’s episode a 10-year-old girl is murdered, resulting in Ruzek [Patrick John Flueger] and Atwater going undercover as inmates to gain access to the suspect. Meanwhile, Burgess [Marina Squerciati] and Roman serve as guides to three boys who are supposedly part of the Police Explorers program.

On the last episode, while trying to help out Olive (guest star Caroline Neff) Voight (Jason Beghe) was attacked and taken. When he doesn’t show for work the team got suspicious and began investigating. Ruzek (Patrick Flueger) and Atwater (LaRoyce Hawkins) proved they do belong on the team when they demonstrated smarts and savvy tracking down a lead that would hopefully bring them to Voight. Meanwhile Burgess (Marina Squerciati) and Roman (Brian Geraghty) are trying to track down a girl who had ran off with a police badge. Jon Seda, Jesse Lee Soffer, Sophia Bush, Elias Koteas and Amy Morton also star. Did you watch the last episode? If you missed it, we have a full and detailed recap right here for you.

On tonight’s episode as per the NBC synopsis, Following the death of a 10-year old girl the intelligence unit have one option to gain access to their suspect, go on the inside. Ruzek (Patrick Flueger) and Atwater (LaRoyce Hawkins) act as inmates to work the case from the inside. Outside prison, Voight (Jason Beghe) and Olinsky (Elias Koteas) follow-up on a good lead to answer some questions about the shooting. Meanwhile, Burgess (Marina Squerciati) and Roman (Brian Geraghty) show three boys around district thinking they are part of the Police Explorers program, only to realize that’s not quite the case. Also starring Jon Seda, Jesse Lee Soffer, Sophia Bush and Amy Morton. Eric LaRay Harvey, Chris Agos and Chris Allen guest star.

Tonight’s episode of Chicago PD begins with Kim playing video games with Atwater and Vanessa.  He receives a phone call and says he has to go – Kim agrees to stay behind and watch Vanessa.

Chicago PD arrives at a murder scene, a woman named Maya was shot twice in the head.  They learn that she was scheduled to testify in a theft case in a few days.  Erin is disgusted when she removes the sheet and realizes that she is only ten years old.  Dawson announces that this was a message to the neighborhood and this is what happens to anyone who snitches.  Maya’s mother arrives and is hysterical and Atwater comforts her and promises they will find whoever did it.

The number one suspect in the case is a high-school basketball player named Grant who is on the fasttrack to pro ball.  If Maya testified against him, he’d never get to the NBA.  But, he has an alibi, he was playing in a basketball tournament out of town.  Hank says that Grant’s uncle is a notorious gun runner named Devon Tucker and may have orchestrated the hit, but he is currently in jail on a federal weapon’s charge.

Hank and Olinsky head to the prison to talk to Tucker, but the DA says that he is their only lead in a major case and he is “off limits.”  They had back to the precinct and Atwater is furious, he says that Maya was killed on “his streets” and is the same age as his sister – he wants to find her killer.  Hank agrees but says that no one can know – and he calls the warden.  The next day Atwater arrives at the prison undercover as an inmate.

Roman and Burgess head in to work and learn that they have had three kids assigned to them as Police Explorers.  Roman is pumped  – and seems more excited about it than the kids are.

Hank briefs the commander and reveals that he sent two cops undercover as inmates with recorders to try and get Tucker on tape confessing to putting a hit out on Maya’s murder.  Erin corners Jay and asks him what he knows about Steve Cot.  She reveals that he is putting together a task force and he wants her on it – she wants to keep it on the down low though.  Before they can discuss it any further Olinsky walks up and they stop talking.  Dawson has gone undercover at the prison as well as a guard to keep an eye on the Chicago PD officers.

Maya’s mother comes in to the precinct and Erin sits down with her – she reassures her they are trying to find a way to link Maya’s death to James Grant.  Erin insists Grant won’t get away with it, but Maya’s mom says she doesn’t believe her and has to go home and make funeral arrangements.

Grant comes in for questioning and Hank sits down with him – he lawyers up and refuses to answer any questions.  Hank threatens him that he is going to prove that he is responsible for Maya’s murder.

Jay does some digging and learns that there was a hit-and-run car crash reported half a block away from where Maya was murdered just a few minutes after she was shot.  Hank tells his team to get on it ASAP.  Jay and Erin try to track down the driver of the car, but their only lead reveals her car has been towed and has been in the lot for the past two days.

Olinsky bumps in to Burgess and Roman in the hallway with their Police Explorers.  Roman gives Olinsky attitude and he demands to know what Roman’s problem is.  He explains that years ago un an undercover sting his partner and him were both shot and Olinsky was there – Roman’s partner bled out and died because Olinsky didn’t help him and thought it was more important to chase after the shooter.  While Roman is having a meltdown, he loses the Police Explorers.  Burgess and Roman learn that the Explorers were actually juvenile delinquents, and they stole the commander’s squad car.

Olinsky and Hank head to the impound lot to try and figure out how an impounded SUV was involved in a hit-and-run accident.  After they confirm the car is still on the lot, they ask the lot attendant for records as to who drove it.  He says he is going to go get his manager and then tries to make a run for it, Olinsky and Hank chase him down.

In prison Atwater starts a fight so that he can get put in protective custody where Devon Tucker is being held.  At the impound lot, the attendant confesses that he rented a car or two out to help guys impress girls on dates.

Burgess and Roman locate the Commander’s car – it’s parked in front of a store that has just been ransacked by the boys.  The store owner’s husband caught them and is holding them in the back room.  Roman lectures them that they will never be real Police Explorers and says that he will throw them back in juvey.

The lot attendant confesses that he lent the car out to a man named Omar Martel, who just left prison and was locked up with Devon Tucker.  Hank and his team head to Omar’s house and kick in the door, they find him upstairs in his underwear rolling a joint.  Hank pins him on the floor and Omar laughs that they have nothing on him.

At the prison Atwater pays Devon a visit and says that he has a message from Omar – he wants more money or else he is going to rat out James Grant.  Devon gives himself up and starts talking about how much money he already paid Omar to kill Maya.  While Devon is talking one of his henchmen run in and say that Atwater is a cop.  Atwater is trapped in a cell with two men with shanks.  He manages to fight them both off and is punching in Devon’s face when Antonio rushes in and stops him.
Roman cuts the three juveniles loose and tells them that everyone gets one break, even if they don’t deserve it.  He tells them that if they ever want to join the Explorers for real, then they can give him a call.  One of the boys stay behind and ask when Explorers is – and Roman tells him to come back on Saturday morning.

Olinsky and Hank book and charge James Grant and put him on a truck to the prison.  Atwater heads to the precinct and informs Maya’s mom that they got Tucker, Grant, and the shooter – she sobs and hugs him.