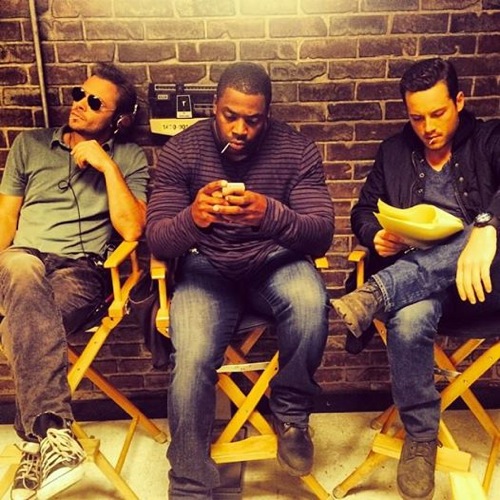 Tonight on NBC their riveting police drama Chicago PD continues with an all new Wednesday October 22, season 2 episode 5 called, “An Honest woman.” On tonight’s episode the team springs into action after Voight is abducted, and Ruzek and Atwater track down a lead that may lead to a break in the case. Meanwhile, Burgess and Roman look for a girl who stole a police badge.

On the last episode, two teenage girls had gone missing and the team know the clock was ticking to find them. Halstead (Jesse Lee Soffer), Antonio (Jon Seda) and Lindsay (Sophia Bush) investigated a tenement which gave them a much needed lead. Voight (Jason Beghe) brought the father of one of the girls to district in order to get some honest answers. Meanwhile, Platt (Amy Morton) put Roman (Brian Geraghty) and Burgess (Marina Squerciati) on gun buy-back duty where they asked questions when they weren’t supposed to. Patrick Flueger, Elias Koteas and LaRoyce Hawkins also star. Did you watch the last episode? If you missed it, we have a full and detailed recap right here for you.

On tonight’s episode, while trying to help out Olive (guest star Caroline Neff) Voight (Jason Beghe) is attacked and taken. When he doesn’t show for work the team gets suspicious and begin investigating. Ruzek (Patrick Flueger) and Atwater (LaRoyce Hawkins) prove they do belong on the team when they demonstrate smarts and savvy tracking down a lead that will hopefully bring them to Voight. Meanwhile Burgess (Marina Squerciati) and Roman (Brian Geraghty) are trying to track down a girl who has run off with a police badge. Jon Seda, Jesse Lee Soffer, Sophia Bush, Elias Koteas and Amy Morton also star.

Voight was on the brink of learning about future his grandchild’s mother when suddenly he was attacked by two thugs who broke into his home.

The men grabbed him and Olive. So there wasn’t anyone around when Voight’s own squad came by looking for him. Thankfully, because it so was unlike him not to show up at work, two of his own went to the house. And after they saw the crime scene that awaited them there – they called it in.

The squad wants to keep the kidnapping in house so they aren’t reporting it through the proper channels. Although the team got lucky with their criminals. It seems the team is dealing with a rather of a stupid bunch. They hadn’t even checked Voight’s place for surveillance cameras. Hence the detectives were able to identify the kidnappers right off the bat.

Then for their second mistake, the kidnappers used their cell phone that easily pinged off the nearest tower!

By time the squad located them, the criminals had already fled. But they got what they came for. They had heard about Voight’s safe and by threatening Olive they got Voight to give them code to open it. So someone has Voight’s money and it’s all Olive’s fault.

Earlier, she had ran her mouth to an old friend of hers and confessed that Justin had told her about his father’s secret stash. Then later her friend went behind her back and betrayed her. The friend ended up telling other people about Voight money. And one of these guys approached Olive with a knife. He cut her but not deep enough to actually hurt the baby. Just so she knew he was prepared to cut her child out of her if she didn’t help them set up Voight.

However the guys were never going to let her live afterwards. Once they were done using her to manipulate Voight– they were going to kill her. So now Voight has no other choice but to pursue them. He doesn’t what those kind of people still around. Especially when its grandchild’s life riding on the line.

Voight wanted to go off all half-cock on his own. But Lindsey told him he needed his team for this. When his family is threatened – he needs his team!

So whatever Voight wanted to do next, he had to with all of them backing him up. And what he chose to do was torture a seemingly cooperative prisoner. One of his kidnappers had come by the precinct. He wanted to turn himself in and out of goodwill he was even prepared to return his cut of the money.

Apparently, his partner is so dangerous that he’s also scared of him. And that’s why he wanted to be safely locked up in a precinct somewhere. But Voight wasn’t going to allow that. So first, he took his prisoner for a ride to an empty field. Voight wanted to know two things. One, if the other man was being sincere with him about turning on his partner and the second thing he wanted was some reassurance about Olive. He needed to know if she was secretly in on the robbery. She wasn’t.

When he got the news, Voight decided to use his prisoner to lure in the second kidnapper. He wanted to remove all threats towards his family and the only way to do that was to take care of the second man. Yet when the opportunity presented itself – Voight couldn’t do it.

He merely brought him in on charges. And now it’s up to the penal system to do with him whatever they want!

Justin, who was left in the dark about Olive, was told to return home. He simply wasn’t told why he had to come back. But when he did learn he was going to be expecting a baby – he was excited. Justin had turned his life around since he left. He’s thinking about going back to school and he wants to be a family with Olive and the baby.

So his father gave him his mother’s ring. In case he wanted to start a family of his own the honest way.

As for Dawson’s newest job in private security, he later learn his boss could be a tad oversensitive about everything involving his wife. Dawson was told to watch him but he may have to start paying more attention to the husband. He doesn’t seem like that safe of a guy to be around.