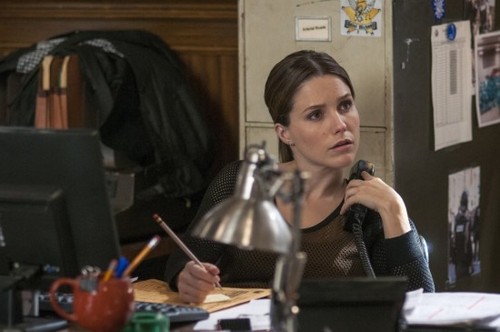 Tonight on NBC their new riveting police drama CHICAGO PD airs with a new episode called, “The Price We Pay.”  On tonight’s episode at the precinct Ruzek (Patrick Flueger) helps Burgess (Marina Squerciati) get back at desk sergeant Platt (guest star Amy Morton).  Did you watch last week’s episode?  We did and we recapped it here for you.

On last week’s episode Voight and Antonio enlisted the help of agents at the Special Victims Unit in New York, Fin and Rollins, to help track down the culprit of a series of rape/murders. Burgess had an opportunity to prove herself to Intelligence. Elsewhere Lindsay enlisted the help of Halstead to act as her date for her high school reunion to get back at an old rival. Elias Koteas, Patrick Flueger, LaRoyce Hawkins and Archie Kao also starred. Ice T, Kelli Giddish and David Eigenberg guest starred.

RECAP: Erin has Justin in her home; Jason is telling explaining to her how he got blood on his hands. Justin starts freaking out saying he shouldn’t of gotten her involved and leave. It cuts to Kevin who sees a man walking his dog; they found a body out on the side of the road. Hank walks up to a woman and sits down at a table with her, turns out a body has been found and it looks like it’s a homicide. The man who died was a long-time rival. One of the men in the image she shows Hank, is a man who recently got out of prison. Hank says he’ll take the case and work on it, that he’ll get back to her. Hank goes to talk to a man asking about what he’s doing, that he can’t repay his debt for him and can’t look the other way for him this time. A man named Frank his rival ended up dying last night, he wants to know where his nephew is now and says that his survival will depend on how he chooses to answer. Hank catches the man’s nephew and asks what he did to Frank, the nephew says that he could have done it or not; then mentions that Justin could have been involved with the case. Hank ends up walking away, feeling extremely pissed off and frustrated.

Antonio is with his wife and son in the car, they’re dropping him off at work. Hank is outside and sees Antonio, he waves at his family as they drive off. Hank and Antonio talk to each other about his family, Hank says that Antonio is a lucky man. The secretary tells Kevin as he arrives into HQ he needs to get a new picture for his I.D. and then says that Kim needs one to. Though Kim is interrupted because Adam wants to talk to her, seems that he didn’t and just wanted to help Kim with getting out of that I.D. photo. Erin tells Hank about Justin getting into a bar fight of some sort, this proves of what the man’s nephew said about his son being involved with Franks murder. Hank is briefing his team on the case, then they go out with their lead. Jay and Erin are in their squad car, Jay says he doesn’t want to be used by her to get back at her father figure or anything. They arrive at the scene of the crime where Frank was murdered, they ask for where the body was, but forensics took it already. Erin sees a camera near the murder scene and there could be useful footage there. Antonio talks to Hank, he says that the social network that Hank is with isn’t all that great. He says that Jin didn’t mention anything to him; Hank tells him that Jin has done many things for him and not to worry.

Hank is asking to talk to Justin, but it looks like he hasn’t showed up to three shifts. Hank is getting worried because he has no idea what’s going on with his son. Kevin is worried about his I.D. photo he recently got, the sergeant at the front desk tells him not to worry it’s an amazing photo. Adam is talk to Alvin trying to see if going to pawn shops would be a good idea, Alvin doesn’t really listen. Adam says that Alvin is being miserable, Adam then tells him he believes the weapon was something that could be bought at a pawn shop, Alvin then says they’re going to a pawn shop. Erin goes to Jin to check out the camera at the scene of the crime, to see if there’s any footage on it. Jay and Erin talk to a construction worker to use some footage from the camera, the construction worker says that there’s nothing he can do that a company in India owns them and that they should call it. Erin gets her I.D. photo taken and the Sergeant says it’s a perfect photo. Kim then gets her photo taken, though she feels like it was taken properly and wants another. Though the sergeant turns her down and says she can’t do that. Hank says that he’s given the files to homicide and that there’s nothing he can do. Antonio meets up with a woman; she talks about how Hank helps out with taking down heavy hitters. She says that Antonio is a good detective, that he can solve the murder case that Hank decided to blow off. Hank looks at the photo, and notices there’s something that Hank didn’t mention; that someone they know is a suspect. The woman tells Antonio to choose a side.

Hank says he’s giving the case to homicide to his team, Antonio comes in and interrupts saying that Joe is involved with case. They believe that Calano killed Frank; though a driver was there with him and it looks like that it could have been Justin. Hank wants to talk to Antonio in his office, they got to his office. Antonio says that he was instructed to run the investigation, Hank says it sounds like he knows what he’s doing and wants to see where this will lead. Hank and Erin are following one of the suspects; Hank then tells Erin that Justin was the driver at the murder. He mentions how he visited the CTI and he wasn’t there for three weeks. Antonio asks if Alvin and Adam have eyes on him, they reply that they do. Hank and Erin are following; they see their suspect headed on foot to a store. Hank sees Calano; he begins to chase him on foot. Antonio gets to the chase and begins to go after them, Hank chased Calano and told him to keep going, letting him get away. Hank tells them all that he lost him; the others look around if he’s near and then go back. Antonio looks at Hank, knowing that he let him go.

Antonio talks to Hank and wants to know what’s going on; Hank tells him he doesn’t want him barking at him. Antonio says that he wants to solve this case that Hank will go down with the case if he needs to. Hank talks about how his son and the unit saved his son when he got kidnapped, Antonio walks away. Erin walks in and tells Hank that the company in India gave them the camera footage, now Hank and Erin are with Jin looking at the footage. Hank tells Jin they’ll call him if they need him, Jin gets the message and leaves. Hank and Erin watch the footage; in the car they see that Justin is in fact the driver, Hank looks very pissed off knowing that his son is an accomplice to a murder. Hank walks out of the room, Antonio sees him walk out. Antonio asks Alvin about Hank since they’ve known each other for a long time. Alvin tells Antonio not to put him in a situation where he needs to make a choice, because he won’t make one. Antonio is getting his picture taking; the sergeant who’s the receptionist tells him that Hanks is a good cop. Erin talks to Justin about the murder, Justin says that he didn’t know that someone was going to get murdered. He was asked to help move the body at gun point, Justin says that he needs to run because he’s a dead man. Erin tells him to get in her car, Hank intercepts Calano’s nephew who was about to wait for Ross and shoot him. He tells Hank that his son Justin will get shanked behind bars, and that he should help him in order to make sure it doesn’t happen. Erin has Justin in the interrogation room; Hank hears about this and goes to check if it’s true. Hank sees his son in the interrogation room and looks severely pissed off, he walks up to Antonio and yells at him demanding to know why his son is in there.

Antonio say that Hank has a problem with internal affairs, he knows that his son isn’t any problem as far as he knows he had nothing to do with it. That Calano is the man that they’re after at the moment, Hank looks shocked and relieved. Hank goes and gives his son a hug in the interrogation room, they stay like that for a while until Hank says they should take a ride. Kim comes up to the receptionist saying she’ll want retake the photos, she shows old photos of the sergeant of when she was a child and says she’ll make their newsletter more interesting with them. Erin comes up and says that Jin never got the video from India, Jin says the one he deleted two hours ago, he never received it. Hank has a moment with his son talking about the past, dropping his son off to join the military. Hank then drives away. Adam is at a bar with a women, she asks him how was his day and he replies that it’s fine. She says she’ll ask her partner about his day instead, Alvin was invited to join them. The woman asks Alvin about how Adam is doing, he says that Adam is doing better than he did maybe better than he’s doing now. Jay asks about what’s going on and about the bet that he lost, they’ll be going to dinner. Erin asks to keep it professional that it’ll be better that way. Jin walks up and tells Antonio that a body has been found at the river. Antonio gets up and heads to the river, Hank’s already there and sees the corpse of Calano get pulled out of the river.