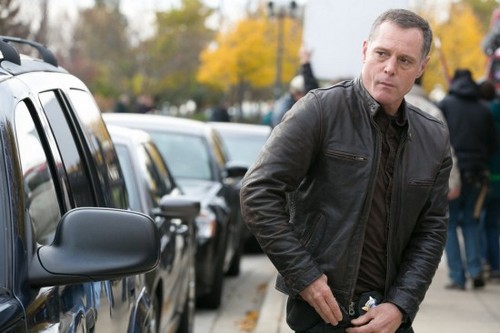 Tonight on NBC their new riveting police drama CHICAGO PD airs with a new episode called, “Conventions.”  On tonight’s episode Lindsay (Sophia Bush) enlists the help of Halstead (Jesse Lee Sopher) to act as her date for her high school reunion to get back at an old rival.  Did you watch last week’s episode?  We did and we recapped it here for you.

On last week’s episode Atwater and Burgess were given a new patrol car, but were challenged with keeping it brand new. A run in with a psychotic woman led the Intelligence Unit to discover a drug smuggling operation which had put several girl’s lives in peril. Voight’s  overprotective act with Lindsay led her right where he didn’t want as she also helped to keep Justin out of trouble. Meanwhile on stakeout, things got tense between Olinsky and Ruzek as Olinski tried to teach him the finer points of surveillance.

On tonight’s episode Voight (Jason Beghe) and Antonio (Jon Seda) enlist the help of agents at the Special Victims Unit in New York, Fin (guest star Ice T) and Rollins (guest star Kelli Giddish), to help track down the culprit of a series of rape/murders. Burgess (Marina Squerciati) has an opportunity to prove herself to Intelligence. Elsewhere Lindsay (Sophia Bush) enlists the help of Halstead (Jesse Lee Sopher) to act as her date for her high school reunion to get back at an old rival. Elias Koteas, Patrick Flueger, LaRoyce Hawkins and Archie Kao also star. Ice T, Kelli Giddish and David Eigenberg guest star.

RECAP:Erin is at the airport and she bumps into Bethany who’s recently gotten married, Bethany tells Erin that they’ve all been talking to her; I assume “they” are her old friends from school. Erin says that she’s become a cop, Bethany is surprised and tells her that she should come to the reunion. Justin is working out by himself, his dad walks in to talk to him and see if everything is all right with him. Justin plays it cool, and continues to work out. His dad then makes a phone call. Hank goes to a crime scene to check out a recent murder that’s happened.

Alvin and Jay talk about what they used to do in the past, Jay makes a joke about Alvin’s asking him if he was in World War II. Hank briefs how two young women have died and went through something horrific, a male with a white hoodie was seen on the footage of a camera following the two women before they died. Kim goes upstairs into the office room, to see no one is there; she takes a look at the board with the pictures of the murdered victims. Erin is on a run, Sheldon asks if he can call Hank by his name and tells him he’s been reading a book lately that says it’s good to call people by their names due to it bringing them closer. Hank doesn’t seem to care. Everyone is in disguise looking for a man in a hoodie, Jay finds a man in a hoodie who tried to attack a woman. Jay is in pursuit of the man and he easily catches the man. Jay has got the offender in custody.

Turns out the man in the hoodie isn’t her person they were looking for, he’s only a pickpocket; though this is only an assumption they decide to bring him in. The pick pocket is being interrogated he says that he would never hurt a woman, Antonio is asking for the pick pocket to help him find the man who murdered the women. He asks the pick pocket to close his eyes and think, he says that there was a man that he saw who looked suspicious; he was either a criminal or a police officer, but he had too nice of a watch to be a cop. Platt wants to go see Hank, the receptionist doesn’t seem to care and tells Hank to go meet with them. Pratt and his team introduce themselves to the Chicago team. Pratt tells them that there’s got to be a pattern first a murder in New York and now Chicago. Sheldon is using his laptop and has found forty five guys that could be the murderer, they show the pictures of the men to the pick pocket and he notices one of the men. Erin and Jay are talking to each other, Erin mentions how he has no nice suits and he retorts that he believes he does. Jay and Erin meet up with Jeffery who’s the man who suspected to be the murderer. They ask to interrogate him, they ask him how long he’s been here and he’s been here for five day. Jay asks if he’s been to the river walk, Jeffery asks if they have a laptop here to show them a speech that’s called Don’t Talk To Cops. They ask him again and he doesn’t answer, Jay and Erin hear that there’s been another rape down by the River Walk, but this time the victim lived.

Antonio and Erin show up at the hospital to meet with the victim at the River Walk, they ask for her to tell them what happened. The woman tells them that she’s on the soccer team at school; that she walks across the River Walk in order to get home. A man from with a brown hoodie and mask grabbed her and ended up raping her, they ask if she saw anything significant about the man. She mentions he’s the same height as Antonio, with brown eyes, dirty blonde hair and is a bit heavier. Erin asks if she scratched the man by any chance, turns she shoved her thumb in his right eye. The woman tells them that the rapist didn’t break her and she wanted him to know that. Erin and Antonio tell Hank that it can’t be Jeffery, since the rape went down while he was being interrogated.

They’re all back at the office wondering how Jeffry and Neal know each other, they assume that the two probably met on a chat site on the internet. They believe that the one who’s the dominate one out of the two is Jeffry, that he’s the one pulling the strings. Hank goes down to confront Jeffry with Adam and Antonio, Jeffry starts playing innocent. Hank tells Adam and Antonio to take a walk, Hank opens the cell and talks to Jeffry. Hank slaps Jeffry in the face and then handcuffs him to the cell. He asks who would rape a woman, but also take an ear off of them also. Hank takes out a knife and says he will cut off Jeffry’s ear if he doesn’t talk. Jeffry breaks and tells Hank that he’s supposed to meet Neal somewhere. Antonio, Alvin, Erin, Adam, Jay and Hank are going to go to the pier where Neal and Jeffry were supposed to meet up at. All of them are looking around for where Neal is, Adam finds a man in a hoodie and it’s Neal, Neal begins to run as fast he can away and Adam chases after him. Neal takes a woman hostage and says that he’ll kill her, Adam has his gun aimed at Neal.

Adam tells him not to do anything drastic, Neal tells him to put the gun down. Adam listens and puts the gun down, he tells Neal that Jeffry told him where he was. Adam wants to make a deal with Neal, that if he lets the girl go he will let Neal go. Jay and Alvin set up a sniping point on a boat nearby, Alvin takes the shot and kills Neal saving the woman. Adam tells the woman not to look at Neal’s body and tries to calm her. The rest of the team show up to Neal’s body. Erin goes back to the hospital to meet with the young girl who was raped, she tells her that they got Neal. The girl looks very relieved that they got him, she begins to cry as Erin hugs her. Adam and Alvin are at a bar with the cops from New York. Jay and Erin are out dressed up getting ready to go to the reunion, they find Erin’s friends getting out of a limo screaming. Erin doesn’t know why she’s here, instead her and Jay go to drink together. Erin talks about the past and how she used to hang out the those women, but when people found out that Erin’s mother is a drug addict and father was in jail she could see that her friends weren’t her real friends. Jay holds Erin’s hand, she says that they can’t Jay tells her that he should get her home. Hank is having a late night at the office working, he ends up calling Justin telling him he’s wrapping up work and for him to call back. Erin walks into her building, as she does she hears a knocking on the door turns out that it’s Jason. Jason is out of breath and says he didn’t want to do it, but he had to; showing Erin that his hands are covered in blood.