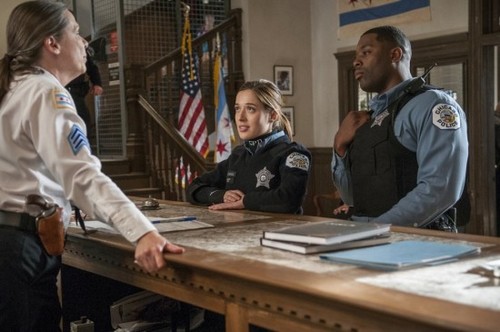 Tonight on NBC their new riveting police drama CHICAGO PD airs with a new episode called, “Thirty Balloons.”  On tonight’s episode things get tense between Olinsky (Elias Koteas) and Ruzek (Patrick Flueger) as Olinski tries to teach him the finer points of surveillance.  Did you watch last week’s episode?  We did and we recapped it here for you.

On last week’s episode more was learned about Halstead’s dislike of the Rodiger family and it’s family relationships all around as Olinsky showed a paternal side with his daughter Lexi in an attempt to protect her and as Voight’s trying to help his son who had recently been released from jail. Meanwhile the Intelligence Unit investigated a counterfeiting operation after discovering some high end cloth-like paper. Sergeant Platt sent Atwater and Burgess to arrest a hoarder where they discovered more than just clutter. Jon Seda, Sophia Bush, Patrick Flueger and Archie Kao also starred. Amy Morton, Stella Maeve and Josh Segarra guest starred.

On tonight’s episode Atwater (LaRoyce Hawkins) and Burgess (Marina Squerciati) are given a new patrol car, but are challenged with keeping it brand new. A run in with a psychotic woman leads the Intelligence Unit to discover a drug smuggling operation which has put several girl’s lives in peril. Voight’s (Jason Beghe) overprotective act with Lindsay (Sophia Bush) leads her right where he doesn’t want as she also helps to keep Justin out of trouble. Meanwhile on stakeout, things get tense between Olinsky (Elias Koteas) and Ruzek (Patrick Flueger) as Olinski tries to teach him the finer points of surveillance. Jon Seda, Jesse Lee Soffer and Archie Kao also star. Robin Weigert, Amy Morton, Josh Segarra and Joe Reegan guest star.

Tonight’s episode of Chicago PD opens with Antonio and Jay working out at the gym. Erin brings Justin by and he introduces him Antonia and Jay, she wants them to help her keep Justin out of trouble.

Hank arrives at a crime scene, three men have been arrested for selling drugs. Hank knows one of the men, he tells the arresting officer to cut him loose and write him out of the report. Hank takes the man around the corner, and the man, Maurice tries to pay him $2,000.00 for getting him off the hook. Hank punches him in the face, and tells him he needs to pay him $5,000.00 by the end of the day.

Adam’s wife drops him off at the precinct, and she reminds him he has to be at dinner tonight with her parents. Olinsky sees Adam and his wife out front, and he introduces himself to her as Adam’s partner.

Burgress and Atwater are awarded a shiny new patrol car, but they can’t even get a scratch on it because it is being used in show next week. A woman flags them down on the street. A young teen girl is wandering down the street in a bikini, covered in blood. She attacks Atwater and Burgress has to shock her with a tazer. The unidentified girl is taken to Chicago hospital, and they discover that she has thirty balloons full of cocaine in her stomach. The doctor reveals that they had to do surgery on the girl because one of the balloons broke open and dissolved in her stomach. The cocaine is 89% pure, which means she had about $50,000.00 in her stomach.

Burgress and Atwater are in trouble. Their brand new shiny patrol car is damaged for the girl, Amber Morris, attacking Atwater. They take the patrol car to a shady garage to get it fixed before they get in trouble. They have to come up with $500 to pay the mechanic though.

Amber Morris, the unconscious drug mule, has been linked to a group of college students who just returned to Chicago from Cabo, Mexico. Hank and his team head to the campus to find the other girls that were photographed at the airport with Amber. All three of the girls are gone from their rooms, they find their RA beaten up and chained to a heater. She says two white males took all three of the girls, and the girls were really sick.

Erin and Antonio head to the hospital to interrogate Amber Morris. Amber says she was transporting drugs for her boyfriend and his brother, Shawn and Brendon. Shawn and Brendon were supposed to pay her and her friends $5,000.00 each. She says they hang out at a tattoo parlor.

Amber Morris’s Mom arrives at the precinct and Jay questions her. Amber’s Mom is convinced that her daughter is innocent, she thinks that someone forced Amber to swallow those bags of cocaine. Jay tells her Mom as long as she is cooperative in their investigation, they will try to keep Amber out of jail.

Olinsky and Adam head to the tattoo parlor to stake out and see if Brendon and Shawn show up with the kidnapped girls. Olinsky is annoyed because Shawn is more worried about his wedding than looking for the Collins brothers.

Erin pulls Hank aside and tells him he has had enough of the “over-protective father thing.” Hank says he isn’t worried about her, he is worried about Jay, she has left a string of broken hearts since she was 15, and he doesn’t need Jay distracted.

Hank and has team got a lead on the Collins’ black van. The van is on the move, Hank, Erin, and Jay end up in a high speed pursuit, they are trying to “box the van in.” Unfortunately, the driver, Brendon Collins ends up getting T-Boned by a dump-truck while they are chasing him. They call an ambulance for Brendon, even though they are sure he is dead. They check the back of the van, but the kidnapped girls are nowhere in sight.

Olinsky is annoyed with Adam on the stake out. Adam tries to call his wife Wendy, but Olinsky throws his phone off the roof they are sitting on.

Erin runs into Justin outside, he is waiting for his wallet, he left it in her car. Erin is annoyed because Justin didn’t go to the CTA training that Hank set up for him. Justin says he is “cooking up something else.”

Hank and Antonio head to a bar, where Brendon and Shawn’s Uncle is playing a game of pool. Uncle Collins isn’t very cooperative, so Hank pulls a gun on him and tells him to give him the address of the stash-house before he blows his brains out. Uncle Collins hands over the address, and Hank and his team head to the empty warehouse. They find Megan Benson dead on a table, covered in blood. Someone cut her stomach open, to get to the cocaine. There is no sign of the other two girls.

They track Shawn’s phone records, and he called a man named Ryan Porter six times. He is a dirty EMT, sometimes he “patches up gang bangers.”

Hank is under fire for pulling a gun on Gavin Collins. The State Attorney isn’t happy, the only reason she gave him his badge back was because he was supposed to bring down key players. And, she knows that he cut Maurice loose. She threatens him and tells him he will end up back in jail if he doesn’t start making some major arrests.

Olinsky and Adam finally see Shawn Collins and the remaining two girls head into the tattoo parlor with the dirty EMT. They call Hank and the team. Adam rushes into the tattoo parlor instead of waiting for back-up, even though Olinsky tells him not to. Ryan Porter is cutting into one of the girls’ stomachs, and the other girl is lying on the floor going into convulsions. They manage to subdue Ryan Porter, but Shawn Collins gets away. Atwater and Burgress chase him down an alley, after a close call, they manage to capture Shawn Collins.

Unfortunately while Burgress and Atwater are making the arrest, a construction crew accidentally drops a cinder block on the hood of the car. The Sargent is less than thrilled when they bring the car back to the precinct.

Hank pays Erin a visit, he is not happy that Justin didn’t show up at CTA training. He gives Erin a file on a guy named Joe Cattalano that Justin was locked up with. Hank has no idea that Jay is inside Erin’s apartment.

Adam pays Olinsky a visit at his garage. He brought Olinsky a piece of the wedding cake that they tasted earlier, Wendy wanted him to have a piece. He apologizes to him for rushing in to the tattoo parlor without waiting for back-up. He gives Adam his cake back, and tells him to go work on another assignment before he gets both of them killed.

Internal Affairs agent Erica, that threatened Hank earlier, tracks down Jay and gives him her business card. She says she htinks he is a “good cop” and she would hate to see him get “taken down by a bad cop.”

Erin tracks Joe Cattalano down at a bar. She tells Joe that Justin doesn’t owe him anything, and to leave him alone. She threatens to leave a half kilo in his trunk and arrest him for it if he doesn’t leave Justin alone.