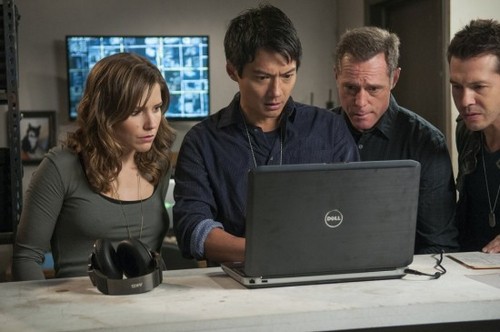 Tonight on NBC their new riveting police drama CHICAGO PD airs with a new episode called, “Now is Always Temporary.”  On tonight’s episode Sergeant Platt (guest star Amy Morton) sends Atwater (LaRoyce Hawkins) and Burgess (Marina Squerciati) to arrest a hoarder where they discover more than just clutter.  Did you watch last week’s episode?  We did and we recapped it here for you.

On last week’s episode Voight (Jason Beghe) and team headed to a house that’s been associated with a number of top gangs. Events at the search resulted in Ruzek (Patrick Flueger), being encouraged to seek some counseling which mightt have lasting repercussions professionally and personally. Meanwhile Halstead’s (Jesse Lee Soffer) temper rose when he came in contact with some unwelcomed people from his past. Jon Seda, Sophia Bush, Elias Koteas, LaRoyce Hawkins, Marina Squerciati, and Archie Kao also star. Robin Weingert, America Olivo, Amy Morton and Josh Segarra guest starred.

On tonight’s episode more is learned about Halstead’s (Jesse Lee Soffer) dislike of the Rodiger family and it’s family relationships all around as Olinsky (Elias Koteas) shows a paternal side with his daughter Lexi (guest star Alina Taber) in an attempt to protect her and as Voight’s (Jason Beghe) trying to help his son who has recently been released from jail. Meanwhile the Intelligence Unit investigates a counterfeiting operation after discovering some high end cloth-like paper. Sergeant Platt (guest star Amy Morton) sends Atwater (LaRoyce Hawkins) and Burgess (Marina Squerciati) to arrest a hoarder where they discover more than just clutter. Jon Seda, Sophia Bush, Patrick Flueger and Archie Kao also star. Amy Morton, Stella Maeve and Josh Segarra guest star.

Tonight’s episode of Chicago PD opens with Erin, Hank, and Jay eating dinner. Hank receives a phone call and they rush off. Erin and Hank arrive at a hotel room, and a crazed man is holding a woman hostage in her underwear, her face is covered in a white powder. He hands the woman over, and then shoots himself in the head.

Detective Olinsky is home with bickering with his ex-wife about the “noise agreement” he signed. He heads to work and receives a phone call from his daughters’ school.

Hank, Erin, and his team are trying to figure out what the crazy artist Dean Masters was running his mouth about before he shot himself. Lindsey sits down with the woman he was holding hostage. For some reason Dean thought that the woman was “trying to set him up,” he told the escort service to send Nadia.

Officer Burgess and Officer Atwater head to a woman’s home, she appears to be a hoarder. They keep receiving phone calls from neighbors that trash is piling up at her house. Atwater wants to arrest her, but Burgess decides to give her one more chance to clean her house up.

Voight and his team head to a club, they bust a pimp and a bunch of prostitutes. The pimp directs them upstairs to a room where Nadia is servicing a customer.

Olinsky heads to Lexi’s school and meets with her principal. They found weed in her locker, and she is suspended for a week. Lexi claims they aren’t her drugs, but Olinsky isn’t buying it.

Lindsey questions Nadia about Dean Masters, the artist that killed himself. Nadia is apparently only 17, and strung out on heroine. Nadia says she doesn’t think anyone wanted to hurt Dean, but gives Lindsey a name, Noel Harris.

Voight heads to Noel Harris’s shop, and realizes he is a money launderer. And, he has also been shot in the head. Dean Masters was in way over his head in something. They head back to his apartment and find a secret room where he was printing money.

A Secret Service Agent, Joe Hill, pays Hank and his team a visit. Hank has called him to help with their money laundering investigation.

They pulled Dean’s phone records and realized Nadia has been lying to them. She was texting Dean 45 times a day, he was more than just her client. Lindsay heads back to Nadia’s cell and questions her again. Nadia says she lied because she was in danger. There were men with a gun that took her picture that were after Dean, she doesn’t know who they are, but they drove a delivery van with a “jesus fish” painted on the back door.

Olinsky tracks down his daughter Lexi’s boyfriend Brendan, and wants to know if he has anything to do with the joints they found in her locker.

The team tracks down the “jesus fish van” to a radical Church group, and get a search warrant for their headquarters. They barge in and find several men sitting in a room with cash, and guns. The leader, Pastor Mike, claims all the money was from “church donations.”

Olinsky goes through Lexi’s phone, and finds texts proving Lexi was “holding the joints for him.” So, Lexi wasn’t lying, they really weren’t her joints.

Burgress and Atwater head back to the hoarder’s house. When they are inside they hear a noise coming from the basement, the hoarder begins freaking out and telling them they can’t go downstairs. Atwater carries the woman outside, and Burgress heads down to the basement. She finds a small boy locked in a secret room in the basement, crying.

They bring Pastor Mike in for questioning, they think someone hired Mike and his crew to kill Harris. Mike confesses that he was “contracted” by a man named Glenn Ward. They pull up an address for Glenn Ward, and head out to locate him.

Lexi shows up at her Dad’s work, she is furious that her Dad threatened her boyfriend “over a couple of joints.”

Hank and his team arrive at Ward’s (the counterfeit money printer) potential counterfeiting shop. They kick open the door, and the workers inside immediately open fire on them. They manage to avoid being shot, and capture all the men in the shop, and several hundreds of thousands of counterfeit cash. Ward is going to jail for a long time.

Lexi surprises her Dad at home. Even though she has been suspended and can’t go to the Father-Daughter dance at school, they decide to have their own dance at home.

Hank receives a phone call, and has to go pick his son up. He has been arrested after getting into a fight at a Pub. Hank is tired of bailing him out, and he tells his Dad to go “screw himself.”

Erin heads back to the precinct and picks up Nadia where she is sleeping in a cell. She promised Nadia she would “help her score a fix.” She drops Nadia off in the middle of the street, between a rehab a corner. She tells Nadia to “make the decision herself.” Erin leaves her card with Nadia and tells her if she wants a better life, than to call her. Nadia climbs out of the car, and Erin pulls away.