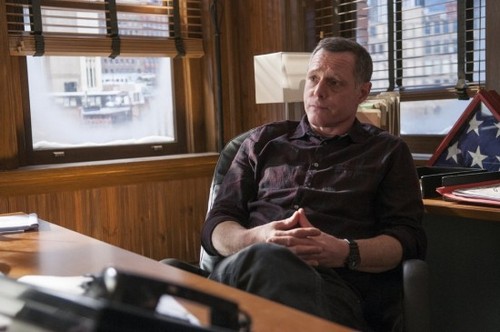 Tonight a new and riveting episode of CHICAGO P.D. airs.  In “Turn the Light Off,” Voight and the team investigate a gang-related case involving several deaths and millions of dollars in stolen cash. Meanwhile, Burgess helps the unit in an effort to prove her worth; and Platt asks Ruzek for assistance.

On last week’s episode Voight pulled Halstead’s badge when Lonnie Rodiger was found dead. After a car accident Severide and Clarke  discover the torso of Dr. Elliot who has been instrumental in putting away high profile criminals. With Intelligence down one Sumner (guest star Sydney Tamiia Poitier) is given an opportunity to prove herself. Meanwhile during all the investigation Lindsay (Sophia Bush) and Severide shared a moment. Jon Seda, Patrick Flueger, Elias Koteas, Marina Squerciati, LaRoyce Hawkins and Archie Kao also starred. Amy Morton, Ian Bohen and Robert Ray Wisdom guest star.  Did you watch last week’s episode?  We did and we recapped it right here for you.

Tonight’s episode looks like it is going to be great and you won’t want to miss it, so be sure to tune in for our live coverage of NBC’s Chicago PD at 10:00 PM EST! While you wait for our recap hit the comments and let us know what you think of Chicago PD, so far?  Check out the sneak peek of tonight’s episode below!

RECAP: Erin is listening to music inside the store of a gas station out of nowhere an old friend of hers comes back saying she’s wanted to talk to her. She brings up that she has been clean for thirty days now, Nadia is her name and she thanks Erin for trying with her; what she did for her really stuck with her. Erin leaves and tells her to take care of herself. Adam is talking to Alvin about a computer, Kim bumps into him by mistake and she looks a bit freaked out. Platt asks Adam to talk; she wants him to do something on Friday and to wear something nice also. Antonio comes downstairs with Hank and tells them to follow him because they’ve got themselves a massacre; they arrive at the crime scene which is at a bank vault. Hank asks Jay what happened, turns out two guys are dead and one is wounded; they’ve stolen a ton of money. Hank wants to talk to one the guys who were shot and live, he asks what he saw. There were four guys with mask and black sunglasses, they ask the man where he was and it turns out that he was in the washroom at the time. He was hit running out of the washroom, he took a glimpse of their foreheads and necks; he says that men who did it were black. The other man who’s the head of security tells them a bit about what went down; Hank asks him if they can see the footage from the security cameras.

Kevin asks Kim what’s going on with Adam, because she’s been acting weird around him. She says she doesn’t know what’s going on. Hank is back in the HQ, Alvin and Adam arrive too as Adam is going up the stairs he notices Platt looking staring him down the entire time. Jinn shows the team the security camera footage that they got from the vault, Alvin says that he interviewed a trucker who saw a car leave and it turns out that he saw two guys remove masks and they were Caucasian. Jay sees Ally as he comes down, she wanted to come in and say hi; Jay says that he had a great time and is glad that she stopped by, they’ll be meeting up tomorrow night. Erin comes up interested in what happened; Jay says it’s a girl he knows. Sumner and Antonio come in to talk to the guy who was shot in the vault and lived; they tell him that they know he lied about the crew being black. He admits that he knows the guy and that he lives in his neighborhood. Sumner says to imagine his face next to the word racist in the dictionary; Dennis Novak is the man who was behind the robbery. Hank finds it hard to believe because it’s too much of a big job for Dennis, though he tells Sumner and Antonio to do more work on the case with Dennis. Adam asks what Platt is doing, she wants to seal the deal; she wants to impress her father by having Adam go with her to this dance thing to pretend she’s found someone. Adam agrees to help out, Alvin then asks to talk to Adam. Adam and Alvin will look after the man in the hospital who was shot at the vault. Hank, Antonio, Sumner and Jay are at Dennis’s place, they enter prepared for anything they kick open the door and find a bunch of bodies in the house, there are about six bodies.

Jay has found two different types of bullets in the room; Hank wants to find a name of the person they’re looking for. Adam and Alvin are tailing the man right now; Alvin asks when Adam decided about Wendy. Adam asks if Platt has come out from the closet yet, Alvin said that he knew a guy who was on the football team and was gay. Adam spots a man cleaning the car window, when the man opens his window; the person throws the bucket through the window and the water splashes all over him. Turns out it wasn’t water, it was oil and the man threw in a match along with it. Adam chases the man who was disguised as the homeless man and threw the bucket through the window, but he misses him. Adam runs back to Alvin to check how the guy is doing after being burnt. It doesn’t look good for him. Alvin found the man’s phone before it was brunt along with him. The Columbians are behind the robbery, all the calls from the cell were from someone in prison. Hank and Antonio tell the man at prison that his brother was burnt alive by the Columbians. The prisoner doesn’t understand what happened; Hank and Antonio want an answer. Turns out the prisoners cell mate are a Columbian, and his name is Miguel. The man who was burnt alive was named Lukas; his brother says he didn’t double cross him. Hank and Antonio leave after getting the info, Hank calls back at HQ to tell his team that they’re looking for a man named Miguel.

Miguel has been visited several times and has been called by the Latin Kings, they ad more photos to the board of people who could be involved. A man named Gonzales is who Adam thinks was the person who torched Lukas. Hank talks to Gonzales saying that he knows that he was put into this job because of Latin Kings. Alvin makes the camera face the wall to intimidate the man. They find out that Rollo ordered for two whores, they need to have a cop to disguise themself as one; Kim steps up and wants to do it. Erin doesn’t want Kim to go in with just a random whore, she knows someone who used to work for Zendals. Adam talks to Kim saying she doesn’t need to do it, she only wants to step up and prove Hank that she can do this. Turns out that Erin’s friend who’s going to help Kim is Nadia, she then says that she’s sorry for letting Erin down before. Kim and Nadia are out waiting to be picked up, a van arrives and they both get inside.

Nadia and Kim arrive at the house, they get to the front door and are brought to a man who just finished snorting up some cocaine. Miguel asks what’s going on, his men tell him that they ordered whores. Miguel wants Kim and Nadia to have some cocaine. Miguel wants alone time with Kim, Nadia looks worried when Kim leaves. Kim goes to the washroom first and informs her team how many people are in the house and where they’re at. As Hank and the team enter the room the gang get up with their guns, Miguel ends up beating up Kim in the bathtub. Adam arrives and sees Kim, she tells him to go and follow Miguel who got out by climbing out of the window. Adam and Miguel fight, but Miguel punches him in the face and runs away. Nadia is very upset that she had to do cocaine though she’s been clean for so long. Miguel is trying to run away, but Jay is not letting him go without a fight. Jay and Miguel are fighting inside of some woman’s home, Jay ends up getting beat and have his head stomped on while lying on the ground. Miguel gets away. Hank wants everyone to leave the house, but he wants Alvin to stay; they’re going to interrogate the gang member the hard way. Hank asks where the eight million is hiding at. The gang member gives in and agrees to tell Hank where they’re hiding it.

Hank and his team end up finding all the money, they find it in giant silver cases in the back of a truck. Hank tells his team to give him a moment with the man who’s walking up, Hank tells him that this is the beginning of a partnership. Antonio tells Kim that she did well. Adam is waiting for Platt, she and him go out to dinner with her father. Platt’s father is telling Adam stories about himself, he’s being extremely loud while talking also. He asks Adam what he likes the most about his daughter Platt, Adam says that he likes her because she doesn’t take crap from anyone and is one tough cookie. Platt’s father makes a toast to his daughter. Jay is eating spaghetti at the home of the girl he’s seeing. She thanks Jay for coming because her parents like seeing him, it turns out that’ll she be leaving soon. Her name is Ally, her parents are asking why she won’t move back. It looks like Ally might move back. Platt drives Adam back, he says that he had a great time, he asks why she didn’t say that she’s gay. Turns out that Platt isn’t gay, and says that Adam shouldn’t drop accusations like that. Erin is with Nadia, they get out the car and hug each other. Erin says that she will check on Nadia everyday to make sure she’s doing all right. Sumneris at the office late tonight and so is Antonio, Sumner ends up finding a photo in her desk; it’s a picture of a woman. Sumner asks what she was like and Antonio says she was a pain in the ass, he mentions how she was damn good police. Antonio is asked to go to Hank’s office to speak. The chief wants to say that Antonio and Hank did a good job on the case, it turns out that their case has been given to someone else now.