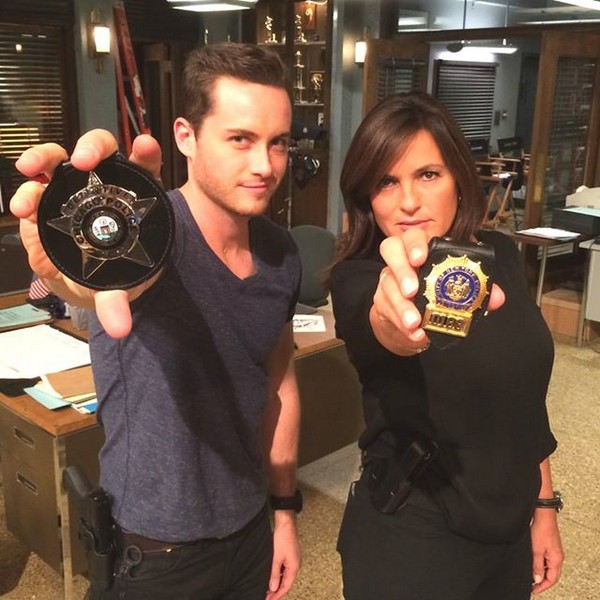 Tonight on NBC their riveting police drama Chicago PD continues with an all new Wednesday November 19, season 2 episode 8 called, “Assignment of the Year.” On tonight’s episode, a moneyed diamond dealer is killed on Antonio’s [Jon Seda] watch. Halstead [Jesse Lee Soffer] and Lindsay work the case, but they must go undercover in an uncomfortable location.

On the last episode, part of the crossover event found our intelligence unit joined by detectives from New York’s special victims unit to help solve the pedophile ring case. Ruzek (Patrick Flueger) and Det. Amaro (guest star Danny Pino) along with Halstead (Jesse Lee Soffer) and Antonio (Jon Seda) continued to hunt for the link to foster care and child trafficking. Meanwhile Burgess (Marina Squerciati) and Roman (Brian Geraghty) tried to find the shooter from the hospital after using surveillance footage to identify him. Platt (Amy Morton) showed her deep respect for police and the dangerous work they do by honoring their fallen brother. Did you watch the last episode? If you missed it, we have a full and detailed recap right here for you.

Tonight’s episode of Chicago PD kicks off with Antonio outside a restaurant arguing on the phone, Asher and his girlfriend come out arguing.  Asher tells Antonio to leave her there and they get in the car.  After some bickering, Antonio agrees to pull over and get Asher a pack of cigarettes.  He comes out of the gas station and gets in the car and realizes that someone has shot Asher in the head while he was in the store, he calls for an ambulance and back-up.  Hank arrives at the scene, and Antonio is upset he blames himself.  Hank reassures him that they will get it straightened out.

At the station Trudy corners Alvin because she knows he doesn’t have a place to stay.  She wants him to join the “Officer Next Door Program.”  It’s where cops move in to shady neighborhoods for practically free and it supposedly makes the neighborhood safe.

Antonio gets bad news at the police station.  Apparently Asher had prior in London for buying and selling stolen diamonds, and Asher wasn’t just fraternizing with a felon – he was working for him.  He learns that he could lose his badge and even his pension.  Antonio’s wife calls the station but he won’t take the call.

Roman shows up at work, and Antonio is furious with him since he hooked him up with Asher.  He wants to know how long he knew Asher and if he ran a background check on him.  Roman says he had no idea, and apologizes to him.  Antonio tells him he is on the case and he needs all his info on Asher, anything that could lead to his killer.

Asher’s husband Leila comes in and Antonio demands to know who Terry is, the guy they were arguing over at the club.  Leila says that she and Asher had a threesome with Terry, and lots of other guys.  Antonio wants to know why she isn’t upset over Ahser’s death – she explains that she didn’t have anything to do with his death and she was in the club where they left him.  She explains that the compartment in the SUV had over $3 Million worth of diamonds in it.  Antonio threatens her that if she had anything to do with Asher’s death he is going to “nail her.”  When Leila leaves Hank sends Atwater to follow her and tail her.

Olinsky is holed up in an office at the station trying to rewrite his paperwork on a typewriter to make it seem like he has been on the force longer than he has.  He sends Ruzek to pick up more forms for him to fudge.  Hank corners Roman and implies that he had something to do with Asher getting killed.  Hank asks him if he ever had sex with Asher’s wife Leila, and Roman insists he didn’t.

There were no cameras at the gas station, they have no prints, and no bullets.  Erin pulls up information on a jeweler named Roman Wells, he used to be in business with Asher.  Since they went their separate ways he has had four lawsuits and a restraining order against him.  Antonio and Owen head to Roman’s store and when they arrive he locks himself in a panic room.  He refuses to come out so Owen pays a tow-truck driver to attach his chain to the door and pull it off the wall.

Atwater and Burgess are sitting in the car watching Leila, she comes out of the nail salon and gets in her limo and they follow her some more.  Erin and Jay decide to go undercover to the sex club that Leila and Asher used to go to.  Erin befriends the bartender and asks about Terry, but the bartender says he doesn’t work there anymore.  Erin convinces the bartender to go in a sex room with them, they reveal that they are cops and he confirms that the guy in the picture at the jewelry store is Terry.  Erin and Jay get a break and learn what jewelry store Terry is headed to so he can sell them.

Antonio heads to the jewelry store in the morning, and the jeweler reveals that the diamonds Terry brought in are fake – and worth $20.  Antonio tells him to set up a meeting with Terry and have him come in so they can pick him up.  Meanwhile, Burgess is still following Leila – but she receives a phone call and while she is talking she loses her.  Atwater and Burgess find her in a taxi and follow her, she runs in to a building and two police officers stop Burgess and Atwater and say they received a phone call from Leila saying someone was following her.  They clear up the misunderstanding and run in the building and learn that Leila already left out of the back.

Terry shows up at the jewelry store, and Roman and Antonio decide to take him down themselves.  Terry makes them while he is talking to the store owner in the park and pulls out a gun and starts shooting at them.  Antonio manages to take him down without getting shot and they bring him in to the station.

They bring Terry in for questioning and he insists that killing Asher was all Leila’s idea and after they got the diamonds they were supposed to run off together.  Antonio meets up with Leila, she reveals she is boarding a flight to leave the state and go to Florida in three hours unless they have a warrant for her arrest.  She hands over her phone records and credit card information to prove that she hasn’t had any contact with Terry, and she says that she had her manager cut him a check for his security detail the night that Asher was killed.

The internal investigator arrives and Alvin hands over a folder full of documents proving that Owen’s security company was all just a front for an undercover investigation – the investigator buys it hook, line, and sinker and after he leaves Antonio thanks Hank and Olinsky.