BY Caryn Doti Chavez on May 7, 2014 | Comments: one comment
Related : Recap, Television 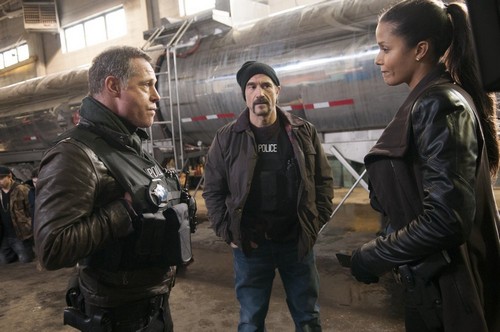 Tonight anther new and riveting episode of CHICAGO P.D. airs. In “My Way,” The Intelligence Unit members are dismayed to learn that Pulpo has been released to help locate a deadly cartel leader. Elsewhere, Ruzek deals with difficult news; Lindsay has a brush with her past; and Jin faces a problem.

On last week’s episode the intelligence unit raced against the clock to take down those responsible for the bombing – The Intelligence Unit worked to find the bombers. Even with government agencies in the mix, Voight (Jason Beghe) and his team worked the case from their own angles and connections. Lindsay (Sophia Bush) and Antonio (Jon Seda) questioned doctors who handled the transplant surgery for an Ambassador from Syria, but no clues emerged. Olinsky (Elias Koteas) got some solid intel and the team worked from there. It was a race against time as they realized there may be additional bombs targeted to detonate. Meanwhile Burgess (Marina Squerciati) sat vigil for her niece whose life hangs in the balance. Jesse Lee Soffer, Patrick John Flueger, LaRoyce Hawkins and Archie Kao also starred. Taylor Kinney, Sydney Tamiia Poitier, Eamonn Walker, Amanda Righetti and Charlie Barnett guest starred.  Did you watch last week’s episode?  If you missed it we have a full and detailed recap, right here for you.

On tonight’s episode a dangerous cartel leader is at large and intelligence has to rely on Pulp to track him down – Commander Perry (guest star Robert Ray Wisdom) notifies the Intelligence unit that Pulpo (guest star Arturo Del Puerto) has been released to help track down a dangerous cartel leader. This doesn’t sit well with our team as he kidnapped one of their own and no love is lost between sides. Meanwhile, Ruzek (Patrick John Flueger) gets some difficult news as a blast from Lindsay’s (Sophia Bush) past comes back, giving us a glimpse at where she came from. Voight (Jason Beghe) reminds her that she’s come too far to screw it up. At the same time we learn something about Jin (Archie Kao) that is bound to be a problem. Jon Seda, Jesse Lee Soffer, Elias Koteas, Marina Squerciati, and LaRoyce Hawkins also star. Amy Morton, Kurt Naebig, Ian Bohen, Sydney Tamiia Poitier and Billy Wirth guest star.

Cmdr. Perry notifies the unit that Pulpo has been released to help with a case; Ruzek gets difficult news; when a bit of Lindsay’s past resurfaces, Voight reminds her how far she’s come.

Tonight’s episode begins with Sgt Stillwell giving a stern warning to Voight based on things he’s been hearing about him. Meanwhile, Adam asks Kim to talk and talks about stopping the mixed signals because he is going to give his relationship with Wendy a real go this time. She is visibly upset.

A visitor, Charlie, comes asking for Detective Lindsay. When asked to leave a note for her he doesn’t give a last name. He says that she’ll remember him despite the fact that it has been a while.

Antonio comes in to talk to Voight and asks him why he is so surprised about the heat he is getting given his history. As Voight shares he didn’t think they’d make it so obvious, they are interrupted by a call and take off across town.

They arrive at the crime scene and see officers, a lot of dead bodies and are told the bloodbath was a result of cartel leader Munoz. When the Commander asks for more details he comes to the conclusion that Pulpo, the only one who can likely help, needs to be released in an effort to help them get to Munoz. He gets really upset when he realizes not everyone agrees with his decision and Antonio shares his feelings that it is insanity. The Commander gives his order and yells to Antonio that he better get his head on straight or he’ll be taking some vacation time.

Voight talks with his team later and tells them that they have to do their job. Despite their high emotions about Pulpo, after losing one of their own because of him, Voight tells them they know this comes with the job. Pulpo is taken out of the van and takes a deep breath. Once inside, Pulpo gets very cocky and doesn’t immediately answer Voight’s question about what he knows about Munoz. He laughs about the excuse they gave to get him out of prison. As he is mocking everything, Voight gets infuriated and punches him and again demands information on Munoz.

Halstead and Lindsay pay a visit to a parolee who is a computer hacker to try to get more dirt on Pulpo. They start checking phone calls he’s made and suspicious information. Meanwhile Pulpo is still being very arrogant and is following orders by making a phone call and helping to plot a drug pick up by coordinating all the details with his connections. Voight tells Pulpo that if things go any differently than the plan…and as he tries to continue…Pulpo interrupts and tells him he knows the deal and everything will be fine. He gives Antonio, who is going undercover, a code to say so that the “cowboy” will supposedly know he is an “okay” guy.

Antonio meets with the cowboy and is immediately asked to open his shirt so he can see if he is wearing a wire. Antonio is visibly nervous. He finds a way to talk his way through it and get the guy off his back. He earns his trust and he foregoes opening his shirt. He walks out with the cowboy and gets in a semi as part of the transaction to take place. All systems go and everyone is in place in their undercover positions. Once inside the location he was to go to, he hands off the keys to the guy he was to meet and they will follow him with the tracking device they put on the truck.

Halstead and Lindsay visit a former, and possibly current, love interest of Pulpo. She explains that she hasn’t seen him and hopes he is still in prison because he is crazy and scares her. They tell her they see that he made hundreds of calls to her but she plays it off as him being the stalker-crazy type. Just as they are leaving, the woman’s son comes walking out and they get a feeling that the little boy likely is Pulpo’s son.

Burgess and Atwater talk in the car about her finding a man when they get a call. There are two gunshot victims. The witness saw the shooter and when Burgess shows a picture of Munoz and asks if the is the shooter, she says yes.

Because the truck had a tracking device, the team knows exactly where to find them and show up, guns drawn. As they grab everyone, Voight is interested in the leader there who he asks where Munoz is. The guys says he has no idea. Just then they learned about the shooting and that the shooter was ID’d as Munoz.

Antonio comes back and tells Pulpo that he sent them on a wild goose chase because Munoz never showed. Voight is pissed that Pulpo is playing them and doesn’t like how the deal was set because Pulpo knows he is in a good position and will keep taking advantage.

At the station, Lindsay comforts the little boy as Voight brings Pulpo’s baby mama to him with some warnings. He finally gives in when he sees Voight is not playing and that he has no bargaining power. He is too worried about his lady and his son and agrees to give up the information they need to find Munoz. While Antonio and Voight are suspicious, he assures them this time he is telling the truth. Pulpo wants to see his son.

When Antonio walks to his desk, Olinsky questions the way they are running this and Antonio goes ballistic. He reminds them that every time he sits at his desk and looks across he sees the empty desk that used to belong to his partner who is not there any longer because of Pulpo. Everyone is quiet and just lets him be emotional.

Wendy comes to see and talk to Adam and tells him she is going to stay with her parents for a while. She tells him how much he has changed since he’s been at this unit and she just can’t take it anymore. He later goes off alone and holds the ring he had intended to give her. As Lindsay and Halstead are walking out, Charlie appears and is happy to see Lindsay. She hugs him but reminds him he is not supposed to be in Chicago. Lindsay is very uncomfortable until he finally leaves. Meanwhile, Mia is visited by Stillwell. She is uncomfortable when he kisses her and makes it clear that until he gets everything worked out on his end, she doesn’t want to continue seeing him.

Voight tells Jin to keep an eye on Sumner and to tell him if he suspects anything that would make him believe she is the pipeline to Stillwell. Meanwhile, at the party that Pulpo told Voight about, they walk around in search of Munoz knowing he is supposed to be there. As things are going well, snipers take shots at the crowd. Antonio spots Munoz and keeps his eyes on him as the crowd goes crazy. Munoz takes out a gun but Halstead hits him in the back of the head with a perfect shot from above.

Jin meets with Stillwell as he gives Jin very clear instructions on what he expects him to be keeping an eye on. We now know the pipeline.

Despite Antonio’s objection, Pulpo is allowed to hug his son and girlfriend after Munoz is caught. The woman hands him something but it goes unseen. Shortly after, as Voight is talking to Lindsay about staying away from Charlie, they hear gunshots and run. They see officers down, including Antonio…and no sign of Pulpo or his family. What a sad ending tonight! Let’s hope our fave detective pulls through and that Pulpo gets what he deserves!