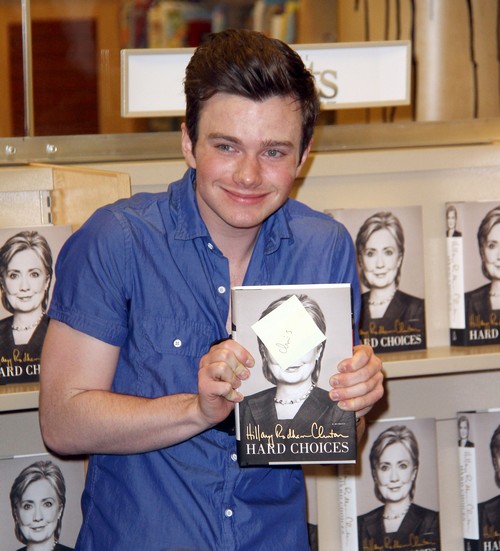 Fans of FOX’s sinking ship Glee were in an uproar today when Chris Colfer announced on Twitter he was leaving the show. The singer and actor tweeted, “Due to personal issues I have been let go from the cast of Glee, explanations will come shortly.” Colfer has played the part of lead character Kurt Hummel since Season 1 of Glee debuted on FOX.

According to Colfer’s manager his Twitter account had been hacked, and Chris Colfer will in fact be appearing in the sixth and final episode of Glee. Colfer’s manager went on to explain that he is currently on a flight with no WIFI and couldn’t have sent the tweet. FOX TV also took to their Twitter account to clear up any confusion and tweeted, “We’ve been alerted that Chris Colfer’s twitter account has been hacked. Rumors of his dismissal from Glee could not be further from the truth. We love Chris and look forward to working with him again this season.”

We are still a little perplexed as to why someone would hack a celebrity’s Twitter account and post something so lame. You would think that if you were going to go through the trouble of hacking into a verified account, you would stir up a little more drama than just claiming you were fired from a TV show that hardly anyone watches anymore.

Unless, this entire “Twitter hacking” was just a publicity stunt, and if that was the case then the masterminds behind it were successful. And, let’s be real, Glee needs all of the publicity it can get. The last season’s ratings were dismal, and border line embarrassing for FOX, they renewed it for a sixth season just to tie up loose ends and give the fans some closure. Then, the sixth season was left off from the Fall schedule, and pushed to midseason. Now, rumor has it they are dropping the episode order from 22, down to half of a regular season.

Do you think Chris Colfer’s Twitter account was really hacked? Or, is this some sort of desperate publicity stunt? Let us know what you think in the comments below!