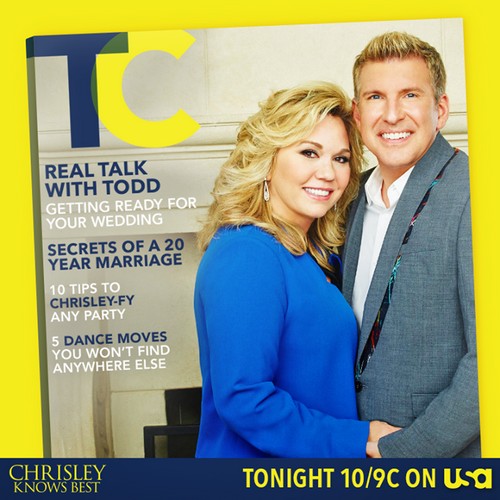 Tonight on USA Network their new reality show Chrisley Knows Best ends season 2 with an all new Tuesday December 16, season 2 episode 12 finale.  On tonight’s finale episode called “Still Chrisley After All These Years” join us for one more crazy night as Julie Chrisley and Todd Chrisley honor their anniversary with a charity event that is threatened by a date mix-up

On the last episode, when Julie’s demanding pregnant friend visits, Todd’s home life is disrupted. Did you watch the last episode? If you missed it, we have a full and detailed recap right here for you.

On tonight’s episode as per the USA Network synopsis, “Julie and Todd throw a charity event for breast cancer to celebrate their wedding anniversary.”

Chrisley announces to the family that Julie has passed her two-year mark and is cancer-free (she had breast cancer and had undergone a double mastectomy). To celebrate this and their anniversary at the same time, they decide to do an event that will benefit an organization like the Komen Foundation. They decide to hold a barbecue that Saturday. Julie wants a more rustic location and a relaxed party, whereas Todd wants it to be fancier. When they go visit the location, Julie tries to take over, saying the party will be executed to his vision. However, Julie says she wants the party to be fun.

Julie and Tanya work together to start making the appetizers for the event. Todd goes to the store to order some cakes. “I want like, the Nicki Minaj cakes,” he says. The baker pulls out a small cake, and Todd says: “No, those are the Leann Rimes cakes.” When Todd gets home, Julie tells him this is all the food they have. She is ready to give up because she can’t produce enough food for 100 people by tomorrow. He says they need to come up with another plan, and she suggests the barbecue again, saying it’s what they should have done to begin with.

Meanwhile, Chase is blaming his grandma for the screwed up invitations. Savannah has to call the scheduled entertainer to try and get him to reschedule for tomorrow. She tells Chase if the guy can’t do it, the entertainment is on him.

The barbecue ends up being a success. Savannah’s surprise musical guest, Brett Young, is even able to show up. Chrisley gives a speech about how Julie is the center of the family and his universe.