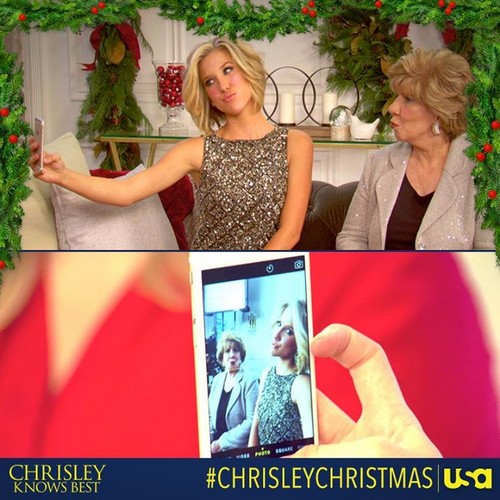 Tonight on USA Network their new reality show Chrisley Knows Best continues with an all new Tuesday December 17, season 2 episode 12 called “A Very Chrisley Christmas,” and we have your weekly recap below. On tonight’s episode, an inside look at the Chrisley family’s holiday traditions featuring previously unaired footage.

On the last episode, Julie and Todd honored their anniversary with a charity event that was threatened by a date mix-up. Did you watch the last episode? If you missed it, we have a full and detailed recap right here for you.

On tonight’s episode as per the USA Network synopsis, “The Chrisleys gather around the tree and look at footage from the second season.”

The Chrisleys decide to go through their past memories in honor of Christmas and to give eachother gifts. Chase’s parents give him a globe to help him learn geography. “There’s a lot of countries,” he says.

Granny gets a crystal wine decanter, “for you to put flowers in,” Todd says.“I’ll just fill it right up,” she says.

A flashback plays of nanny “supervising” Savannah on her date by drinking at the bar across the restaurant, among her other shenanigans: hanging up on Todd and Julie because she can’t use the cell phone and her driving a car with Chase as the passenger.

Todd receives a “special” gift, a muzzle. The family asks him to try it on. “The reason we gave you the muzzle is you never shut up,” Chase says.

A montage of Todd insulting various members of the family after he says he never does anything to hurt anyone’s feelings, including him telling Savannah she and Chase should change their names to Google because they know everything.

Savannah’s gift is an ugly Christmas sweater. She immediately says she is going to return it.  She asks Todd if he would date any girl wearing that sweater, and he says it depends who is wearing it.“That gift right there will keep all of the boys away,” Todd says.

The first clip of Savannah shows her trying to go on a date in denim shorts, and Todd refuses to let her leave the house. Then, she tries on a pair of sparkly heels and Todd tells her “less if more.” As she tries on an outfit, he says “You do not look 16.”  Then, her crush on a surfing instructor bothers Todd, who tells her to put a lifejacket on.

Grayson receives a family four pack to Funopolis, which he can use all year.  A clip plays of Grayson trying to control a go kart that Julie is driving.

Then, he gets in a fight with Chase where Chase says he is handsome but Grayson is just cute. Another clip plays where the whole family is at dinner talking about how much Chase and Grayson talk about tits. Todd tells him to stop because he is only 8 years old.
The last Grayson clip shows Todd telling him to shut up and eat his food because he isn’t involved in the conversation, and Grayson says he is involved in every conversation this family has.

A clip shows where a spiritual adviser comes to “fix [Todd’s] aura,” according to Julie. “You can’t come in here, we’re smoking weed,” he tells the kids.

In another clip, Todd is trying to learn about RVs in anticipation of getting one and calls Julie on the phone for help. Then, he tries to help out at a barn and fails miserably.

Julie receives a spa treatment. Savannah whines that she didn’t get one, and she is told it is the thought that counts. Grayson also whines, and Julie says she needs this three-day vacation and that she is the only normal one in the family.

A bunch of clips of the family failing to help her play in succession, and then one of her getting lip injections. “You look like a blowfish,” Savannah tells her.